France has voted, and the results from the first round of the French election underlines that this is going to be a choice between two very different futures.

The two top vote getters were Marine Le Pen of the National Front and Emmanuel Macron, labeled by the media as an ‘independent centrist’ but a long time Socialist who served as a minister in in Socialist President Hollande’s failed regime. With 89.7 percent of the vote counted, Macron has 23.7 percent of the vote and Le Pen 21.9 percent. They are followed by conservative Francois Fillon, with 19.9 percent, and far-left candidate Jean-Luc Melenchon with 19.2 percent. So Macron and Le Pen will face off for the second round of the French election on May 7th to determine who will be president of France.

It’s worth keeping in mind that France’s massive ‘computer error’ that gave 500,000 French expatriates overseas two votes hurt Le Pen’s total the most, since France’s expatriates tend to vote Left and are pro EU. Needless to say,France’s Socialist government refused to postpone the French election or even investigate what happened until after the election was finished. Marine Le Pen still getting into the second round in spite of this blatant attempt to rig the election is a hopeful sign to her and her supporters. So is the unbelievably biased press coverage, which is reminiscent of the American media’s coverage of the Trump campaign.

Emmanuel Macron is a 39-year-old life long Socialist who in spite of his rhetoric and attempts to paint himself as an ‘outsider’ pretty much promises more of the same. He favors staying in the EU, retaining the euro as France’s currency and continuing to accept Muslim refugees into France. He claims that the increased terrorist attacks are Fillion’s fault for reducing security jobs…which doesn’t make sense if you see how these attacks have increased dramatically during Hollande’s administration, which Macron was part of. If more security personnel were needed, why didn’t President Hollande and his people hire them? The fact that Hollande was elected with almost a block Muslim vote gives us a probable answer.

Aside from his stint as one of Hollande’s ministers, Macron has no experience as an executive in government or even as a legislator. He is also a firm globalist, which pleases France’s elite and has given the euro a slight boost in the market. But there’s no indication, at least from where I sit that he is going to be able to do anything about France’s 10% unemployment rate or its sluggish economy since he is, at heart, a Socialist. Since he also will receive the vast majority of France’s Muslim vote, there’s not much chance the security situation will improve, in spite of his constant promises to the French that “I will protect you.’ The answer to France’s woes in that area doesn’t lie in simply hiring more bodies but in ending the flow coming in and taking a good look at the refugees already here. And Macron isn’t going to do that.

The pro-EU, status quo nature of Macron’s policies was emphasized to the French public when every major EU minister came out publicly to endorse and congratulate him, while excoriating Marine Le Pen in the most caustic, negative terms.

Marine Le Pen presents a very different road for the future of France. She wants France as more of an independent nation state again, an independent France free of the EU (and Germany’s) domination.

She has has pledged to lower taxes and to allow the French to decide whether to stay in the EU or not via a referendum. She’s promising& to revitalize France’s manufacturing sector which has been crippled by high taxes and strangling regulations by cutting both. And she has pledged to ‘immediately reinstate border checks’, to expel illegal migrants and to cut down drastically on all immigration. She is beyond a doubt the national security candidate as opposed to Macron.

Projections for the second round of the French Elections? A number of factors could influence it. For one thing, there will be one on one debates, and it remains to be seen how Macron will do against a more seasoned Le Pen. Further attacks – or more ‘computer errors’ by the Socialist government could also effect the outcome.

The support for the two candidates is also bisected in an interesting way. While Macron (light blue) was popular in Paris, Bordeaux and the large, more sophisticated cities of France’s northwest like Rennes and Nantes, Le Pen (beige) got a great deal of her support from Northern France’s ‘rust belt,’ the Northeast and the more conservative cities in the interior and Mediterranean coast, something oddly reminiscent of the recent U.S. election. Fillon’s support (dark blue) was based in Alsace and scattered areas around the country, including his home region where he got 30% of the vote. The small circle represents Paris, which has a socialist mayor and where Mélenchon(purple) did well. 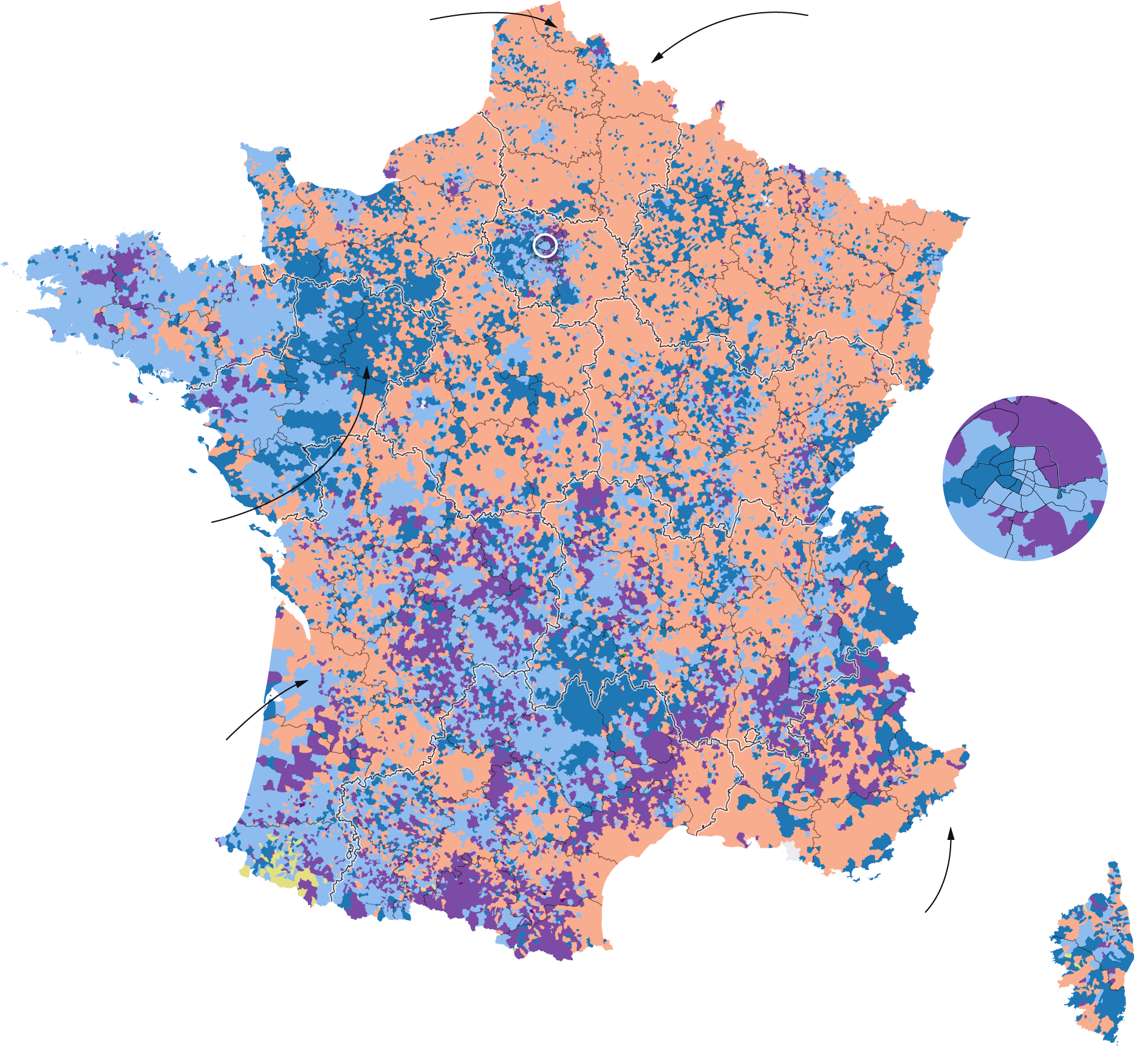 Another similarity is that since the press obviously favors Macron and has pretty much done its best to brand Marine Le Pen as a racist, it automatically has effected the polls the way it did in America, with many National Front supporters being wary of voicing their preference.

The vote in France is strictly popular with no electoral college, so it remains to be seen what kind of effect these factors may have.

And both candidates have something of a monkey on their backs image-wise. In Macron’s case, it’s the fact that he is married to a woman 24 years his senior whom he met while he was still a teenager and she was his married French teacher. Macron is 39, which makes his wife 63.  Rightly or wrongly, many French see this as an odd pairing, and there are lots of snide remarks behind the scenes about Macron being a ‘mamma’s boy’ or even a closet homosexual. In still heavily Catholic France, this matters in some quarters, especially in view of his limited experience.

In Le Pen’s case, she is still struggling to get out from under her father,an unapologetic racist and anti-semite. Even though it was Marine Le Pen who threw him and his anti-semitic cronies out of the National Front, you can hardly read a story about Marine Le Pen in either the French or foreign press that doesn’t mention this connection and associate her with it…and of course, without mentioning her role in removing him from her party.

Another factor that won’t be apparent until the second round of the French election is held is how many votes each candidate will pick up from the other candidates who didn’t make the cut. It’s not an easy call to make.

‘Conservative’ Francois Fillion would more likely be thought of as a very left leaning/centrist Republican in the U.S. He got about 19.9% of the vote, conceded early and promptly endorsed Macron in a speech riddled with picque, telling his supporters to vote for him. Fillon hates Le Pen because he feels she stole a lot of his voters, although major corruption scandals that surfaced during the election probably had more to do with him getting knocked out of the box.

How many of his voters will follow his orders? Macron is indeed a Socialist and many of Fillion’s voters are equally concerned about the economy and national security. It’s an open question how many will vote for Le Pen.

The Socialist Candidate, Benoit Hamon also quickly endorsed Macron. No surprises there, and most of his voters, about 7%, will likely vote for Macron.

Far-left candidate Jean-Luc Mélenchon had 19.6 percent, and hasn’t endorsed anyone.Oddly enough, some of his votes could go to Le Pen because they both agree on one important issue. He too campaigned on getting France out of the EU and job creation.

France has a clear choice…a change from it’s present course or more of the same. The future of France likely hangs in the balance.

Trump turned the debate over funding a Southern border wall into a brilliant reality show, with Pelosi and Schumer as his hapless foils . . . and much more. Funny day today, with a lot of people who are important to me needing me. That’s not to say that they are [Read More]

Even as Paris burns, America’s media and other Democrat establishments demand that America institute the socialist policies that are destroying Europe. Paris burns — and the people call for Trump. The mainstream media truly believes in global leadership. Trump’s desire to be America’s, rather than following in his predecessor’s footsteps [Read More]