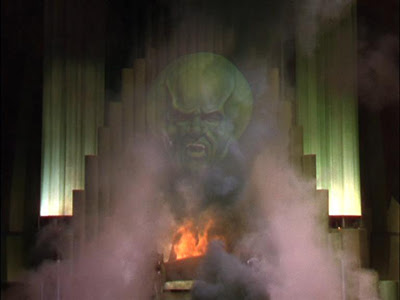 One of the great things about being a part of the Watchers Council isn’t the fame,the blogging groupies or the obscene amounts of money to be made but the great people you get to associate with.

For me, one of those people has always been the founder of the Watcher’s Council,the Watcher Emeritus who first conceived of the idea back in 2003.Ever since I first joined the Council back in 2005 and since his retirement, he and I have been in touch off and on, and I’m glad to say that’s he’s now back in the blogging world at last on his spiffy new site Crazy Bald Guy.

I finally talked him into an interview where he weighs in about the Council, its origins and blogging in general, insights from someone who was there at the creation, so to speak.

Rob: How did you first get involved in blogging?What attracted you to it?

Watcher Emeritus: It was around the time that KSM was captured that I first started blogging… I had an interest in politics for a while before that, but never quite knew what to do with it. Sometime during the Clinton impeachment I got into the habit of arguing about politics online in various forums, and this habit intensified throughout the 2000 election… after 9/11 and the War on Terror began I started to notice that just about everyone had a blog. I decided to get one of my own so that I could have my own place to vent.

Rob: What first gave you the idea for the Watcher’s Council? How did you come up with the original bylaws and format? Was it trial and error,or did you pretty much have a good idea of how to proceed?
Watcher Emeritus: The Watcher’s Council came about when I noticed there so many blogging carnivals out there… I thought they could be a good way to promote blogs, but they seemed to have a bit too much randomness in the links being presented. I figured having some sort of vote would be the best way to filter through everything and try to put the focus more on quality than quantity. I thought on it for a while, and eventually came up with what I figured would be a pretty fair way to handle that kind of vote… then I settled on a few basic requirements for members to follow, and got started recruiting.
Rob: What was the most challenging part of getting the Council together? The biggest surprise?

Watcher Emeritus: Well, putting it together wasn’t so bad… the hardest part was probably just dealing with all the emails back and forth trying to spread the word about it. I was surprised that there seemed to be quite a few people interested in joining right off the bat, though I think it did take a while to completely fill up all the open spots. I also wrote a PHP script for myself to help me with all the vote counting.

Rob: When approximately did you stop being the Watcher and why?

Rob: What was your initial reaction to finding out we’ve kept it going all this time? Were you aware that the members kept the Council going after you left? What was your reaction?When approximately did you become aware we were still alive and kickin’?

Watcher Emeritus: Even after I quit blogging I would still lurk here and there, and comment once in a while in a few places, so I could see things were still going… nice to see it still going strong for so long.Yeah, I was glad to see that it didn’t end just because I had to stop.

Rob: While keeping to the basic format and traditions you set up,the Council has evolved quite a bit. How would you compare then and now? Do you feel the quality of the content overall has improved, declined, or remained the same? (loaded question, that last one!)

Watcher Emeritus: If you had to make a few minor adjustments in order to keep things going, I can’t really complain… without you it wouldn’t be there at all anymore, so thanks for all the work you’ve put into it. And it’s hard to really compare between then and now, the membership was always in flux even when I was still running things. The current members have been writing a lot of quality stuff though, my hat’s off to you all. It’s really nice to see that at least a few people have stuck around this whole time.

Rob: As a blogging pioneer, what are your thoughts on how blogging has evolved and where it’s heading?

Watcher Emeritus: I guess maybe I have been blogging for a while now, but it’s hard for me to call myself a pioneer… by the time I started my own blog it seemed to me like everyone else already had one. It’s been interesting to see the impact that Twitter has had on blogging… I notice that many bloggers now also use Twitter, and some bloggers have even scaled back their blogging to the point where they are using Twitter almost exclusively. You can’t say very much in a single tweet, but I find Twitter is a very useful way to fill in the gaps when I just can’t seem to cough up a full blog post… it’s also a handy way to find new things to blog about.

Watcher Emeritus: Hmmmm, not sure. I know what Reddit is, but don’t think I’ve ever used it before… I don’t have a Facebook page myself, so all my Facebook experience comes from following links to there from blogs, not the other way around. When I’m not fussing with my blog or reading another blog somewhere else, I tend to be on either Twitter or Youtube.

Rob: Any words of wisdom or thoughts in general you’d like to pass on to your loyal acolytes?