The latest demand by the folks at Black Lives Matter and their ‘allies’ is to defund the police departments in the cities they and the Antifa pals have rioted in. The carnage in these cities is supposed to be a message and a warning, I suppose.

And why not? Apparently some politicians seem to like the idea just fine. So do a number of celebs, who are busily raising funds to promote this. 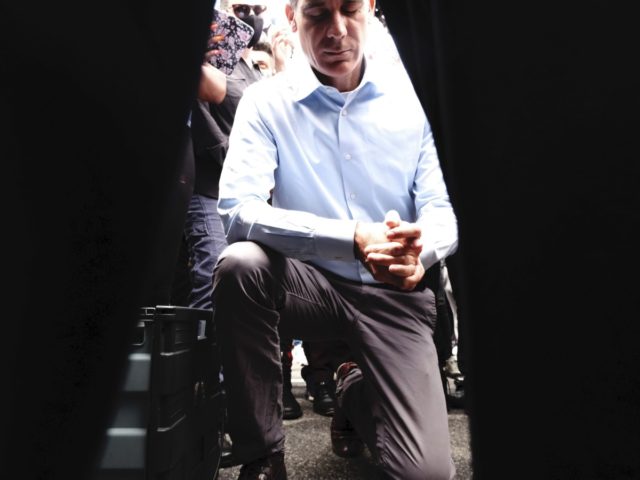 In Los Angeles, Mayor Eric Garcetti referred to the LAPD as ‘killers’, and took to his knees in surrender in front of a number of ‘protestors’ and promised to defund the LAPD.

He has in fact defunded the LAPD to the tune of $150 million and cancelled a budget increase that had already been approved. He also pledged to cut another $250 million “to be focused on our black community here in Los Angeles, as well as communities of color, and women, and people who have been left behind, for too long.”

Every city department will be affected by major budget cuts to satisfy the people who rioted and looted the city.

“We all have to step up and say: What can we sacrifice?”

Racial justice, he said, was “worth sacrificing for.”

Of course, Asians, Jews, Latino, Black and White business owners who saw their businesses go up in smoke are not included as having ‘sacrificed.’

Spokespeople for the LAPD said that aside from reducing manpower, the cut may mean firing all or most of the civilian employees…like 911 operators.

The director of the Los Angeles Police Protective League, Jamie McBride responded, to no real avail:

Apparently he does, that is is Back Lives Matter and Antifa say so.

And Garcetti’s capitulation is by no means enough for the ‘activists.’ They are insisting that the police budget be cut by 90% . I kid you not.

Of course, now that thousands of criminals have been freed in California and New York just prior to the riots, it’s a perfect time to defund the police, right?

And it’s not just LA.

In Minneapolis it got even more phantasmic.

Mayor Jacob Frey, who jumped all over his own police force also went to capitulate to the mob, without success. They basically chased him out of their ‘protest’ and no matter how many boots he licked it wasn’t enough. Not even for his own city council, let alone the mob.

She also said when asked who people can call if they’re being burglarized or otherwise victimized that”Having someone to call is a sign of privilege.”

The new system, of course, will be police free or at best have a small group of disarmed security guards for the well connected…like City council members, you know.

Of course, you should be willing to abandon your right not to have your home broken intot. Otherwise, you’re a Racist. Right? Especially if you do call the cops..oh wait, there won’t be any cops, remember?

You see, your either an ‘ally’ willing to beg on your knees, express shame for your white privilege and cheerfully allow the people who have broken into your home to make off with whatever they want or you’re a white supremacist.

As a matter of fact, serious conversations are being held right now about defunding the police forces in  Boston, Chicago, Philadelphia, Detroit, Seattle, and Portland. My my, all Democrat run cities that had major riots and places where Antifa and Black Lives Matter are welcomed warmly by these cities politicians for the most part and literally can get away with murder.

Now this actually might work. Cities that wish to do this should be allowed to, but only under the following conditions:

1) The inhabitant of these cities should be allowed to vote on whether they still want police. Of course, if the city government decides to defund police no votes are necessary in true socialist style. Who wants to hear from those racists anyway?

2) Those inhabitants of the city who are stinking racists and decide they want police should have a designated time, say a month or two to leave the city limits. Such peopel should also be vetted, of course.

3)Now that these cities no longer have these white supremacists…and probably a number of black, Asian and Latino citizens who also like the idea of a fully funded police force like the race traitors and Uncle Toms they are, we can proceed.

4) These cities would be independently run and governed. The inhabitants could vote (even felons, and illegal migrants, there might be quite a few of those) in municipal elections but not in federal elections)

5) Since the police would likely leave since they no longer would have jobs, they can be hired by the feds or the state to maintain barriers around these cities. They would not be permitted to enter these newly free cities, nor would the inhabitants of these self governing enclaves be allowed to exit without special permits and positions.

6) This would also have the benefit of satisfying those inhabitants who are woke and like the idea of no police to limit their activities. Whatever system the ‘government’ of these cities decide to enforce what’s left of any laws they still have is their business. Also, since some inhabitants have left, there would be ample empty housing available for section 8, crack houses, or what have you as well as for the citizens to live in.

8) The Federal and state governments where these newly independent enclaves are situated would enter into negotiations with these new autonomous enclaves to come to a fair and equitable settlement for payments or arrangements for  state or federal facilities and buildings.
This could actually work. These people would no longer be a real part of a country they consider racist, sexist, fascist, capitalist, what have you.  On the other hand, the rest of the United states of America would no longer be responsible for the welfare, financial help, law enforcement or government of these independent enclaves. They would be able to live out their socialist dream.