The German Elections are over, and the German people mostly voted for the status quo. And in that word ‘mostly’ lies a possibility that rather than crashing and burning, Germany might just manage to avoid suicide and remain a western, European nation.

Angela Merkel did indeed win a fourth term, but with the worst result for  her party, the  CDU/CSU Union since 1949, and one that assures that in order to govern, she will need coalition partners. And that won’t be all that easy to assemble. Even worse for her is a possible splintering of the long standing CDU/CSU party…and the surprisingly strong showing of the Right in the form of  Alternative für Deutschland (AFD). Here are the numbers:

Mutti Merkel will need 316 seats to govern. Let’s look at who these parties are…

The Union  is the CDU (Christlich Demokratische Union Deutschlands, Christian Democratic Union of Germany) , in union with the CSU (Christlich-Soziale Union in Bayern, Christian Social Union in Bavaria). The CSU is to the right of the CDU, although both are pro-EU. And the CSU is seriously talking about a split, since they’re concerned how Merkel’s stance on unlimited Muslim migration will effect them in their Bavarian stronghold.  The CSU dropped from 49% to 38.5% thanks to Merkel, and have already announced a turn to the right, particularly regarding Muslim migration.

The SPD is the Sozialdemokratische Partei Deutschlands, Social Democratic Party of Germany). It’s a party of the Left that supports socialism, is pro-EU and has already said it will not join a coalition with Merkel. The Social Democrats and their candidate Martin Schulz came in a distant second, with a post-war record low of 21 percent.

Die Linke, as you can gather from its name is a far Left party that includes the former German communist party (PDS). They’re an unlikely partner for Merkel.

Grüne (Bündnis 90/Die Grünen, Alliance 90/The Greens) is a very Left party with enviro-politics as their major focus. They might be prepared to do a deal with Merkel for the right price.

And finally, AFD (Alternative für Deutschland, Alternative for Germany) — Anti-EU, nationalist and very much against Merkel’s continued importation of Muslim migrants to Germany. This is the first them they have passed the threshold of votes needed to get them into the Bundestag, Germany’s Parliament. and while the chart lists them last, in terms of seats they have now gone on to become Germany’s third largest party.  They not only won’t work with Merkel, they have pledged to oppose her at every turn. As AFD Leader Alexander Gauland said last night when the returns came in, “We will chase Mrs. Merkel, and we will take our country and our people back!”

By gaining seats in the Bundestag, AFD has dramatically boosted its visibility and qualifies for state financing.

AFD’s rise is even more astonishing when you realize that the party was essentially split between an unapologetic right wing party led by Gauland and Alice Weidel and a more moderate wing headed by Frauke Petry, who helped form the party in 2013. If AFD had been united, their results might have been even more stunning. 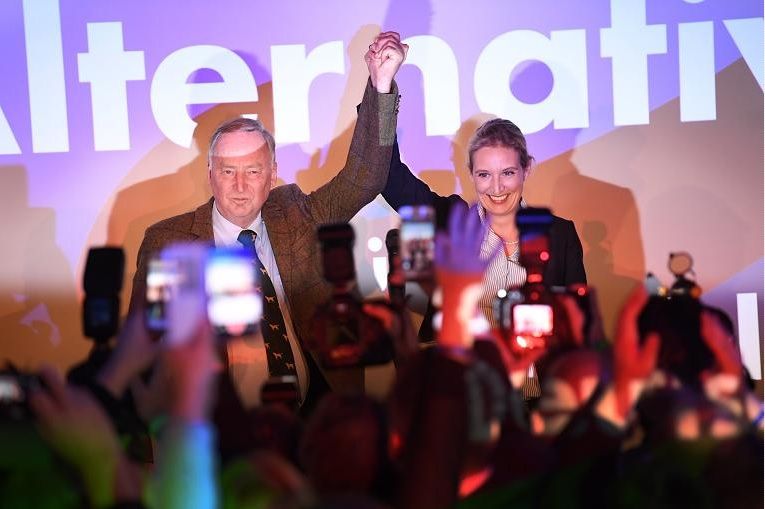 In fact, Frauke Petry announced just after the election that she would sit in the Bundestag as an independent in opposition AFD’s future will depend on whether the party continues to splinter or is able to unify over its core issues without being distracted. 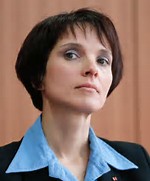 The Left’s reaction to AFD’s success was quite typical. Rent-a-mobs in Leipzig tried to storm the town hall, where votes were still being counted, and where the AFD was holding their election party. 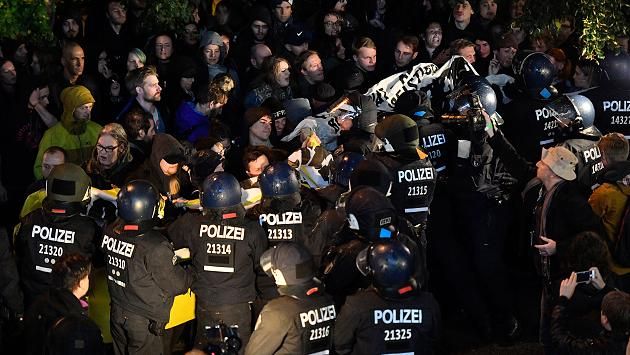 The same thing occurred in Berlin where another AFD election party was being held, and elsewhere, with protesters screaming things like ‘Nazis Aus!’ waving signs, breaking windows and generally acting out.

Unsurprising, since the German press (largely Left leaning) branded AFD as Nazis, and even German Foreign Minister Sigmar Gabriel and other Merkelites made the idea of “real Nazis” entering the Bundestag a real issue during the campaign.

Are the AFD Nazis? While some of them likely lean in that direction and have questionable views on certain subjects, I’d have to say generally speaking that this is more a typical case of Leftist hypocrisy and frankly, projection. After all, there were no AFD brown shirts trying to violently storm CDU/CSU events! Nor does AFD regurgitate the Nazi’s economic views, which were frankly socialist.

The election itself basically revolved around two main themes. Merkel is seen as the comfortable status quo. Germany is still prosperous, and a lot of its graying population (more than half of the 61 million voters are aged 52 or older) saw Merkel as a symbol of stability.

The other theme is the simple fact that many Germans feel unsafe in their own country. Women in particular are uneasy walking alone at night, riding the trains or using public swimming pools for obvious reasons. Whole areas in German cities are becoming no-go areas for non-Muslims, and the tax money needed to support the Muslim migrants is taking a huge bite out of German wallets. Many people are simply fed up, and the election results show that as well.

The German elections show a nation negotiating Dead Man’s curve. If Germany continues its skid towards destruction, it will end up with Muslims ruling it under sharia as one of the most important countries in Europe literally falls to invasion. Ironically, given how Merkel touts it, that would also lead to the end of the EU, something that’s pretty close to happening anyway since many nations in the EU aren’t going along with the diktats of Merkel and her minions in Brussels when it comes to doing to their countries what Germany and Sweden have done to theirs.

If the Germans decide that enough is enough, if the AFD remains united and goes more mainstream, if Germany reaches a consensus on the harm Merkel’s allowing a surge of Muslim migrants into Germany has done, they may yet make the turn on Dead Man’s Curve and save their country.

In that case, this year’s German elections may be the beginning of Germany’s return to sanity.

And Mutti Merkel? She will likely end up a Chancellor again, but her term will be anything but smooth. I’d be very surprised if she finishes it.

Jihad In Germany? Gang with Axes Injures 5 At Train Station

March 9, 2017 JoshuaPundit World Comments Off on Jihad In Germany? Gang with Axes Injures 5 At Train Station

A crowd of people in Germany waiting for the train at the Dusseldorf Station was attacked by a gang wielding axes who plunged into the waiting crowd. At least 5 people were injured, one seriously including a 13-year-old girl. The German police have two suspects in custody, including one who [Read More]