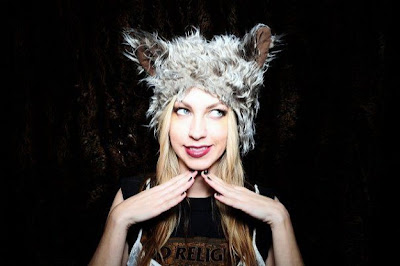 Our own Courtney Messerschmidt, AKA GrEaT sAtAn”S gIrLfRiEnD was recently the subject of an in-depth interview with veteran journalist Carl Prine, in which she succeeded in dazzling him utterly! Here’s a slice:

Prine of Departure: Ready for your interview?

Courtney Messerschmidt: do you need mt size for fashion tips?

Prine of Departure: What’s “mt” size? I don’t understand. Is that one of your terms? What’s up with this strange language you speak? What are ‘deets?’ Do you talk like this all the time, even in class?

Courtney Messerschmidt: All the fashion stuff you post. mt should have been ‘my as’ in my size Deets is slang for details. Ppl say it all the time — even some teachers. I can converse normally — believe it or don’t — Foreign policy stuff is somewhat dry — for whatever reasons and I enjoy ‘amping’ (which means to amplify — or ‘make more bigger sounding’) it up into ‘FoPo” and attempting to endear it to the next posse of young ppl.

Prine of Departure: Just a moment. I’m sending this to Starbuck for a translation.

Prine of Departure: While we’re waiting for the translation (and Starbuck adding fluency in your unique, Nell-like dialect to an OER bullet point), is “Courtney Messerschmidt” your real name, or a nom de guerre?

Starbuck’s Translation: Ha! I had to ask hr about “deets” the first time I heard it. The first two sentences are hard to understand without the context, though.

People say ‘deets’ all the time, even some teachers. I can converse normally, believe it or not…

The rest is cut and dry, ending with “attempting to make it more appealing for the next generation of young people”. Though I question whether you can “amp” something “up” to an abbreviation.

It gets really interesting when she starts speaking German and French.

Courtney Messerschmidt: hmmm in the purest sense. amplifiers turned rock and roll into rock so…it could be said that “…you can amp something up into an abbreviation

Prine of Departure: I feel like an archaeologist who just discovered the hieroglyphs of an exotic civilization.

Prine of Departure: So, is “Courtney Messerschmidt” your real name?

Courtney Messerschmidt: yes sir. prob the reason i got so interested in military stuff cause ppl were always asking about it and going on and on about Willi Messerschmittt and his ME’s. When i was 1st allowed online i took the nom d guerre of courtneyme109. The ME is a play on words of course and the 109 is scrambled code for 1990 — when i was born. Plus the BF 109 combat plane was sleek, stylish, fast and ahead of her time. Just. Like. Me

Prine of Departure: OK, what’s the deal on your site with all those chicks draping over each other or blowing pouty kisses or otherwise vamping about while you link to Foreign Policy? Do you ever worry that guys come to your joint just to catch a peek of sophomores in their underwear?

No one comes to Line of Departure to see me in underwear. In fact, I think they would pay cash money not to suffer the image.

My BFF (best friend forever) Lauren was camera happy and we used it in “Soft Power.” The site. Just Exploded. Off the charts and viral. We knew we had stumbled onto something because the stats were showing up at the highest ‘diplopolitary’ levels of American, Allied and Enemy Commands. From MoD to State to Pentagon — even NATO, Shang Hai Coop, UN,Revolutionary Guards, CENTCOM, Royal Saudi Navy, Saudi Modesty Police — it was unreal. The email became much the same — most requesting — you guessed it — more pictures and more essay/analysis.

By the time “Surge Baby Surge!” hit the scene — GsGf was the darling of intelligentsia that have followed it every since. It also drives certain girl hating elements in sunny climes east of Suez batty to have subjects like their precious Payambar E Azam Military Drills sexed up with a provocative pic.

We tend to think of it as a necessary tool. After all — on a post about Hiz’B’Allah — would you rather see a pic of the creepy, overtly robust Body Part Collector Rocket Rich General Nasrallah or a cute girl?

The true answer though is to get people interested in foreign policy — admittedly a very very dry boring assetted subject. Injecting passion in a sexyful, fun to be with kind of way with levity and deathly seriousness seems to be working.

Courtney Messerschmidt: Readers tend to check my links and down load the pics. Am reliably informed there are some worthy screensavers and desktops at GsGf.

Prine of Departure: OK, so how old are you? Are you still in school? Are you going to take a commission? What’s with your kink for COIN?

Prine of Departure: I just sent those paragraphs to Starbuck. I feel almost like one of those American tourists hanging outside the Sheraton in some dusty third world capital. If I talk really slowly, I’m sure you will understand me.

Courtney Messerschmidt: Fixing to hit legal limits in all 50 states– later this month in fact!

Simply can’t wait to be able to present an ID that isn’t fakebelieve or borrowed. School is a killer right now, kinda grinding my way through. Out for the summer but about to return. Dang it.

My particular worldview was and is shaped by several counterminiously connected things. Being raised up by ancient veterans in a society full of them (and antique Civil War Battlefields), ensured that in the debate about Pre Surge Iraqi Insurgency chiz — Courtney did not want America to lose. I was one of the first to download the Counter Insurgency Manual, reached out to several of the authors and gained invaluable insight. And funnily enough — it totally backed up my neophytical worldviews.

COIN is a slow. Nasty. Business — and it isn’t into time constraints imposed by political considerations. Yet it works.

OK, so what are you going to do when you get out? State Department? More school? U.S. Marine Corps?

Several think tanks and authors have expressed interest in internships, gigs (that means a paying job) and positions. Currently drafting and redrafting a book on Future FoPo

I wanted to join the Army and drive panzers but they won’t let girls into armor and my admittedly atrocious driving skills turns Guderian’s admonishing admonishment that a panzer’s engine is as big of a threat as the 120mm stiff thing sticking out that projects high velocity projectiles into a double entendre for sure!
State needs to be drastically — I would use the term fundamentally — transformed. I’m just the girl to do it.

Prine of Departure: By “Future FoPo” you mean an analysis of future foreign policy goals and challenges of the U.S. and our allies? Do you have a name for it yet?

Prine of Departure: Starbuck isn’t getting back to me with those translations.

Prine of Departure: OK, well, let’s speak in a language we both understand: The diplomatic, economic, military and intelligence elements of strategy and fashion.

I suppose we could take as an Ur-text something by Clausewitz or your fave, Stephen Walt, but let’s find something much more meaningful than either of them.

I really think the tips for ensuring good bar service are similar to our policy of buying Iraqi militia loyalty during the so-called “Surge.”

Have a messy roommate who doesn’t clean up after herself and keeps living off our our maid service? NATO!

“Disorganized co-worker” screams a lack of unity of command.

Courtney Messerschmidt: Every threat to internat’l order after Cold War involved a gov that fell short of Western and economic standards.

Every security problem that Great Satan felt called upon to address would be alleviated, if not solved altogether, if the regimes responsible for them could be remade to American specs.

Any unelected regime is illegitimate — and they all tend to project misery, gendercide and, intolerance far beyond their weight class and their borders. Tormenting their own people and their neighbors. There is simply no reason to tolerate their existence.

Another reason why realism or realpolitik in Internat’l Relations is deader than S’Ddam. All that ‘forever quest’ that the sad, played ancient amoral corrupt cult of stability chasers wasted their substance own has totally failed to bring stability. It has ensured wars, genocide and terrorism.

Many 2 dimensional critics freak and insist yours truly is insisting on military D Day style ops to remake the world. Uh, no.

Illegit regimes and should be hounded and confounded at every opportunity using every trick in the book until magically transformed into tolerant, egalitarian societies with a penchant for periodic, transparent elections, a free, uncensored press, a nat’l treasury under public scrutiny, a military under civie control and an independent judiciary under elected Gov oversight.

And yes, Andrew Sullivan is also flacking the interview in his Daily Beast column….

Remember us when you’re Secretary of State, Courts!