DACA, as most of you might know, stands for Deferred Action for Childhood Arrivals. It was a policy President Barack Hussein Obama implemented by executive order. It allows allows illegal immigrants who entered the country as minors, to receive a renewable two-year period of deferred action from deportation and makes them eligible to legally work in the United States.

DACA was presented by the former president and his allies in the press as both just and humane. After all, these ‘Dreamers,’ to use the catchy label coined by the president and the policy’s exponents, had come here as children, this was the only country they knew and of course they should be allowed to stay, shouldn’t they?

But that was only the beginning. The president’s next step, in November 2014 was DAPA (Deferred Action For Parents of Americans) which was supposed to give a similar de facto amnesty to parents of the Dreamers. That led to a major influx of unaccompanied minors coming across our borders, mostly male teenagers or in some cases older and posing as teenagers. The idea was to get here, get Dreamer or refugee status and then, send for the rest of the family including Auntie, Grandpa, distant cousins and pretty much anyone else thanks to America’s very lenient family reunification programs.

DAPA was merely announced by President Obama. It wasn’t even dignified by a Presidential executive order, nor even a regulatory ruling. The President may have misplaced his pen, because he simply announced it, and that was that,banana republic style. A few months later, in response to lawsuits from several states, an injunction was issued stopping the DAPA program in February 2015, and President Trump finally put an end to it in 2017.

So what is to be done about DACA? The Pew Trust,whose numbers may be somewhat inflated says that 1.7 million people might be eligible, although U.S. Citizenship and Immigration Services (USCIS) only has received about 850,000 applications. As an aside, each application costs $450, and that amounts to a total of $382,500,000. I’d certainly like to know where that money went, wouldn’t you?

President Trump has announced he is considering ending DACA. Part of his motivation is an agreement he made with 19 State Attorney generals to postpone a pending lawsuit declaring DACA illegal and unconstitutional (which it actually is) and demanding redress from the Federal Government for state funds expended because of it. The president asked them to hold off until he has a chance to study the issue a bit more. But as these states have informed the president, their patience is running out.

There are several ways this could go. The President could keep the program in force in exchange for things he wants from congress like tax reform, and ObamaCare repeal and funding for his budget. But if he does, he will lose political support from his base and get no credit from the pro amnesty Left anyway, as well as dealing with that lawsuit. Or he can curtail it,in which case he loses nothing, because the pro amnesty Left and their RINO allies will throw a tantrum no matter what he does.

The fact is that DACA is illegal. It is yet another piece of fallout from America’s refusal to protect its borders and base immigration on its needs rather than allowing a tsunami of illegal migration.

On the other hand, there undoubtedly are illegal migrants who were brought here as young children illegally and consider this their home. It would be tremendously unjust to give these migrants preference simply because of their proximity to our border over the many people who want to come here and are stuck in the bureaucratic nightmare that involves. An illegal migrant is still an illegal migrant, not an ‘immigrant.’

Still, I think there’s actually a solution to this problem that works as far as respecting America’s migration laws, retaining fairness for legal migrants and addressing the humanitarian issue posed by some DREAMers.

First of all, DACA needs to be ended. There’s no question that it’s both illegal and unjust. And even worse, holds people in limbo, so it solves nothing.

Some of the DREAMers could be allowed to stay under certain conditions. They would have to be able to document 10 years residency in the United States from what I call unimpeachable sources; school records, health records, employment records, DMV records if available,tax returns, that sort of thing.

They would be of good character, have committed no crimes,not be members of any questionable groups or organizations,  have learned to speak English, and not be on public assistance. They would not be eligible for U.S. citizenship but would receive a special permanent residence permit that would allow them to live and work in America.The citizenship restriction would not apply to illegal migrants who have served in our military and who otherwise qualify.

And it should clearly be understood that this residence permit is a one time act of clemency, not an entitlement or precedent. If necessary, legislation would need to be passed clarifying this. 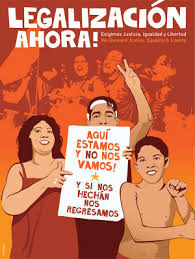 As non-citizens, they would not be allowed participation in any family reunification program to bring relatives to America from overseas, to hold public office or to vote.

While it might be wise to put a numerical quota on these residence permits, I believe that anywhere from 30-50% of the DREAMers would qualify to stay in America should they choose to. It would mean they have forfeited certain rights given to legal migrants, but that they could continue to live in America.

The government shutdown ended so fast, I didn’t get to do an illustrated edition — but the posters are too good to waste, so I know you’ll enjoy them now. I don’t know if the facts in this poster are true. Do you?

Forum: Who Wins The War Between Trump And California’s Sanctuary Policies?

Every week, the WoW! community and our invited guests weigh in at the Watcher’s Forum, short takes on a major issue of the day, the culture, or daily living. This week’s question:Who Wins The War Between Trump And California’s Sanctuary Policies? Dave Schuler:Honestly, I have no idea. I think that [Read More]

Vassar Bushmills (I should have waited a day, too hasty on the Nullification part, needed a rewrite.) (I originally titled this piece “Lincoln Fought a Civil War to Keep the South in the Union, What Will Donald Trump Have to Offer to get California to Leave?”. It started out a little [Read More]