According to Israel’s Hebrew calendar, today marks the Jubilee celebration of Israel’s Six Day War and the liberation of Jerusalem. Take a good look at the three men standing there, along with Israel’s Deputy Foreign Minister Tzipi Hotovely, Dr. Yitzhak Yifat, Tzion Karasenti and Chaim Oshri.

they took a tour of the Old City as part of the festivities, retracing the exact steps these three men, then young paratroopers in the Tzahal took on that day, from the Lion’s Gate until they reached the 2,000 year old stones of the Western Wall. They were the first Jews to stand before the Kotel in 19 years after Jordan seized it and ethnically cleansed every Jew from the Old City in 1948.

The picture they’re holding is an iconic photo of these three men, taken originally by David Rubinger. They all signed it and gave the copy of it to Minister Hotovely. Here’s a larger version of it: 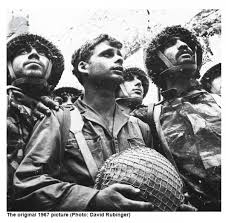 When these men first saw the Kotel, it was not what is today. The Jordanians used it as a trash dump, and scribbled obscene graffiti on it. But the awe these three young soldiers had upon reaching it shows on their faces. Besmirched and vandalized, it was still the Kotel, the Western Wall. Afterwards, (and as some tell it, when there were still a few Jordanian snipers not yet dealt with) Chief IDF Chaplain Rabbi Shlomo Goren came to the Western Wall with Torah scrolls to thank G-d and blow the Shofar, celebrating the end of Israel’s long exile from its holiest site. 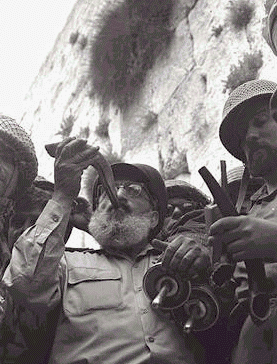 One of them, Tzion Karasenti expressed exactly what that meant to a crowd of foreign students from around the world studying in Israel at the Interdisciplinary Center in Herziliya and at Hebrew University, who were invited to come along and participate in the tour. He told the students that that the moment they reached the Western Wall in 1967 was the moment when the beating heart of the State of Israel was restored.

Deputy Foreign Minister Hotovely also had some remarks to make. She said that “the longing to reach the Western Wall, and the tears of the paratroopers who returned to the Western Wall after 2,000 years of prayer, are the best answer to those who are trying to sever the deep connection between the Jewish people and their capital.”

“We are celebrating a great period,” she added. “The unification of the city under Israeli sovereignty was the moment when every person of every religion could walk in Jerusalem. Our duty to liberate the city is to preserve a united Jerusalem and to strengthen its status so that the world recognizes Jerusalem as the capital of Israel.”

This celebration comes  just days after UNESCO passed yet another anti-Semitic UN  Resolution trying to deny the Jew’s claim to Jerusalem.

They simply don’t get it. Jerusalem, especially the Old City is united with the Jewish people again. All the UN resolutions, hatred and sophistry Israel’s haters can muster isn’t going to change that. No threats are going todo that. No bogus offers of ‘peace’ and ‘full relations’ are going to change that, because the Israelis have already seen what that means. Fifty years is not such a long time in the almost 6,000 years of Jewish history. It is barely yesterday.

Jerusalem is now what it once was, the beating heart of Israel and the Jewish people, just as Tzion Karasenti said. With G-d’s help and Israel’s strong right arm, it will remain so.

Thanksgiving And The Giving Of Thanks

November 23, 2017 JoshuaPundit Culture, Social Issues Comments Off on Thanksgiving And The Giving Of Thanks

Thanksgiving is upon us, our unique North American Holiday (yes, our Canadian friends celebrate it too, but on a different day a month earlier). Oh, I almost forgot. It’s also celebrated ( and properly so) as a national holiday in the Caribbean Republic of Grenada, every year on October 25. [Read More]

Astronomer Johannes Kepler -“O, Almighty God, I am thinking Thy thoughts after Thee!”

December 28, 2017 Puma ByDesign Culture Comments Off on Astronomer Johannes Kepler -“O, Almighty God, I am thinking Thy thoughts after Thee!”

American Minute by William Federer “O, Almighty God, I am thinking Thy thoughts after Thee!” wrote astronomer Johannes Kepler in The Harmonies of the World, 1619. Johannes Kepler was born DECEMBER 27, 1571. An attack of smallpox when he was four years old left Johannes Kepler with crippled hands and [Read More]

“Confederate”: Both HBO and its doubters double down on racial canards

HBO is in trouble for producing “Confederate,” an alternate history in which the South won the war. The irony is that HBO and its foes are both wrong. (Wolf Howling wrote this post.) If you study early America, you will find that racism did not pop up overnight during the [Read More]