Were we divided prior to Trump’s election in 2016?

The chart below shows presidential favorability percentages from Eisenhower through Obama. The source is a Pew Research article

from January 2017 before Trump took office. 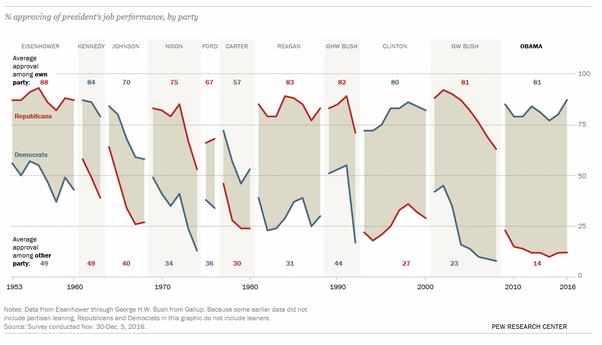 The higher the bottom number, the less division. Note that prior to the Clinton era, the opposing party averaged 30–40 percent approval. Since Clinton, approval has fallen off a cliff, with Obama averaging just 14% approval among Republicans.

The chart supports the hypothesis that division in America has grown since the Clinton years. So this is not a new phenomenon.

As an older American, I’ve been alive and aware for most of the time covered by the above chart. The idea that Trump has only 5% approval ratings among Democrats (source: Gallup

) makes this era even more divisive than 1968 when to put it bluntly, America was on fire with political assassinations, riots, and anti-war protests.

Given the situation with BLM protests, looting and riots, 2020 is looking increasingly like 1968 – but we’ve still got a ways to go.

If it’s not a new phenomenon, it’s not going to be cured by removing Trump. All that’s going to happen is the Democrats will have their man in power, and the GOP will be the ones calling for #RESIST, but the country will be no closer towards unity.

I’ve seen Democrats write that removing Trump is the first step, that things can’t get better with him in power. Why is that? This ignores why Trump was elected in the first place, and reflects continued ignorance of the concerns and needs of the Trump voters. Many Democrats simply write them off by calling them racist or ignorant instead of listening to them and attempting to address their grievances.

We have forgotten how to compromise. We’ve been fighting so long that any compromise is perceived as weakness or treachery by those in our tribe. Firebrands are ready to burn heretics at the stake for questioning orthodoxy. Instead we behave as if it’s winner-take-all, and all that matters is winning.

And the country as a whole loses. That’s why foreign countries like Russia and China are acting to stir the pot and encourage dissent and discontent.

No wonder Europeans laugh at us. From their perspective there is little difference between Democrat and Republican yet we seem ready to enter into a civil war over it.

The country needs more than Biden. It needs people on both sides of the ideological divide to say “enough,” and stop demonizing the other party. We’ve got to recognize that just because someone disagrees with you doesn’t make them less of a person. And we need to find some of that tolerance that people spout about yet don’t apply to themselves.