Walking down the street once in Kyoto my wife and I were approached by a young woman. “Are you Americans?” She asked. We answered we were. She then launched into a bitter tirade calling us all kinds of names because of “What you did in Hiroshima and Nagasaki.” That was 25 years ago.

But that was one woman out of 125 million. If the majority in the country felt that way at the time I doubt we would have lived there, but Japan has a range of opinion on every issue including whether the bombings were justified.

My wife’s father was on a ship heading for Japan from Burma as part of a special ops force that had practiced for months for the expected invasion of the home islands. My father was in the Philippines under the command of Gen. MacArthur’s forces.

Had the bombs not been dropped and the expected allied casualties been as high as anticipated, chances are neither one of our fathers would have returned alive and we would not exist.

And chances are quite good that neither would the woman who verbally assaulted us. 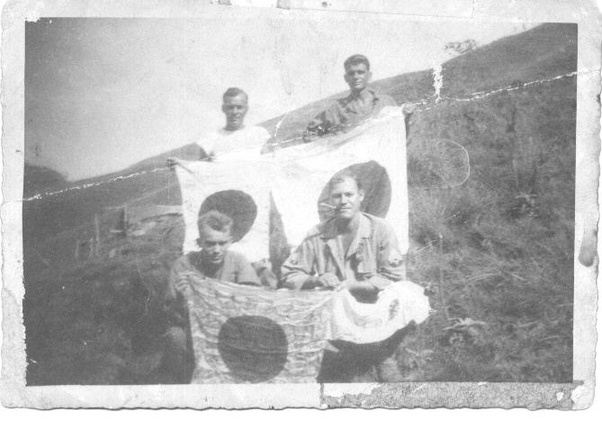 My dad, lower left somewhere in the Philippines, 1945

Instead all three of us were able to walk the streets of a free Japan, able to express our opinions without fear.

I often wonder how History would have viewed the USA if we had the bomb but not used it. “You had the capability to end the war, a war which killed hundreds of thousands of allied forces and millions of Japanese civilians, a war that left Japan fragmented and half under occupation by the Soviet Union, yet you failed to use it.” But I’m sure the wife, our children, and I would not be around to debate it.