Japan has a new growth industry that would have made the Samurai lose  their composure totally…clubs and agencies featuring what amounts to male geishas for lonely women!

There are a growing number of wealthy,  successful Japanese women that have all but given up on  traditional dating and would rather spend their time and money in an environment where  they are guaranteed to be treated well and have their fantasies catered to. And it’s quite a bit of money.

These escorts, usually referred to as ‘hosts’  inhabit some 800 venues nationwide in Japan, where it’s a a $10 billion industry. Around 260 of these Host clubs  are located in Tokyo, mostly in the  Kabukicho district with names like Romeo, Gatsby and Avalon. 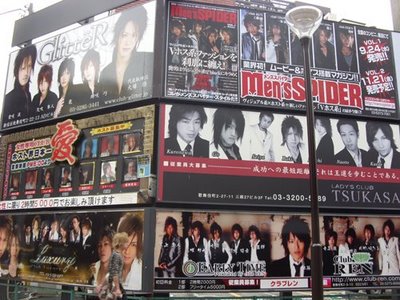 Many affluent Japanese women — ranging from 20-somethings to those in their sixties — lavish expensive gifts on their favorite hosts, buying them diamond watches, luxury cars, even apartments.

“When I was 20 a customer bought me a Porsche,” said former host Sho Takami, who owns a chain of clubs and is  planning to open up a host club in Las Vegas.

“The customers are buying affection,” shrugged ex-host Ken Ichijo on the terrace of his penthouse flat.

“We’re selling them dreams, so you lie about loving them in return for serious money,” added the 38-year-old club manager.

“Hosts exist to fill a void in someone’s life,” he said. “In this business, the host is the product. We pamper to a woman’s every need — listen to her problems, tell her she’s beautiful, act out her fantasies.”

And yes, that service can definitely include sex. Especially if the host wants presentos like an expensive watch, clothes, a car or even an apartment from his fans.

“Sex is not necessarily part of a host club’s service,” Echijo said. “But it is part of trying to satisfy the customer’s needs.”

And that’s no accident either. Japan’s birthrate is steadily shrinking and it’s population is older. the average fertility rate in Japan is only 1.4 children per woman of childbearing age, which is not even replacement levels.

In that kind of environment,  the host clubs are an outlet for women who want to be catered to and can afford the cost. And there are an increasing number of them, given how many are lonely singles with decent income and no kids.

Will host clubs catch on here in America? Absolutely, in my opinion. Many of the second wave feminists now populating America’s campuses are likely to end up as bitter and lonely women in their late 30s and early to mid 40’s with money to spend for male attention exactly the way they want it.

July 17, 2018 Puma ByDesign Culture Comments Off on The Time I Took my Wife to Meet the Girls at Manos

Veterans’ Tales by Vassar Bushmills You already know the story of my first visit to Manos, the Russian spy-restaurant in Tokyo. It was 1972. It was run by two brothers from Pittsburgh, former OSS officers during WWII, and within shouting distance of the Soviet embassy, where, at the end of every visit, I’d [Read More]

Kataomoi – My Unrequited Love for Japan and the Japanese Part 3

March 18, 2017 1willford World Comments Off on Kataomoi – My Unrequited Love for Japan and the Japanese Part 3

Series links: Part 1, Part 2, Part 4, Part 5Part 6 This month marks the 20th anniversary of my return to the United States after 5 years spent living abroad, mostly in Kyoto Japan. To mark this anniversary and to explore what I learned from my experience I will be [Read More]

Trump’s decision to change the paradigm with North Korea illustrates the precept in my annual Passover post: Tyrannies must be decapitated, not placated. Starting with Bill Clinton, America fawned over North Korea’s tyrannical rulers, sending them money and promising not to hurt them. In those same years, North Korea’s rulers [Read More]