Senator John McCain of Arizona was recently taken ill with a fairly serious form of brain cancer, glioblastoma. There’s only a ten percent chance of surviving more than a few years. Ordinarily, as much as I disagree with his politics and dislike his record in office, my normal policy would be to simply wish him luck on his recovery and leave it at that. Those sentiments still apply, but really, John McCain should learn to keep his mouth shut. For his own good.

Senator McCain has always been a sucker for press attention and apparently the 80-year-old wasn’t too ill to cooperate with the drive by media by hitting out at President Trump. It’s particularly pernicious since he was personally involved in the matter at hand, albeit in a ludicrous way.

Today, President Trump formally ended a CIA program started by President Barack Hussein Obama in 2013. It was a covert operation that by passed Congress to arm, train and support supposed moderate Syrian rebels in what was then called the Free Syrian Army against Syrian dictator Basher Assad.

John McCain went nuts over this. After calling out the president in terms the usual suspects in the media just ate up, McCain said “If these reports are true, the administration is playing right into the hands of Vladimir Putin.”

He also claimed that President Trump ‘has no strategy in Syria.’

That ‘right into the hands’ bit is particularly funny coming from McCain, but first a little background.

The Free Syrian Army were never ‘moderate.’ The movement was filled with Salafists, Islamists and jihadis of the most radical persuasion. One of the main components was al-Qaeda affiliate Al-Nusrah, an officially designated terrorist group. Other elements were part of the the Muslim Brotherhood.

The CIA operation also involved collusion with Qatar and President Obama’s BFF, Turkey’s Tayyip Erdoğan. There was  a documentary made by PBS ( hardly a right wing, anti-Obama platform) entitled ” Syria: Arming the Rebels” that actually showed jihadis training, holding up U.S. weapons and supplies and describe their journey from the Syrian battlefield to meet with their American handlers in Turkey and then being shipped to Qatar. Once there, they’re instructed in sophisticated combat techniques, including one course on “how to finish off soldiers still alive after an ambush.”

As PBS noted “it appears the Obama administration is allowing select groups of rebels to receive US-made anti-tank missiles.”

Those ‘select groups’ became ISIS, and the Obama Administration spent $287 million equipping and training them before congress found out, after which Obama’s Secretary of State John Kerry asked Congress for an additional half a billion dollars to essentially fund what became ISIS. Now you know how ISIS got so strong so fast. You see, ISIS started in Syria, not Iraq, with the Free Syrian Army.Their attack on Iraq and the influx of Iraqi former Sunni military joining ISIS came later.

One of the Senators trying to push increased funding for them was none other than John McCain. In one unintentionally hilarious episode McCain met with some of the leaders of those ‘moderate rebels.’ Let’s see, left to right we have Abu Mosa, al-Qaeda operative and later ISIS press officer; Peeking over Mosa’s shoulder in ISIS Calipha Abu Baker al-Baghdadi; McCain; ‘General’ Salim Idris, who headed up a small window dressing organization called the Syrian Military Council that had nothing to do with the Free Syrian Army or any real military action;  Mohammed Noor, a member of al-Nusrah and ISIS officer who kidnapped three hostages who were later beheaded in ISIS videos,;and Malik Massouwi, another al-Nusrah member and ISIS commander. So yes, the Obama Administration helped create and fund ISIS.

McCain went to Turkey and slipped just over the border to the Syrian border town of Bab-al-Salam to press the flesh with his pals.

Later on, having built up one terrorist army and seen it go out of control and become ISIS, President Obama found another group of ‘moderates’ to support along with Qatar and Turkey, Jaish-al-Fatah, the Army of Conquest. 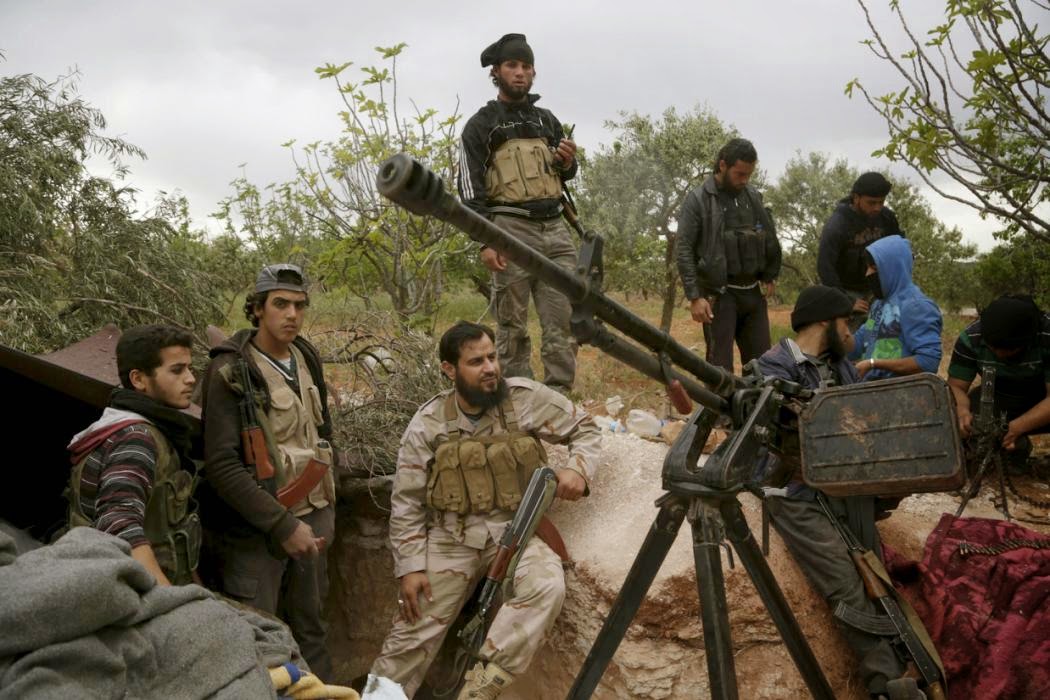 So, who are these guys in Jaish-al-Fatah, the new moderates in Syria? Why, the two main components are Ahrar ash-Sham, an officially designated terrorist group and our old friends the al-Qaeda offshoot al-Nusrah, of course. These are the guys Obama (and yes, Senator McCain) screamed bloody murder about Putin targeting with air strikes.

Considering that they were hunkered down right next to Lebanon’s border in  large chunks of Idlib province including the provincial capitol, Putin targeting them certainly made sense strategically.

Trump finally pulling the plug on these jihadis also certainly made sense. And you can’t call it aiding and abetting terrorism, a federal crime some other people I could mention could plausibly be charged with.

One group of real moderates Trump has been backing lately with great success is the Kurds. Under Obama’s reign, the Kurds got just enough support to keep them going, but President Trump has increased support for the Kurds and their heroic Persh Mergah quite a bit. And as WAPO columnist David Ignatius had to sorrowfully admit, the Kurds cheer wildly whenever our president’s name is mentioned. They know they finally have a real friend in the White House. And Ignatius also had a few things to say about our president’s decisiveness. So much for Senator McCain’s nonsense about ‘no ISIS strategy:

So Senator John McCain, for obvious reasons ought to learn for once to keep his mouth shut.

I wish him a full recovery and a nice retirement from public life. Maybe there’s a savings and loan he can do commercials for on TV, just so he could enjoy a nice buzz from being on camera. in Spanish. I’m certain he could work out something with Univision, his chief donor.

On behalf of Bookworm, I’m reposting her account of an NRO Cruise she’s embarked on . Enjoy!   November  18, 2016 That title is correct: I’ll give you a brief rundown of Dinesh D’Souza’s Hillary’s America, an abortion panel, and a military panel. Things happen quickly on a National Review [Read More]

Watch the latest video at foxnews.com   Mar. 04, 2018 – 14:36 – Did the Obama administration use the FISA court to spy on the Trump campaign? Chairman of the House Intelligence Committee opens up about the investigation on ‘Life, Liberty & Levin.’