President Trump pardoned Arizona Sheriff Joe Arpaio, the Arizona lawman facing six months imprisonment and a fine. Sheriff Arpaio’s ‘crime’ was apparently not complying with a court order by U. S. District Judge Susan Bolton, a Clinton appointee also responsible for blocking much of Arizona’s  SB1070 from being enacted in 2010.You’ll remember that SB1070 essentially mandated that  police were allowed  to determine the immigration status of someone arrested or detained when there is “reasonable suspicion” they were not in the U.S. legally.

The Supreme Court later upheld the main provision on the law, which simply matches U.S. immigration law allowing in law enforcement to request identification and papers verifying someone’s legal status to be in America when they are detained or arrested.

But various lawfare suits and injunctions as well as the Obama Administration’s continued battling SB1070 and similar laws in court led to delays in enforcement.

What was at issue were contempt charges for  allegedly ‘profiling’ Latinos  regarding their immigration status after Sheriff Arpaio was ordered to essentially ignore the law. This was a witch-hunt set up by the Obama administration after a number of attempts to charge Sheriff Joe Arpaio in the past were unsuccessful.

Another factor was Sheriff Arpaio’s request for a jury trial, which was denied by Judge Bolton, a violation of due process. What we had here was yet another case of the  Obama administration attempting to use a friendly, partisan judge to punish a political opponent for simply enforcing the law.

As always, former President Barack Hussein Obama and his justice department obeyed the laws they felt like obeying and broke the ones they didn’t with impunity.

President Trump, to his credit overturned a major miscarriage of justice by giving Sheriff Arpaio a full pardon.

Needless to say, the Left and their allies condemned this out of hand in particularly crazy fashion.

The always amusing Maxine Waters showed once again why she’s the mayor of CrazyTown:

ABC did an entire panel on why Trump pardoning Sheriff Arpaio is a sign of mental illness.

“No one is above the law and the individuals entrusted with the privilege of being sworn law officers should always seek to be beyond reproach in their commitment to fairly enforcing the laws they swore to uphold. Mr. Arpaio was found guilty of criminal contempt for continuing to illegally profile Latinos living in Arizona based on their perceived immigration status in violation of a judge’s orders. The President has the authority to make this pardon, but doing so at this time undermines his claim for the respect of rule of law as Mr. Arpaio has shown no remorse for his actions.”

Actually, Sheriff Arpaio was never ‘found guilty’ of anything. A partisan judge decided the she felt he was in contempt and sentenced him. There was no jury and thus no legal trial.

But speaking of respecting the law, answer me this; have Senators McCain, Flake and Rep-. Ryan ever respected our laws on immigration? Or have they constantly fought against those laws and advocated open borders and amnesty? I think we know the answers to that one.

Not only that, but think back to the actual felons and career criminals pardoned by President Clinton and President Obama. In Obama’s case, that included FALN terrorist Oscar Lopez Rivera.. And in effect giving pardons fro material aid to terrorism, a felony, to the heads of CAIR and other Muslim Brotherhood leaders by having his Justice Department file motions of disinclination to prosecute.

Tell me, do you remember John McCain or Paul Ryan talking then about respect for the rule of law? When President Obama illegally altered ObamaCare, something only congress has the authority to do, did they squawk at all? Of course not.

In the case of McCain and Ryan, aside from press attention their motivation is obvious. McCain’s chief financial backer is UniVision, the Spanish Language network. in Ryan’s case, the dairy farmers and other businesses in his district absolutely love the continuing flow of chief labor and donate accordingly to him. And Flake likely has his own motivations.

Fortunately, Jeff Flake’s seat comes up for grabs next year, and Dr. Kelli Ward is running against Sen. Flake for the U. S. Senate seat he currently holds. Dr. Ward released the following statement in response to the presidential pardon of Sheriff Joe, and it is a vastly different message from what has been expressed by Flake and McCain:

“We applaud the President for exercising his pardon authority to counter the assault on Sheriff Arpaio’s heroic efforts to enforce the nation’s immigration laws.”

She’s well known in Arizona, having served two terms in the Senate and already has support from top line talk radio personalities like Sean Hannity, Mark Levin and Laura Ingraham as well as a supporting tweet from President Trump, who is enormously popular in the grand Canyon State. 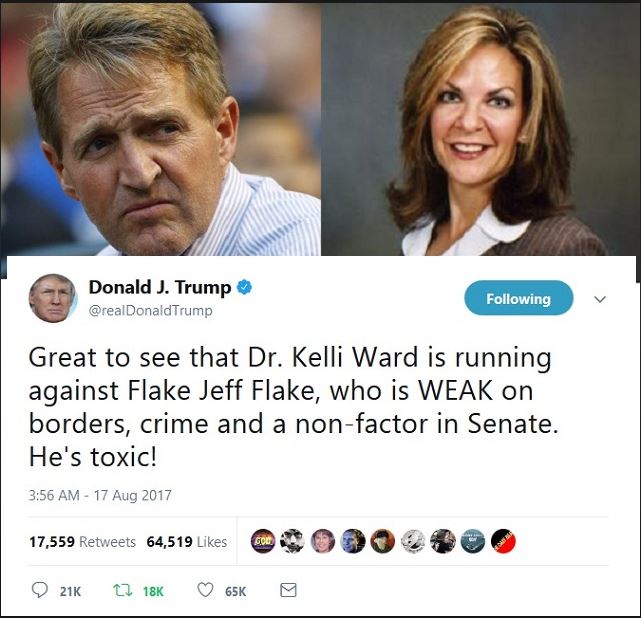 Mollie Tibbets was a 20-year old Iowa student with a loving family and her whole life ahead of her. She went out jogging on July 18  around a neighborhood in her home town, Brooklyn, Iowa a small community of 1,500. Then she had  the misfortune to run into an illegal migrant, [Read More]

A video about hate and love in Trump’s America

March 21, 2019 Bookworm Politics Comments Off on A video about hate and love in Trump’s America

The news feels stale — I’ve blogged about it all before — but a new video makes a powerful statement about love and hate in Trump’s America. I’ve been struggling a bit today trying to pick a topic for blogging. I could say that watching the Democrat candidates is like [Read More]