Le Jihad Français continues, as yet another terror attack makes the headlines. A father and son were found in outside a building on Rue de Montreuil in the east side of Paris  near Place de la Nation with their throats slit.

A resident living in a  high-rise  in the city’s 11th district said he heard a man “crying for help” at around 11am, which tallies with the other evidence that has been released so far.

“I looked out the window and saw a man lying on the ground. There was a lot of blood.

“There was another man standing beside him, dressed in a white djellaba (loose-fitting tunic worn by some Muslims).

“When I arrived in the hall of the building I saw a body lying in a pool of blood, in front of the postboxes. It was carnage. I went out and then saw another person covered in blood.” he said.

Actually, to the majority if the French, that’s exactly what it’s becoming.

An IFOP-FIDUCIAL poll found that that 93 per cent of the French believe there is a significant threat of terrorist attacks, and 71 per cent agree the security situation in France has gotten worse over the last five years.

Even more revealing, 59 per cent of those polled said they did not feel safe anywhere, with almost one in four (24 per cent) opting to “strongly agree” with the statement. And a whopping 88 per cent believe France should deport foreigners found guilty of serious offenses, while a majority (55 per cent) want France to pull out of the EU’s open borders Schengen zone.

Le Jihad Français…well, France has been under a national state of emergency since the terrorist attacks of 2015. Armed soldiers patrol the streets, giving Paris and other cities the appearance of an armed camp, which is appropriate for a nation under siege. French PM Hollande, the Socialist they stupidly elected has done nothing. That isn’t surprising since a bloc Muslim vote was significantly responsible for electing him. The French can either decide to accept the status quo or to break the siege. Their country is literally at stake. 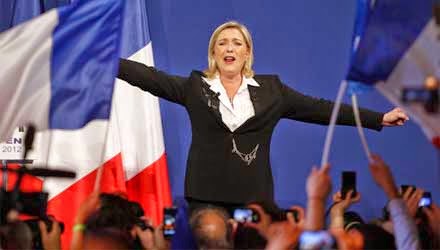 This year, the French have the opportunity to make that choice. They have an election this year, and they can chose either to break the siege and end Le Jihad Français which means voting for The National Front and Marine Le Pen, the only candidate running who can redeem and save France. Or they can surrender and give up France to the invaders, with all that implies.

The decision is theirs.

The Swedish government is looking for a way to convince ISIS jihadists returning home to turn over a new leaf [my emphasis]. Really. Sweden, like their European neighbors opened their borders to the ideologically demented whose objective is to slaughter the infidel and smear their blood throughout the streets of [Read More]