Another fine Friday has come upon us and we have another fine set of articles targeting the biggest weasels of the world.

Non-Council winner Seraphic Secret provides an analysis of the current war against Israel and notes that there is little difference between modern day anti-Zionism and old fashioned Jew hared.

There is no question in my mind that so-called anti-Zionism serves as a fig-leaf for Jew hatred.

There is no other explanation.

I’ve never heard of any other country’s legitimacy relentlessly questioned and undermined. You would think that those who espouse the love of human rights and rejection of violence and government oppression would attack, with proper fury, countries like Congo, Sudan, Jordan, Somalia, The Taliban in Afghanistan, Sri Lanka, Pakistan, Cuba, Libya, Dubai, Gazastan, Iran, Syria, Saudi Arabia, Yemen, Venezuela, and of course the most repressive country on planet earth, North Korea. But Israel is the target of choice, and a fetish is made of the so-called Palestinians—before World War II the Palestinians were understood to be the Jewish residents of modern day Israel, whereas the Arabs were called, uh, Arabs or Syrians.

Robert J. Avrech continues the article by noting that the American left and much of the Western world that hides behind the new phrase of “anti-Zionism” has it’s views rooted in academia.

Of course, delegitimizing the authors I quote is much easier than refuting their arguments. It’s the same tactic used when talking about Israel, exaggerating her sins in order to delegitimize the entire Jewish state and by inference Judaism.

I’m always amused by the trust in the judgment and morality of academics.

Some—by no means all—of the most stupid people I know are respected academics; they have less common sense than an amoeba.

As far as ethics and values are concerned, if you want your children to unlearn all the values and religion you have spent a lifetime instilling in them, send them to a liberal arts college for four years and watch their brains turn to liberal jelly under the unrelenting assault of charismatic radical professors. You think American terrorist Bill Ayers is unusual in academic circles?

Ayers is the norm.

I spent four years in a liberal arts college and I can’t even count the number of my professors who were proud and vocal Marxists.

Apply the principles urged on Israel to the United States, and you end up with a scenario something like this: 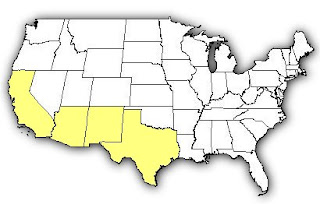 The new final settlement conference between the US, Mexico, and the Aztlánistas is scheduled for late June. The agreement promises a new chapter in the relationship between the countries — and new hope for Aztlánista refugees yearning for self-determination and a state of their own.

For years, there has been ongoing hostilities, massive illegal immigration and ongoing terrorism on the border. While there are many troublesome issues, new attitudes on both sides of the conflict may mean that peace is finally within reach.

The new status quo will probably look very much like the plan made by New Aztlán advocates like MEChA (and prominent American academics), tempered with the peace plan promoted by Mexican President Calderon. Other Latin American countries have endorsed the plan.

What the Aztlánistas want is final status on a state of their own with contiguous borders, New Aztlán, to consist of the American territories of California, Texas, New Mexico and Arizona. The capital of the new regime will, of course, be traditionally Aztlánista Los Angeles.

The problems of a final solution to this problem should not be underestimated. Right wing ultra-nationalist settlers who consider these territories part of their historic homeland, regardless of international law, populate much of the area in question. Resettling them in the United States within the pre-conflict borders will entail considerable trouble and expense for the US.

This would pose an interesting problem for sure, and is one that is rarely considered except by rational people. Therein lies the problem as Rob lays out in fine form.

Read all of the great articles in this week’s contest. As always keep an eye out for weasels in you midst, tell your friends and help eradicate the shortcomings of those with less common sense than an amoeba.