60-year-old Bernell Trammell owned a small store in Milwaukee. He was kind man, well liked in his neighborhood, a religious man who did some street preaching. He was also a Trump supporter. That got him murdered. 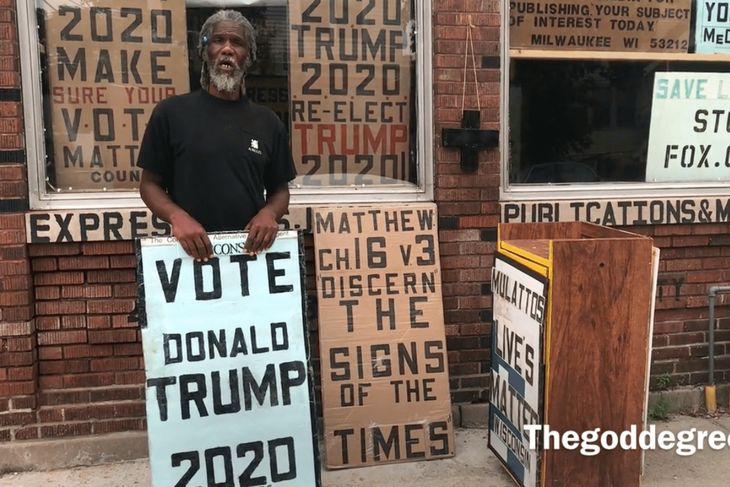 This is a man who worshiped G-d and a man of faith. You can hear it in his voice. In a video shot near his store, Bernell Trammell said the following:

“I am Bernell Trammell, I am at my office at the Expressions Journal publication, and I am encouraging afro-Americans from all walks of life and culture here in Wisconsin, particularly here in Milwaukee, to vote Donald Trump for this year, Trump 2020.” This was just a few hours before he was murdered. He also made a Facebook post showing him carrying the same ‘vote for Donald Trump sign.’

Here’s what one of his neighbors posted onTwitter about him. ” Bernell Trammell was shot in the head execution style broad daylight yesterday in front of his store. He was a God fearing Trump supporting man. Was it because he was a Trump supporter? He didn’t look for fights, he lived a good life. Sick and sad! “

Wisconsin Senator RonJohnson also had something to say about this:

Bernell Trammell was known to many in Milwaukee. My condolences to his family and friends. I hope they get answers and justice soon.

Will they? Perhaps. But since no one else had any reason to kill Bernall Trammel, he was obviously murdered because of his political beliefs. They simply decided he was one Black life that didn’t matter and since he was well known and respected in his part of Milwaukee and might influence people, they killed him.

We live in an age when expressing your views freely, the basis of our First Amendment only applies to the Radical Left. Even in our neighborhoods, people realize that supporting President Trump with a bumper sticker or a lawn sign can get your car or home vandalized. Even worse is the way sports teams, colleges, certain city and state governments, many corporations, Hollywood and most of our media cowardly adhere to this Orwellian punishment for thought crimes.

Not only can it get your property vandalized or get you socially ostracized, it can get you fired from your job for the least infraction. It can even get you seriously injured or killed, and Bernell Trammell is not the first victim.

This needs to be stopped, or it will destroy our country and melt away our freedoms.

On Bernall Trammel’s sign in front of his store, one of the signs mentions Matthew 16, verse 3 and urges us to discern the signs of the times:

And the Pharisees and Sadducees came, and to test him they asked him to show them a sign from heaven. He answered them, “When it is evening, you say, ‘It will be fair weather, for the sky is red.’

And in the morning, ‘It will be stormy today, for the sky is red and threatening.’ You know how to interpret the appearance of the sky, but you cannot interpret the signs of the times.

Very appropriate. We had better start learning to interpret the signs of the times….and start taking action accordingly.

Rob Miller writes for Joshuapundit. His articles have appeared in The Jerusalem Post, The Washington Examiner, American Thinker, The Los Angeles Times, The Atlanta Journal-Constitution, The San Francisco Chronicle, Real Clear Politics, The Times Of Israel, Breitbart.Com, Yediot and other publications. Follow him at Joshuapundit