Mistress if E-Mails, Serial Liar, Benghazi Babe And A Law Unto Herself Hillary Clinton!!

On June 20, 2007, Hillary Clinton whined and bloviated shrilly about Bush officials shredding the US Constitution by having secret email accounts. Not even two years later, as Secretary of State, Clinton set up a secret email account and secret servers in her basement for all of her official business to skirt federal law. The computer server that transmitted and received Hillary Rodham Clinton’s emails traced back to an Internet service registered to her family’s home in Chappaqua, New York.

The Washington Post points out that this would give Clinton: (1) âimpressive control over
limiting access to her message archives and (2) secretive email practices far more sophisticated than some politicians. Hillary is keeping mum on all of this and her silence is damning.

Hillary is a crafty weasel, she figures since she asked the State Department to release the 55,000 pages of emails she provided to the agency, that everything will quiet down. In fact, that is now her team’s strategy, to do nothing. It is a time-tested Clintonian approach: take a concrete step to ease the pressure, then sit back and wait it out.

You watch, she’ll pooh pooh this as a non-issue. That it is irrelevant – you know, like breaking the law always is for the Clintons. Unfortunately, for Hillary, this has legs and isn’t going away and won’t just fade off the radar either. Rumor has it, those email accounts that she has so carefully hid and labeled with pseudonyms, have been hacked. Huma Abedin is caught up in this as well. Those emails should finish the Hildebeast off if there is any justice in the universe. She is an accomplished weasel.

The Right Planet : Once again, when it comes to the Clintons, we see a classic example of the old “the rules don’t apply to me” schtick. Hillary Clinton not only refused to use an official government email address for her official communications when she was serving as Secretary of State, she went as far as to set up a private email server in her own home in an obvious effort to retain complete control over her all official communications. Why? What is she trying to hide? This seems to be a pattern with this administration (see former EPA head Lisa Jackson and her “Richard Windsor” email account).

I really can’t put it any better than “Zip” over at Weasel Zippers:

“So let’s review. [Hillary Clinton] violated the rules of her Department, violated the Federal Records Act, required employees to follow the rules and kicked one out for not following them, failed to respond to prior requests for the emails, and then when she finally turned over some, there were huge gaps of months missing. Now we don’t even know where the server she exposed all kinds of info on is, and how exposed it was to attack. Let’s elect this woman President, yay!” 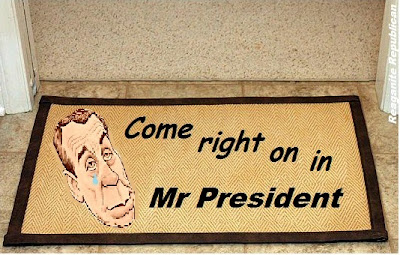 Virginia Right! :Although John Boehner is a frequent flyer on the Weasel of the Week program, I feel he is deserving of the dubious honor again. He cast aside the Hastert Rule that would only allow a bill to come to the floor if a majority of Republicans were in favor of it.

Boehner, however, ignored this common sense rule and formed what can only be called a Coalition Government by taking the Liberal wing of the Republican Party with him over to the Democrats to force Obama’s illegal amnesty program to be fully funded.

And then came news that Obama has already allowed over 100,000 illegals into his amnesty program before the start date.

So I again nominate John Boehner.

The Independent Sentinel : Extremely, very far left mayor of New York City Bill de Blasio has his minions in cultural organizations, such as museums, orchestras and dance troupes, looking to inflict affirmative action when hiring staffs. It’s not legal but the administration won’t let Supreme Court decisions get in the way.

These people are into equity not equality, social justice, not justice, and there is nothing fair about all of this.

Cultural Affairs commissioner, Tom Finkelpearl gets my nomination as weasel for being a toady who thinks we should hire employees by race instead of talent, experience, ability.

“If you’re living in a city like we are in New York — with 65 percent people of color right now — maybe we’re missing out on some of the talent if we don’t have diverse audiences, staffs and boards,” said Tom Finkelpearl, the city’s commissioner of cultural affairs, whose department will commission the study.

Finkelpearl said, “…diversity should be a priority for institutions when it comes to naming trustees or hiring employees.”

“Over 90 percent of staffs at museums nationally are white,” Mr. Finkelpearl said.

[Hello, he’s white. He needs to fire himself.]

[And what’s the percentage of minority NFL players?]

“The arts cannot be the exclusive purview and playground of the privileged,” said the president of the Ford Foundation.

[The privileged are the white of course, not the elites who run the Ford Foundation or the white guy in Gracie Mansion.]

“Everything we do in the organization now is seen through the lens of equity,” said Anne Pasternak, the president and artistic director of Creative Time.

Nice Deb : David Brock earned my nomination for Weasel of the Week based on his hair alone.

But there’s so much more to this Media Matters Maven than his hair. One expects someone this in the tank for Hillary to come out and defend her indefensible email practices in media venues like Morning Joe, (beclowning himself in the process.)

But David Brock went above and beyond the call of duty.

Host Joe Scarborough then read Brock a 2009 federal regulation that requires all federal employees to preserve emails “in the appropriate record keeping system.” This is something Clinton did not do until recently, at least until two years after leaving the State Department. Brock appeared to argue that in doing so she did in fact comply. Of course, Brock has no way of knowing that. Because she skirted the law for 6 years, and apparently used her own email server, there is no way to know if she turned over every email.

This appears to violate both the letter and spirit of the law that requires “a system not operated by the agency MUST ensure that “emails outside of the federal system are preserved.” [emphasis mine]
Unbound by facts, Brock added this to his bizarre defense, “The State Department said yesterday that the emails were regularly preserved.” Brock is arguing here that the emails were preserved by … Ms. Clinton.

When reminded that the law requires that the emails be “preserved in the appropriate agency” and not by the individual’s home-brewed server, Brock didn’t appear to grasp what that meant. “It’s not clear that didn’t happen, Joe,” Brock replied. “The New York Times doesn’t establish that at all. In fact, the 2009 law you’re referring to isn’t even cited in the New York Times.”

A favorite Media Matters ploy is to find one tiny flaw – one perceived weakness in an inconvenient narrative and exploit the heck out of it, betting (usually correctly) that the MSM will be happy to latch onto any excuse to stop reporting the story. Brock gave it his best shot on Morning Joe, but alas, fell on his face. Sad but true – not to mention weaselly.