The Noisy Room : My nomination this week is for Uncle Joe Biden.

Iran would have enough enriched uranium within three months to be
able to make up to eight nuclear weapons if negotiations with the
international community blow up, Vice President Joe Biden said late Thursday, noting that “the path has already been paved” for that
outcome.

Biden’s remarks at a dinner for the Washington Institute for Near
East Policy played off concerns by critics, including Israeli Prime
Minister Benjamin Netanyahu, that the Obama administration is
negotiating an agreement that paves the path for Iran to get a
nuclear weapon.

“Let’s get something straight so we don’t kid each other,” Biden
said. “They already have paved a path to a bomb’s worth of material.
Iran could get there now if they walked away in two to three months
without a deal.”

While saying the obvious and yet not admitting that they will have the
bomb even /with/ the deal and just as fast, he then countered by
claiming that Obama would not allow Iran to get the bomb. As if inking
the agreement will just magically make the nukes disappear. According to
Biden’s mushy logic, Iran is going to get the bomb if that agreement is
not signed in blood. The nuclear cake is baked. For being a general
dunderhead who can’t get even the smallest fact straight without
mouthing the opposite or at the very least something monumentally
stupid, Biden should get the golden weasel. It goes with his hair plugs. 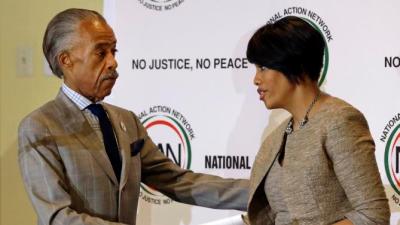 Secretary Of The DNC And Mayor Of Baltimore Stephanie ‘Let ‘Em Loot’ Rawlings-Blake!

“I made it very clear that I work with the police and instructed them to do everything that they could to make sure that the protesters were able to exercise their right to free speech. It’s a very delicate balancing act. Because while we try to make sure that they were protected from the cars and other things that were going on, we also gave those who wished to destroy space to do that as well. And we worked very hard to keep that balance and to put ourselves in the best position to de-escalate.”
By de-escalate, she meant escalate. This policy earned her the Weasel of the Week award.
Having been caught inciting and encouraging riots, she told “Meet the Press”:
Chuck Todd: “Do you regret using the phrase ‘space to destroy’?”
Mayor Weasel: “You know, I certainly think that it was taken out of context. Let me say this: I’m from Baltimore, my parents are from here, I’m raising my daughter here. I’m a public defender. As city council person, as mayor, I’ve always worked to strengthen my city. We fought to get those stores in our community. I would never condone rioting. Just period. I would never condone it.”
Todd: “So wish you didn’t use that phrase?”
Mayor Weasel: “I certainly used the wrong phrase to talk about what was clear that there were people who took advantage of the peaceful demonstrator’s First Amendment right, and they used it to destroy our city. And I don’t condone it, and we’ll make sure that those individuals will be held accountable.”
Baloney. Most (likely all) looters will get away with it. She encouraged looting. She wants to drive free enterprise out of Baltimore so that socialistic policies expand. Still a weasel.
And Chuck Todd would never allow a conservative to weasel like that.

Jew Hater, Plagiarist, Terrorist Groupie And Utterly Failed Former President Jimmy Carter!
JoshuaPundit : You know, I will actually miss Cwazy Unkie Jimmah just a little bit when he slithers off this mortal coil.  This Saudi-bought pimp weasel really is in a class by himself, and he continues to be the gift that keeps on giving.

Jimmah’s latest exploit involves support for terrorism, something he’s certainly done before.  He went  to Israel and asked for the Israelis to allow him to travel to Hamasistan, AKA Gaza. They were fine with it, but when this senile waterhead demanded meetings with Israeli PM Netanyahu and President Reuven Rivlin they both turned him down flat. That’s hardly surprising, considering Unkie Jimmah’s record of relentless anti-Israel activity and support for terrorism directed against Jews.

But Unkie Jimmah went ballistic, throwing a tantrum and claiming he never wanted to meet with them anyway, particularly Netanyahu because ‘it would be a waste of time.’

Then he ambled over to the territory occupied  by Palestine’s unelected dictator Mahmoud Abbas for a photo – op and interview in Ramallah. Among other gems, he extolled the virtues of his old pal Khalid Mesha’al, the leader of the admittedly genocidal Hamas, calling him”a man of peace.”  Unkie Jimmah has never figured out why Europe, The U.S. and even Egypt have labeled Hamas a terrorist group for years.

He then called for new elections “ all over the Palestinian area and east Jerusalem and Gaza and also in the West Bank.”  That probably didn’t endear him to Abbas, who’s in year 10 of a four year term but his statements were directed more towards Europe (where’s there’s a push on to legitimize Hamas) and the anti-Israel media.

After shooting his mouth off, he then cancelled his trip to Gaza citing ‘security concerns’ believe it or not. Perhaps Hamas aren’t so peaceful after all?

This isn’t the first time Carter has tried to intervened directly  to help to help terrorists. While he was president, he was a particularly rabid fan of Yassir Arafat even though he knew he murdered Americans and had two of our diplomats kidnapped and tortured to death.

And as far as Khalid Mesha’al goes, this isn’t the first time  Jimmah has tried to give him a helping hand. Among his other antics, our ex-president met with Mesha’al to advise him on how much ransom to ask for kidnapped Israel soldier Gilad Shalit, believe it or not.

Like I said, the gift that keeps on giving. Jimmy Carter’a end destination is Obviously Dante’s lowest circle of Hell, the abode of utterly failed politicians. But until then, he’ll continue to soil himself in public.