Once again, It’s time to present this week’s statuette of shame, The Golden Weasel!!

Every Tuesday, the Council nominates some of the slimiest, most despicable characters in public life for some deed of evil, cowardice or corruption they’ve performed. Then we vote to single out one particular Weasel for special mention, to whom we award the statuette of shame, our special, 100% plastic Golden Weasel. This week’s nominees were all slime-worthy,but in the end the winner was..the envelope please…

The Independent Sentinel :    Nancy Pelosi was so very weasley this past week.

“I do not believe what happened the other night is a wave,” Pelosi said about the election, she described it as “an ebb tide.”

She can say any dumb thing she wants because the imbeciles who vote for her will continue to vote for her no matter what she says.

She went into a crazed rant about sexism and ageism last week because CBS news reporter Nancy Cordes asked her if she gave any thought to stepping down as the leader.

After she was asked the question, Nancy said, “What was the day,” she replied to Cordes, “when any of you said to Mitch McConnell when they lost the Senate three times in a row . . . ‘Aren’t you getting a little old, Mitch? Shouldn’t you step aside?’ ”

Best yet was her big lie about Jonathan Gruber.

She said she didn’t know him but there is video of her referencing him in 2009.

Ah, good ol’ Nancy. For an elderly politico confused about who won the 2014 midterms, she still manages to shock, offend, bamboozle and mislead with the best of ’em.

And her memory tricks! Remember when she swore she’d never been briefed on enhanced interrogation techniques and it turns out she was – in depth? 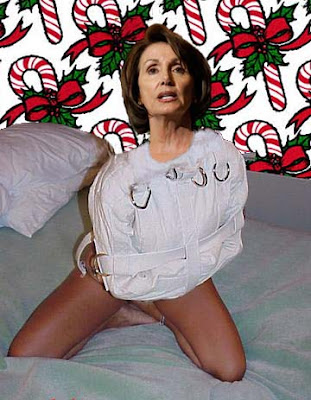 Congresswoman Pelosi has whole bunch of stories we could tell..her burying a swipe fees bill for VISA and her and her husband getting access to a special IPO as a reward that even a lot of stockbrokers didn’t have access to, her conduct that would have been out and out treason during the Iraq War if congress had declared it, her non-union winery..and who can  forget her telling America that we had to pass Obama Care to find out what was in it! Even her recent shenanigans in denying a Democrat congresswoman who’s unable to go to DC because she lost both legs in  Iraq and is heavily pregnant a  vote on committee assignments is weaselly beyond weaselly…. So think of this Weasel as more of a tribute to your long career rather than for just one bit of  prevarication! Enjoy, Leader Pelosi..it’s all yours!