As I predicted when this all started, Trump’s biggest problem isn’t going to be the Democrats, but friendly fire from the rear…from Republicans and their minions who have a stake in the established order of things.

For years, the party elites had wailed about the party’s need to make the tent bigger, to reach out to minority voters and conservative crossover Democrats. Trump has done all that, but as usual, it turns out they was lying to us. What they really wanted was some certified GOP product, one of their own who could creditably mislead the peasants until the election was over and it was business as usual again.

Trump was something they should have foreseen would arise after they received historic majorities in both houses of congress and ignored the very people who voted for them.They chose instead to aid and abet Barack Obama’s policies, enjoying the perks of office and fattening their own wallets, 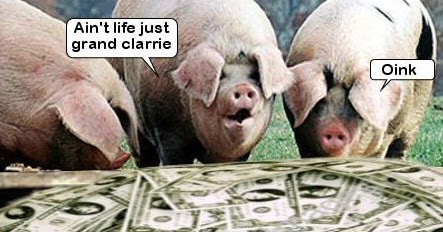 Originally, they saw Trump’s campaign as a joke or a publicity stunt, something to mock. But after Sarah Palin (whom they can’t buy off and still fear) endorsed The Donald, they went into full attack mode flooded the GOP establishment candidates with money and unleashed their paid punditry in a frenzy of neverTrumper hatred.

It didn’t work, and they’re still too cottoned off from reality to understand why. In the end they spent almost half a billion dollars trying to knock Trump out of the primary race and failed miserably.

The hatred they have for Trump and what he represents is mirrored by their hatred for those tiresome peasants, the party’s base. Trump’s success against all odds has made it necessary for them to drop their cover and reveal themselves for the swine they really are.