“One must remember that the Jews have one, tiny country, the only place they have the right and capability to defend themselves by themselves. And it is our duty and my responsibility to see that we will never compromise about that. – Ariel Sharon (Z”L)

“One fulfills his national duty voluntarily, as best as one can.” – PLO Spokesman and Executive Committee member Mahmoud Ismail on official PA TV, using the term ‘a national duty’ to describe the murder of Eitam and Naama Henkin (HY”D) in front of four of their children.

“” When we are in a position where – through no fault of our own – physical force dominates, only one question can be asked: what is worse? To continue watching Jews being killed and the conviction grows that our lives our cheap, and among the whole world that we are spineless?…the blackest of all characteristics is the tradition of the cheapness of Jewish blood, on the shedding of which there is no prohibition and for which you do not pay.” – Ze’ev Jabotinsky

This week’s winning essay,Joshuapundit’sTwo Speeches And Some Funerals. It is my reaction to recent events in Israel and in Jerusalem, and yes, their ultimate effect on America. Here’s a slice:

Anyone remotely following the news from Israel knows that some serious violence has broken out there. As usual, the media bends over backwards to paint this as a ‘cycle of violence’ for which both sides are responsible. This is an outrageous, Newspeak lie, and as I’ll show you, it has some serious implications for America,believe it or not.

Mahmoud Abbas and the Palestinian Authority have long practiced a double game perfected by Abbas’s old chief, Yasser Arafat. The idea is to mouth platitudes in English while funding and encouraging genocide against Jews in Arabic in the PLO’s schools, mosques and media. And the current explosion of violence against Israel’s Jews is directly linked to this tactic.

Abbas’s recent speeches have literally involved marching orders to the Arabs whom call themselves Palestinians to violently attack Jews, primarily but not limited to Jerusalem.

Abbas was preparing the ground as long ago as September 17, just prior to the Jewish High Holy Days, saying: “Every drop of blood that has been spilled in Jerusalem is holy blood as long as it was for Allah. Every Martyr (Shahid) will reach Paradise, and everyone wounded will be rewarded, Allah willing.’ … We will not allow them to carry out their actions and divide the Al-Aqsa [Mosque], and stated: ‘The Al-Aqsa [Mosque] is ours, and they have no right to defile it with their filthy feet. We will not allow them to, and we will do everything in our power to protect Jerusalem.”

At the same time, the signals to attack Jews were amplified in th3e mosques, schools and media of ‘Palestine’ as they always are.

The Muslim Waqf which controls the al-Aksa mosque allowed the stockpiling of rocks, firebombs and iron bars on the mosque specifically to attack Jews worshiping at the Kotel(the Western Wall) below.

They deliberately sought to provoke a reaction from Israeli security forces.

In case you think mere rocks are no problem, I invite you to read this woman’s account of being assaulted by the brave ‘Palestinian’ warriors.

Other attacks were planned and carried out against Israelis without warning, with cars being particularly vulnerable because of their orange Israeli license plates.

One of the first to die was Alexander Levlovitz, who was murdered when his car was attacked in the neighborhood of Har Homa. His wife and baby were injured by shards of broken glass.

One Israeli woman was actually pulled from her car after it was stoned and was only saved from assault and worse by Israeli passerbys who fired on the crowd.

Mahmoud Abbas’s recent speech in the UN has to be seen in the context of the terrorist attacks he and Fatah were and are encouraging.

In it, he talked of ‘a year of a new war of genocide perpetrated against the Palestinian people’ and ‘the historic injustice inflicted on the Palestinian people in Al-Nakba of 1948, the occupying Power has chosen to defy the entire world by launching its war on Gaza, by which its jets and tanks brutally assassinated lives and devastated the homes, schools and dreams of thousands of Palestinian children, women and men and in reality destroying the remaining hopes for peace.’

Actually, it’s the other way around. The real attempted genocide is being launched by the Arabs whom call themselves Palestinians against Israel’s Jews.

Abbas also said that the Palestinian Authority was no longer bound by Oslo or any other agreements it has signed with Israel. That was really no big news since they have never abided by the terms of Oslo anyway, and Selim Fayyad, the former PLO PM made it clear some time ago.

Under US law and the terms of the agreements, this should have resulted in a suspension of funding for ‘Palestine.’ Don’t hold your breath. Instead, the ‘Palestinian’ flag was raised at the UN for the first time, in spite of the fact that only member nations are supposed to be allowed to do so.Deceitful, which is how both Benyamin Netanyahu and virtually every Israeli figure of note referred to the speech hardly covers this tissue of lies.

The speech, by the way was attended by America’s UN ambassador and President Obama, neither of whom attended Israeli PM Benyamin Netanyahu’s subsequent speech on which more later. But it was obviously the signal for more terrorist attacks. Eitam and Naama Henkin (HY”D) , were murdered in a drive by shooting by Arabs belonging to the al-Aksa Martyrs brigade, part of Fatah. They were killed in front of four of their children. According to investigators, Eitem used his last strength to open the car door and tell his four children aged aged 4 months, 4, 7 and 9 to flee and hide. That and the fact that the alarm had been raised is all that saved them. Eitam Henkin, by the way, was an America citizen, and our Secretary of State’s response was a pro forma condemnation and an urge for both sides to ‘reduce tension.’

One of the weapons involved was a U.S. M-16 provided for PLO ‘security forces.’

Thousands of Israelis attended their funeral…and a particularly poignant moment was when their nine-year old son recited kaddish for his parents, the Jewish prayer for the dead. The Henkins left six children to be raised by their grandparents. Aside from throwing rocks and firebombs, another tactic being used is random stabbings. There have been multiple attacks of this sort.

One of the more serious ones involved the murder of Rabbi Nehemia Lavi, 41, and Aharon Banita, 21 (HY’D)and the stabbing and wounding of Mrs. Banita and her baby as Arab onlookers applauded, spat on them and kicked them.

Here’s how the BBC reported this attack: 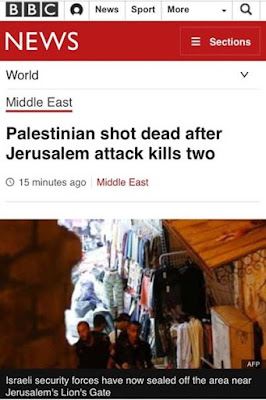 The attacks have continued, without even a faux condemnation by the PLO or Abbas. And why not? This is exactly what they’ve encouraged and planned.

For more on the Obama Administration’s reaction, Netanyahu’s UN speech and the implications here at home for America, please go to the link.

In our non-Council category, the winner was Sultan Knish with Three Cheers for Terroristine submitted by The Independent Sentinel. When Sultan Knish gets going he has a way of geting to the heart of the matter few can match. A must read.

Here are this week’s full results. Only Don Surber was unable to vote, but was not affected by the usual 2/3 vote penalty: