“Murder most foul, as in the best it is;
But this most foul, strange and unnatural.” – Hamlet by William Shakespeare, Act I Sc V

“They sent forth men to battle, But no such men return; And home, to claim their welcome, Come ashes in an urn” ― Aeschylus, Agamemnon

“It is not titles that honor men, but men that honor titles.” – Miccolo Machiavelli

“There are six things that the Lord hates, seven that are an abomination to him: haughty eyes, a lying tongue, and hands that shed innocent blood, a heart that devises wicked plans, feet that make haste to run to evil, a false witness who breathes out lies, and one who sows discord among brothers.” – Proverbs, 6:16-19

A few Council members weighed in this week on the new revelations about the Benghazi scandal that prove beyond a doubt that the president and numerous members of his regime deliberately lied to the American people to protect the president’s re-election.

This weeks’ winning Council piece, Joshuapundit’s The Shameful Stench Of Benghazi Continues is my reaction. Here’s a slice:

Both the White House and House Democrats signaled very clearly today that they have no intention of cooperating with the House Select committee investigating Benghazi.

Here’s House Democrat Rep. Adam Schiff, saying that House Democrats will refuse to participate in the Select Committee because it’s a ‘colossal waste of time’ and a partisan witch hunt.

“We have always cooperated with legitimate oversight,” Carney said this afternoon during the daily White House briefing. Asked whether the panel qualified as “legitimate,” he said: “I think if you look at what even some Republicans have said, it certainly casts doubt on the legitimacy of an effort that is so partisan in nature.”

“You know, at some point, you just have to assume that Republicans will continue this because it feeds a political objective of some sort,” he added. “At the same time you have to ask, ‘What about the American people who want to see Congress work for them?’”

I have to smile at Carney talking about how the White House has always ‘cooperated’ with legitimate oversight..Fast and Furious, NSA-Gate, IRS-Gate, Benghazi…

The Obama Administration’s meme has traveled an amazing distance, from “It was the video” to “What difference does it make” to “Who cares? That was so two years ago. And besides, this is just a partisan Republican witch hunt.” Of course, calling it that when you refuse to participate is what makes it partisan, but it does make a nice talking point to disparage whatever the committee uncovers doesn’t it?. 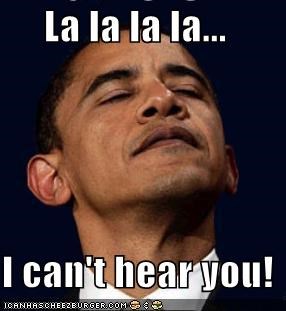 Perhaps the reason we’re still talking about Benghazi is that the Obama Administration decided to lie about it for partisan political purposes to protect President Obama’s re-election. That’s what the Rhodes e-mail admits in black and white, the one the Administration tried unsuccessfully to hide and had to be pried out of them in federal court.

And because they’ve continued to lie about it ever since. For instance, here’s something I dug out from the memory banks:

President Obama has changed his story on Benghazi several times. In an interview with MSNBC, the president claimed he’d been briefed but that ‘the intelligence was unclear’ and he was still trying to find out what had happened, but that his ‘number one responsibility is to go after folks who did this, and we’re going to make sure that we get them.’ This was on October 29th, well after he had been informed by the CIA that this was an organized and well planned attack by an al-Qaeda affiliated militia.

Yet, on October 28th, the day before that, he was speaking in Denver and had an entirely different story, saying ““The minute I found out what was happening . . . I gave the directive,” he said, “to make sure we are securing our personnel and doing whatever we need to do. I guarantee you everybody in the CIA and military knew the number-one priority was making sure our people are safe.”

Now, as I noticed at the time, what the president said about issuing a directive to the military and the CIA to do whatever they needed to do to rescue the Americans in Libya and make sure they were safe directly contradicted what then Secretary of Defense Leon Pannetta had to say to Congress, not to mention the testimony of General Martin Dempsey, Obama’s Chairman of the JCS and General Ham, then the theater commander of AFRICOM whose responsibilities included Libya who all claim they never got any such directive. And if they had, there would be a written record of it.

In our non-Council category, the winner was a great piece by Stephen Hayes at the Weekly Standard, Benghazi Lies submitted by Liberty’s Spirit The title’s self explanatory..do read it.

So, here are this week’s full results.

See you next week! Don’t forget to tune in on Monday AM for this week’s Watcher’s Forum, as the Council and their invited guests take apart one of the provocative issues of the day and weigh in…don’t you dare miss it. And tune in next week for the Council nominations Wednesday morning, a weekly newsmagazine that gives you the very best in blog and web commentary every week,just as we have for over a decade.