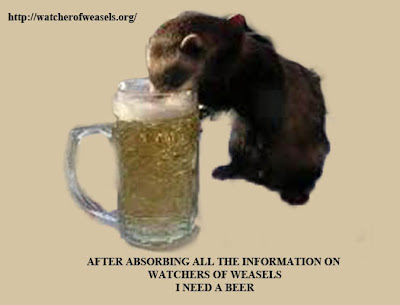 Me too, lil’ weasel!

The big event, the one that sucked all the oxygen out of the room was Mitt Romney’s pick of Paul Ryan as his running mate.

This week’s winner, Bookworm Room’s Other than all that, what has Paul Ryan ever done for us? is an extremely sharp, well written examination of that pick. Here’s a slice:

Within seconds of Romney’s announcement that Ryan would be his running mate, the chatter started. Democrats expressed delight, because they see Ryan’s stance on Medicare as one they can use to portray Romney and Ryan as Satan incarnate. A couple of years ago, they showed Ryan pushing grandma’s wheelchair off the cliff. This year, I’m sure that they’re going to show him detonating the mushroom-shaped cloud that immolates every American over 50 . . . or is it 40? Or maybe 30?

Republicans haven’t been much better. They celebrated wildly because Ryan is so wonderful, and then immediately began worrying: He’s not the right color; Wisconsin brings too few electoral votes (10), as opposed to being a major swing state; bold picks seldom end well; he’s merely a competent speaker; and, of course, he is a target because of his attempts to save Medicare from itself.

What’s funny, though, is that each person who worries about some deficit in the Ryan pick comes back with an offering to show some demographic that nobody thought about, but that Ryan can bring into the Republican fold. Right now, Republicans remind me of the famous Monty Python Life of Brian skit, with a leader expressing horror about Roman rule, and the followers reminding him that it’s not all bad. For those of you unfamiliar with that scene (is there anybody unfamiliar with that scene), the leader of the People’s Front of Judea rhetorically, and with great disdain, asks his follows what the Romans have ever done for them, only to learn that his followers are able to recognize Roman virtues:

In no particular order, here are some of the things Paul Ryan, by appearing on the ticket, will end up doing for us, American conservatives:

1. As the famous six-minute video shows, Ryan has already stared Obama down once, when he wiped out Obama’s pie-in-sky rhetoric by agreeing with Obama’s goals and then showing irrefutably that the ObamaCare numbers couldn’t possibly add up:

In our non-Council category, the winner was an old Council Favorite, Daniel Greenfield AKA Sultan Knish with The Most Divisive Campaign in American History submitted by Joshuapundit. The title pretty much sums up what it’s about..and while I’m at it, a hat tip to my pal Terresa over at The Noisy Room for sending it my way.

OK, OK, here are this week’s full results. Simply Jews was unable to vote this week, but was not subject to the mandatory 2/3 vote penalty: