Hanukkah, the Festival of Lights is celebrated this week.

While many of you may be familiar with the story of the Miracle of the Oil, the truth is that Hanukkah really celebrates another miracle – the miracle of a group of untrained farmers and tradesman with hardly any arms or experience in war utterly defeating the professional armies of the Seleucid Empire, a victory for freedom that belongs to all of us alike, Jew and Gentile.

Hanukkah celebrates not only one of the important events in Jewish history but is a celebration of the triumph of faith,of light over darkness. It takes place every year,usually in mid to late December, but while its date varies if you go by the western calendar, in the Hebrew calendar Hanukkah always falls on the eve of the 24th day of the Hebrew month of Kislev.

This war for Jewish independence took place in the second century B.C.E. The story is told in the First Book of Maccabees, and retold in the Second Book of Maccabees. An excellent contemporary military history of the war can be found in Battles of the Bible, coauthored by Chaim Herzog and Mordechai Gichon.

After his death, Alexander the Great’s empire broke into several parts, and Israel was under the control of the Seleucid Greek empire, based in Syria. Israel had lived peacefully under the Persian Empire and under the Ptolemic empire (of Egypt), both which tolerated Judaism but the Seleucid Emperor Antiochus Epiphanes was an arrogant, bigoted ruler who attempted to force the Jews to abandon their religion and to adopt the Seleucid Greek customs and worship,which included idolatry.

There were those Jews back then whom considered themselves `modern’ and `assimilated’ who were willing to go along with this, even to the extent of having surgical operations to reverse circumcision. They even collaborated with the Selucid Greeks in subjecting their own people.

Others did not, and they were persecuted vigorously and brutalized by the Seleucid Greeks. Even the teaching of Torah,the Jewish Scriptures was forbidden.

Tyrants always overreach and the start of the Maccabee Revolt sprang from a single spontaneous act of resistance. In the foothills village of Modi’in in 167BCE, a Greek army unit set up an altar, and ordered the local Jewish rabbi, Mattathias, to sacrifice a pig and eat it. He refused, as did his five sons. When a Jewish collaborator came forward to offer to perform the sacrifice, a furious Mattathias “ran and killed him on the spot, killed the king’s officer who was forcing them to sacrifice, and tore down the altar” (1 Mac. 2:15-25).

Mattathias, his sons and their followers then headed for the Judean hills, to launch a guerrilla war along with a handful of followers. They were farmers who had no military training, facing a war with a well armed professional military. There hadn’t been a Jewish army since Babylon had destroyed the Judean kingdom four centuries before. The only weapons they had were farming tools and whatever simple weapons they could construct, such as bows, maces and slings. During this first year, Mattathias died, and his middle son Judah took over command as his successor.

Nicknamed “the hammer” (“Maccabee,” in Hebrew), Judah put together a guerrilla army that staged daring nighttime raids on the Greek outposts, then melted back into the countryside. His successes attracted more supporters, and the revolt spread.

The war went on for 25 years, one of the most singular wars for independence in history. It’s amazing that it was fought at all, let alone won.

The Seleucids and their King Antiochus were determined to crush the revolt. They sent huge, well equipped armies into Israel to subdue the Jews. They were all defeated, at odds that seem miraculous even today. Judah Maccabee turned out to be a military genius, using unheard of tactics, leading the Greek phalanxes into the hills where they could not maneuver and destroying them in ambushes.

To give you an idea of how essential the Jewish heartland of Judea and Samaria was and is to Israel’s survival then and now, the map below shows where the major battles of the war took place.(hat tip, Carl) Click on it to enlarge it: 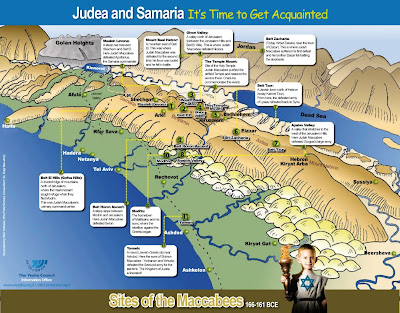 Judea and Samaria were a natural fortress that completely defied all attempts of the Seleucid armies to take it, a lesson well worth remembering even today. Even their famous war elephants, the heavy tanks of the day were of no use in that terrain.

One thing that is seldom mentioned about the war is the fact that a significant part of it took place against the Hellenized, `modern’,`assimilated’ Jewish traitors I mentioned earlier, who were more than willing to abandon the Jewish way of life and supported their Seleucid masters against their fellow Jews.

As Ecclesiastes famously said in the Megillot, there’s nothing new under the sun.

In 164 BCE, the Jews utterly routed a large force commanded by the Seluecid Viceroy Lysias that had outnumbered them two to one. That battle took place six miles north of Hebron, near the Jewish fortress of Beth-zur. The victory allowed Judah and his army to retake Jerusalem.

When they entered Jerusalem, Judah and his followers entered the Holy Temple on the Temple Mount. The Temple had been wrecked and horribly desecrated, with profanities scrawled on the walls and the Ark by the Seleucids.

So the Maccabees built a new altar. When the time came to light the N’er Tamid, the Eternal Light of the Temple, the Jews could find only one sanctified jar of oil marked with the seal of the High Priest. It was enough to last one evening. On the 25th of Kislev, in the year 164 BCE,the lamp was lit with this small jar of oil and, miraculously, stayed lit for eight days, until more oil suitable for the temple was made. The eight days of Hanukkah celebrate that miracle, as well as the divine intervention that had led the Jews to amazing victories over well-equipped enemies far superior in numbers. “Therefore, carrying ivy-wreathed wands and beautiful branches and also fronds of palm, they offered hymns of thanksgiving to Him who had given success to the purifying of His own holy place” (2 Mac. 10:7).

The war itself continued. In 160 BCE, near modern-day Ramallah, Judah was killed, but Judah’s brother Jonathan, and then his brother Simon took command of the Jewish army, finally winning complete independence in 142 BCE. At last, “All the people sat under their own vines and fig trees, and there was none to make them afraid” (1 Mac. 14:12).

Towards the end of the war, Antiochus and the Seleucids became so obsessed with defeating the Israelites that they sacked their own cities and sold their own citizens into slavery to get money to pursue the war against the Jews.

That verse from the first Book Of Maccabee, by the way, was quoted by America’s first president George Washington in his famous letter to the Jewish community in Providence, Rhode Island in 1790, telling them they were welcome in America. Being obviously familiar with the story of the Maccabees,General Washington may well have taken comfort in the dark days of our own struggle for independence and freedom from tyranny from it.

The War of the Maccabees was the first war ever fought for religious freedom. Somehow, a group of farmers who refused to bow to their oppressors defeated a mighty empire and its immense standing armies. There seems to be no plausible explanation for the victory of the Jews except that it was a miracle.

Hanukkah reminds us that with G-d’s help, victory over evil is assured, that light triumphs over darkness and no miracle is impossible. Modern Israel and the survival of the Jewish people against all odds are proof of that.

Aside from the Hanukkiah (candlesticks), the other great symbol of Hanukkah are those small spinning tops known as dreidels.

The four letters which appear on the four corners of a dreidel allude to the miracle of Hanukkah. They spell out: Nes (N-miracle), Gadol (G-great), Haya (H-happened) and Sham (S-there, meaning in Israel). Or, `a great miracle happened there.’

And this is also a time for Jews to light the menorah, to ‘make public the miracle and shed light on the world, and to celebrate and to sing this ancient hymn, ‘Maoz Tzur’, (Rock of Ages). This version, fittingly, was cooked up by students at the Technion, one of the most advanced scientific seats of learning in the entire world and a symbol of Israel’s rebirth: