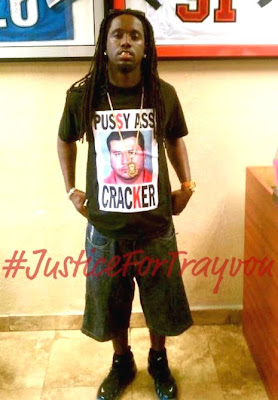 This week’s Watcher’s Forum question concerns the Trayvon Martin case, which involves neighborhood watch volunteer George Zimmerman and one Trayvon Martin,who Zimmerman saw inside his gated community and who apparently ended up shot and killed after an altercation between the two.

Zimmerman was originally not charged by the police, but was brought to trial and charged with murder two after the case attracted national attention and resulted in outrage,threats of violence and racial animosity sparked by people like Al Sharpton, Jesse Jackson and even comments by President Obama.Oh, and a nifty new line of racist tee shirts and assorted gear.

Zimmerman is claiming self defense.

As the evidence becomes released publicly, here’s how some of the Watcher’s Council members see things ending up:

The Noisy Room: I believe that Zimmerman will be found not-guilty and the state will wind up paying his costs for litigation. In my opinion, Zimmerman will eventually sue the FL State Prosecutor, Angela Corey , for gross malfeasance and subornation of perjury. I also believe Zimmerman has standing to sue NBC for slander for falsely impugning him to millions of people. Since the DOJ is actively involved in this, it could go all the way to the Supremes.

Bookworm Room: What she said.

The Independent Sentinel :I agree with Bookworm.

A lawsuit against the New Black Panthers Is another possibility.

I believe the DOJ will come up with a “hate crime” charge though it appears to be unjustified because that is the world we currently live in.

The charge of second degree murder is as legitimate as the Duke Lacrosse case which was another example of media malfeasance.

The Colossus of Rhodey:Zimmerman will be convicted on a lesser charge but will serve no jail time. The feds will not pursue any civil rights charges because they’re tired of getting laughed out of court. This will lead to some protests and rioting by the Farrakhanesque-led loons, but nothing on the scale of the LA riots post-Rodney King. There’s a high likelihood Martin’s parents will seek civil damages (akin to what OJ Simpson faced), but Zimmerman may do same, especially against the media.

Joshuapundit: Key witnesses appear to have changed their stories back and forth since they were initially interviewed by the police when the original incident happened.This is probably the result of the fear of violence at the hands of Trayvon Martin’s backers, with the result that the witnesses are now mostly saying they’re not sure what they saw or heard.

Since the jury is going to have to convict based on the premise of guilt beyond a reasonable doubt, I don’t see how the prosecution makes a murder two rap stick unless they manage to seat a predominantly black jury and are successful in pitching ‘jury nullification’ the way the OJ Simpson defense team did in his criminal trial.

I would not rule out in the least a hate crime or civil rights charge against George Zimmerman from Obama’s Department of Justice. Not only is it going to be easier than murder two, but the DOJ has nothing to lose except taxpayer money, and even if they’re unsuccessful, they’ll be able to punish Zimmerman by bankrupting him.

The Razor:While in general agreement with Hube and Terresa, I’m viewing this case as a Reverse OJ where, like the Juice, Zimmerman will walk and the response will be along racial lines. Blacks will be shocked, whites will agree with the verdict, and riots will break out. Not that it takes much to start a riot these days; in fact I expect riots whether or not Zimmerman is convicted.

This case was painted in black in white from the very beginning. I remember no less than Shepherd Smith on the liberal-despised Fox News practically busting out in tears over Martin’s errand for skittles. It was only weeks later that it came out that Zimmerman is much more Black than Elizabeth Warren is Cherokee (1/4-1/8 depending on source vs 1/32.) Racial fractions. It’s like a complete return to the 1850’s but I digress. Then his wounds, and Martin’s less than stellar character eventually leaked.

I still believe that the situation Zimmerman and Martin found themselves in was complex, and that the Truth has yet to come out. But given the hysteria of the event, I doubt it can, and even if it did, wouldn’t matter. People have made up their minds, and nothing will change them.

The Right Planet:When it comes to court cases anymore, I can’t predict anything with accuracy. See, back when O.J. was accused of butchering Nicole Simpson and Ronald Goldman, I thought that the blood in the Bronco–the car chase, the blood on the door of O.J.’s house; the bloody glove with everybody’s blood on it (e.g. O.J.’s, Nicole’s, Ron’s)–laying by his houseboy’s window would be enough to convict “The Juice” hands-down. But we now know different. It was “social justice.” I will predict the same result in the Trayvon Martin case–a crazy white “Hispanic” brutally and mercilessly murdered a perfectly innocent, angelic black person and should burn in hell for eternity. This will serve the Frankfurt School-inspired narrative for “social justice” famously, i.e Obama et ilk, and the state-run press to a tee. Back out quiet … tell me if I’m wrong.