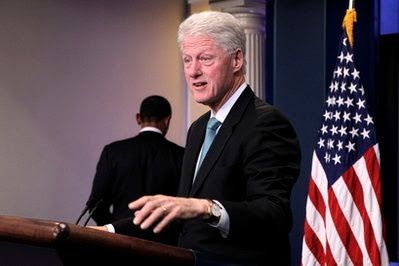 This was definitely the week of Mr. Bill’s revenge on the man he once labeled ‘a Chicago thug’. Not only was President Obama forced to call on Bubba for assistance in trying to get the Lame Duck House Democrats to swallow Obama’s compromise with the Republicans on taxes, but at their joint press conference we saw something queer, disturbing and never before seen in our beloved Republic.

After Obama spoke a sentence or two about what a productive meeting they had , Clinton made an initial statement about Obama’s tax compromise with the Republicans.  ..and then simply kept rolling, staying at the podium to call on the excited reporters and take questions.

Obama stood there in silence for a few minutes, and then said he had to go see Michelle, as he was keeping her “waiting”   and had to toddle along to a Holiday party.

And lo and behold, we saw Clinton dismiss him, saying, “I don’t want to make her mad, please go.”

After which Mr. Bill rambled on for a good while not only about the tax bill,(did anyone in the dinosaur media mention that both Clinton and Obama were trying to prevent the Clinton era taxation levels from returning because they were poisonous to the economy?) but a whole slew of other topics, including pimping for the START treaty, AKA unilateral nuclear disarmament by the US.

Observe this pathetic spectacle. Here we have a sitting president of the United States getting paid $400,000 per year plus innumerable perks, including room and board and free medical ducking out and running for cover to attend holiday parties with Mooch-elle while Bill Clinton, who is apparently now our Assistant President does the heavy lifting and substitutes for him!

Being president is more than speeches,parties, golf, $100 per pound wagyu steak, Air Force One and foreign trips…it’s a job and it involves work, especially when the heat is on. What and whom did we hire?

I can only imagine being a fly on the wall and listening to the discussion the Clintons had between themselves over this afterward.It must have been hilarious.

So that said, let’s see what we have this week….