Welcome to the Watcher’s Council, a blogging group that’s your must read weekly journal of news and opinion written by some of the most incisive blogs in the ‘sphere, and the longest running group of its kind in existence. Every week, the members nominate two posts each, one written by themselves and one written by someone from outside the group for consideration by the whole Council.Then we vote on the best two posts, with the results appearing on Friday morning.

This weeks’ contest is lovingly dedicated to the memory of Rabbi Abraham Avrech (Z”l).

The last few day saw the interesting proximity of two holidays, the Jewish festival of Purim and St. Patrick’s Day. Interestingly enough, both holidays, by tradition, feature partying and the hopefully responsible use of alcohol. (!)

Purim of course, is about the Jews turnabout on a Persian maniac who wanted to annihilate them all. As Ecclesiastes put it, there ain’t nothin’ new under the sun. And what better way to portray it than as a Spaghetti Western? :

St. Patrick’s Day is a cultural and religious holiday based on the death date of the patron saint of Ireland, Saint Patrick (c. AD 385–461). It’s essentially become a world party, with festivals held as far afield as Malaysia, Japan, Montserrat and Germany. There’s also something about snakes,but hopefully not the kind you see when you drink too much.My favorite part? Aside from the Bushmills, the Guinness and the fond memories of some previous adventures of my misspent youth, it’s the music:

Speaking of celebrations, here’s one we’ll celebrate a bit belatedly..the birthday of our dear friend Hube, of the  The Colossus of Rhodey! The actual event occurred March 3rd, and somehow got lost in the mix, without anyone letting on (Translation: Rob screwed up). So what the hey, why not celebrate it now? Just be careful with that loincloth, big fella!

For Hube’s special cake, I picked out a bundt style Delaware Raisin cake, made with raisins, chopped apples, cinnamon, cloves and nutmeg: 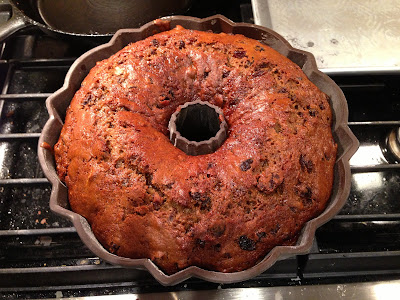 Chips and various kinds of salsa on the side, because they go well with something I also know Hube likes… Aside from being a great guy all around, Hube has one the most unique blogs you’ll find anywhere, on that looks at sci-fi, comic books,film, media, TV and graphic art as signposts as to which way our culture is going.

Tiempo passado, mi querido amigo..but hopefully it gets better as it goes, no? Many many more.

The Council In Action:

Author and Council Alumnus Trever Loudon will tape his appearance for Glenn Beck’s The Blaze TV on March 26th and his spot will air at 5PM. Check your local listings. And definitely don’t miss this one!

Dave Schuler at The Glittering Eye celebrated his 10th anniversary in the blogosphere, and his entry this week in the links below concerns his reflections on a decade of blogging..including the secret of where the name of his site came from! Happy tenth, Dave!

Elise Ronan of Liberty’s Spirit has a new post up at the Times of Israel, Tzedakah or Tikkun Olam, How about Just Being Kind to Families with Special Needs

Nice Deb’s new post at Breitbart is up, Obama May Be Leading From Behind But He’s Looking Sharp In His Jeans

Joshuapundit’s latest is up at the Times of Israel, Abbas calls Israeli defense against Gaza rocket attacks ‘Cold blooded murder’