The Council has spoken, choosing the winners in this week’s competition. And there’s some superb weekend reading in in store for you.

In the Council category, the winner this week was American Digest with his in depth essay on the Christmas crotch bomber # Lowballing Death: Keeping the Northwest 253 Numbers Down:

I’ve noticed the chant more and more as the days have gone by. It’s a chant usually preceded by the world “only;” as in “Even if the bomb had gone off it would have ‘only’ killed 290.”

“290” is by far the most magical number in the morass of magical thinking that’s subsumed discussion of the “near disaster” of the Christmas attempt to give Northwest 253 a “premature landing”. The number “290” is the number of passengers and crew on board the aircraft. “290” is a number we hear a lot in conjunction with discussion of this failed attempt at mass murder. A lot of people in the administration, the TSA, and those on the left attempting to excuse what happened would be happy if “290” stuck. If “290” can be made to stick then the disaster, tragic as it might have been, is merely a “pinprick” and can be, like so many other aspects of this monumental failure, lowballed.

But “290” is, looked at from any reasonable point of view, at the bottom of the scale when it comes to discussing how many might have lost their lives. The ultimate outcome of NW253 being brought down could have been much worse and, like the attacks against the World Trade Center on 9/11, easily have risen into the thousands.

When referring to “290” the Obama administration along with their media cohorts and apologists are assuming that the =/-400,000 pound Airbus 300 would have vaporized in thin air and, like some event in the Bermuda Triangle, the aircraft, passengers and crew would have simply gone to their reward in the middle of the sky with only a puff of pixie dust left behind. This is sweet nonsense since airliners, when bombed in mid-heaven, have a nasty habit of coming to earth. In flames and sometimes in pieces.

In flaming pieces is what happened to the closest parallel to NW253, the downing in Lockerbie, Scotland of PanAm 103. In that “incident” the parts of the aircraft fell onto a village of a few thousand people and killed 11 people on the ground as well as the 259 on the plane.

At that point comparisons between PanAm 210 and NW253 diverge. Flight 210 was on climb out from London and, interestingly enough, on a course that would have taken it into Detroit. NW253 was on final approach to the same airport on a flight path that took it over the Detroit metropolitan area with a population of some 3,900,000. It is a much, much denser area; one that might be described as a “target rich environment” for a 400,000 pound flying bomb.

In the non-Council category, the winner this week is a moving piece by Michael Yon ( and as always with Yon, the accompanying photos are all worth a thousand words) on Afghanistan, with Into Thine Hand I Commit My Spirit :

On this small base surrounded by a mixture of enemy and friendly territory, a memorial has been erected just next to the Chapel. Inside the tepee are 21 photos of 21 soldiers killed during the first months of a year-long tour of duty. The fallen will belong forever to the honor rolls of the 1-17th Infantry Battalion, 5th Brigade, 2nd Infantry Division, and they will join the sacred list of names of those who have given their lives in service of the United States of America.

The symbol of the 2nd Infantry Division is the Indian Head. At night, soldiers of the “Indian Head Division” can be seen passing by the tepee, sometimes stopping to peer inside before walking into the darkness.

Sometimes the soldiers walk by carrying lights that are red or green, or sometimes white. Tonight, Cobra Battery was firing illumination rounds from the cannons, which boom from the darkness, arcing a round into the night, where miles away a canister unsheathes, and the parachute opens, and brightness floats silently, shimmering over the valley where these soldiers died.

Some of our readers noticed that the site was down for some time yesterday. What happened is that several of the highly trained monkeys who are responsible for site maintenance in our secret bunker in the American Heartland apparently did some belated New Years Eve celebrating, resulting in a fried server.

The Management promptly disciplined the offenders and has repaired the damage. Our apologies: 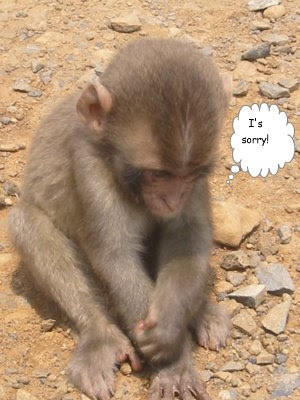 If you want to see your blog piece listed on the Watcher’s Council page as an honorable mention, our generous offer of link whorage remains open. Here’s how you take advantage of it:

Here’s the complete rundown of this week’s results. Only the Razor was unable to vote, and he was the only one affected by the mandatory 2/3 vote penalty.