At least 20 people are dead and many wounded after a terrorist attack in Manchester, UK.

The attack occurred at a concert in Manchester Arena by pop singer Ariana Grande.

It was diabolically planed to exert maximum carnage. The killer or killers waited until the show was over and people were packed in and streaming for the exists, which is exactly where the bomb was detonated, by one of the exits. The bomb itself was a ‘nail bomb’ something anyone who was in Israel during the Second Intifada is familiar with. The bomb or bombs are packed with nails, screws,nuts and bolts so that when the explosion occurs, these items become deadly shrapnel and increase the carnage. The Arabs often added a second touch by soaking the shrapnel in strychnine before packing them inside the bomb. 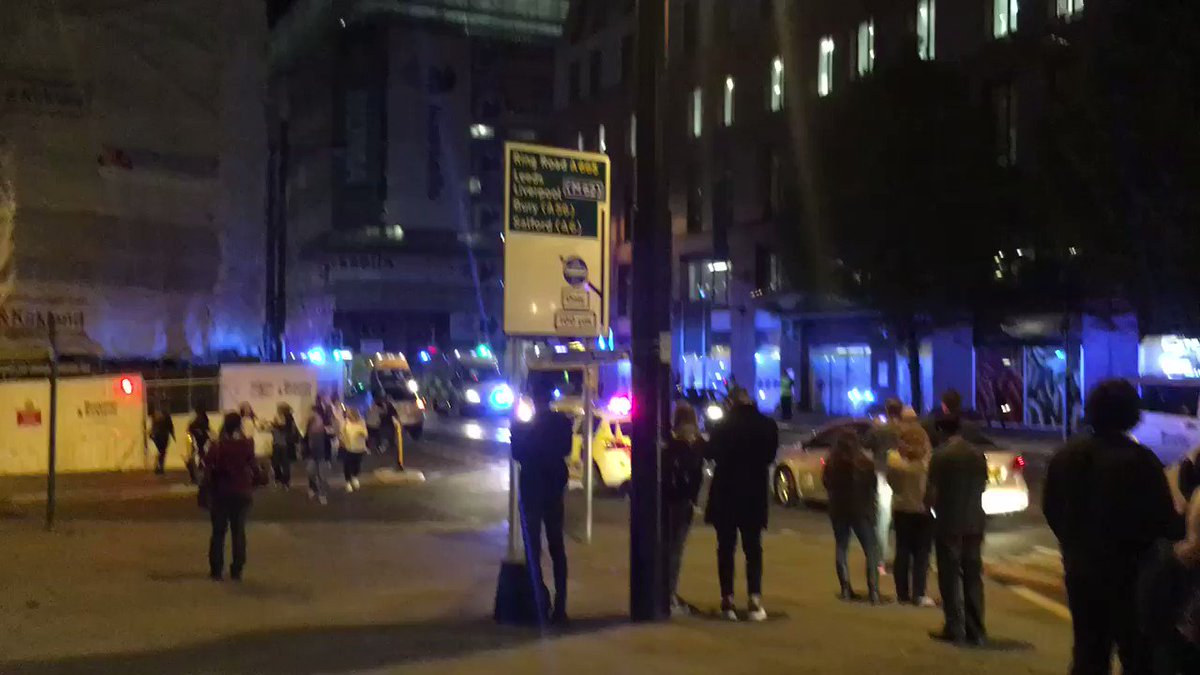 Since this was a concert geared towards very young teenagers and even pre-teens, many of the casualties from the Manchester terrorist attack will end up being young children.

The British authorities admitted right off that this was terrorism. What else could they say it was? One question they’ll need to answer once their forensics teams get to work is whether this was a suicide bomber or something exploded electronically. The former is more likely, but if it was the latter, we might be looking at several jihadis involved.

Ironically, the Manchester terrorist attack occurred on the same date that Drummer Lee Rigby was beheaded in broad daylight on a London street just a short distance away for his army barracks. That was 4 years ago, but I wonder what’s really changed.

You can’t tar all Muslims as terrorists. But if even ten percent of them – and based on the Pew polls, that’s a ridiculously low estimate – we’re talking about a huge number, 10% of 1.5 billion people. That is a larger amount then twice the total population of France,Muslims included. This is exactly what President Trump was talking about when he spoke to the leaders of Muslim nations in Saudi Arabia yesterday. The president didn’t put it this way, but he essentially told them that it is time that the Muslim nations took responsibility for ending this sort of thing. I have a feeling – call it a hope- that a number of them may have responded to that positively.

No society can normalize this kind of behavior as business as usual, and that includes the Muslim nations. This Manchester terrorist attack underlined what President Trump had to say.

British Prime Minister Theresa May has suspended her campaign for re-election although the election will still obviously be held. But this is going to shock the UK profoundly. It was outside of London where most of these attacks have occurred, it was at a large public event and aimed at a particularly vulnerable demographic.

The Brits, by and large are an odd lot. They will put up with a great deal to preserve the peace, the usual considerations and the proprieties…until something pushes them over the line.

It’ll be interesting to see what effect this has.

UPDATE: The death toll has reached 22, including an 8-year-old girl. The killer has been identified as 23-year-old Salman Abedi, and yes, it apparently was a suicide bomber rather tha nan electronic device. Of course, Abedi was known to British authorities prior to the attack as a radical with ties to ISIS, but was still walking around free for some reason. ISIS has claimed ‘credit’ for the attack.

Another man was arrested by police this morning in the Manchester neighborhood of Chorlton in connection with the attack. The police and British Prime Minister Theresa May both made statements that the focus of the investigation was to determine whether the bomber “was acting alone, or was part of a wider group.”

Just another day in the War on Jihad.

The French election provides another entry in the “Do Progressives even listen to themselves?” category

May 8, 2017 Bookworm World Comments Off on The French election provides another entry in the “Do Progressives even listen to themselves?” category

Macron’s victory in the French election has provided Progressives with another opportunity to reveal their hypocrisy, stupidity, and all-around nastiness. I had a marvelous trip this past weekend, and came back yearning to blog, only to find waiting for me a legal project with a tight deadline. While I work [Read More]

Jihad UK – 5 Dead, Many Injured In Attack On British Parliament

March 22, 2017 JoshuaPundit World Comments Off on Jihad UK – 5 Dead, Many Injured In Attack On British Parliament

Today, there was yet another episode of Jihad UK as an attack on the Westminster Bridge occurred when a lone ‘Asian’ jihadi plowed his four wheel drive vehicle into crowds of people on the bridge, killing five and injuring dozens. The killer got onto the grounds on Parliament, exited his [Read More]