Today, the Senate Foreign Relations Committee finally took a major step in penalizing Palestine’s blood money, it’s knowing and enthusiastic financing of terrorism. The committee voted 17-4 to send the Taylor Force Act to the full senate for a vote, where it will undoubtedly pass.

The bill, named after an American who was murdered by a Palestinian terrorist in Israel while strolling along the Jaffa boardwalk last year would cut off U.S. aid to the Palestinian Authority until it ends its policy which has rewarded murderers with over $300 million to terrorists and their families annually.

The Committee also strengthened the bill by adding a key amendment that would create an escrow account for the money that is being withheld from the Palestinians as a result of the law. The escrow period was set at one year, and the money will be released only if both the payments to terrorists are stopped and the “pay to slay” laws are officially repealed. After that period it would no longer be available.

It was supported by all of the Republican members of the committee, including Sen. Marco Rubio (R., Fla.), an original cosponsor of the bill, and six of the Democrats—Sens. Ben Cardin (Md.), Bob Menendez (N.J.), Tim Kaine (Va.), Ed Markey (Mass.), Chris Coons (Del.), and Jeanne Shaheen (N.H.).

Sen. Tim Kaine (who has some interesting ties to the Muslim Brotherhood) proposed during the committee meeting that the escrow period should be set at two years, and that the money should be released if the Palestinian Authority “initiated” the process to cease payments to terrorists, arguing that actually repealing the current laws financing terrorism could be “too high of a hurdle” for the Palestinians.

READ  Turn the economy back on; even Fauci is confessing... LET'S GO BACK TO WORK

Both ideas flopped with the Republicans and a couple of the Democrats and were rejected by the committee. This seems to be a trend. Even the Brits are finally wising up to the con and have suspended a significant amount of their share of Palestine’s blood money. 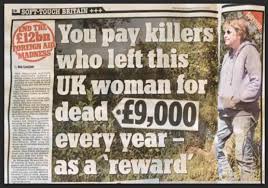 One thing I hope the Senate adds would be an amendment that would allow American citizens who have been victims of Palestine’s financing of terror to sue in court and recover judgements out of the escrow account.

Senator Marco Rubio, an original con-sponsor of the bill praised the passing of the Act through the Senate Committee, saying, “The Taylor Force Act’s strong, bipartisan support in committee sends a powerful message that the United States should hold the Palestinian Authority accountable for any payments to terrorists who engage in terrorism or violence against Israelis or Americans, or any payments to the families of terrorists.”

“‎The Palestinian Authority’s pay-for-slay program for terrorists is an outrage, and this bill will help bring an end this abhorrent practice.”

The ‘pay for slay’ remark refers to Mahmoud Abbas and the Palestinian Authority’s legal policies of rewarding terrorists and their families higher payments based on the severity of the terrorist attack. The more Jews murdered, the higher the monthly payments.

To show you how this works, Omar al-Abed’s claim to fame is the murder of 70-year old Yosef Salomon, his daughter 46-year old Chaya Salomon, and his son, 36-year old Elad Salomon (HY”D) while they were sitting peacefully at their Sabbath table. The grandmother, 68-year old Tova Salomon, was seriously wounded. The carnage would have been even worse if not for some quick thinking by daughter-in-law Michal Salomon, who rushed her five children into a room, locked the door and called the police.

READ  Censored: Another US Firm Does The Chinese Communist Party's Dirty Work

This obscene murderer will receive the equivalent of $3,000 per month from Abbas, courtesy of your tax dollars. That’s a very hefty sum in ‘Palestine.’

And that’s only one example of exactly why the Taylor Force Act is a necessity. It should have been enacted years ago.

No civilized country should be paying ‘Palestine’s blood money.

The Jerusalem Temple Mount Crisis – Why it Erupted, How To Solve It

Recent events continue show exactly why the peace process in the Middle East is dead on arrival right now, at least where Israel and the Palestinian authority is concerned. The Jerusalem Temple Mount crisis is the latest example of Mahmoud Abbas’s destructive tactics in attempting to sabotage it and stay [Read More]

President Trump came into office with the idea of succeeding where other presidents had failed. His goal was to forge a comprehensive Mideast peace process that would both end the Israeli-Palestinian conflict and create a bloc between the most powerful Sunni States of Egypt, Saudi Arabia and the Emirates (and [Read More]