The world, and especially the EU was shocked at the brutality the Spanish government used in an attempt to suppress a referendum on the independence of Catalonia. The paramilitary Guardia Civil was particularly brutal as they invaded polling places. Over 800 people were reported injured as well as a dozen of so Guardia:

Catalonia is the extreme northeast of Spain. It consists of four provinces: Barcelona, Girona, Lleida, and Tarragona. The capital and largest city is Barcelona.

Catalonia was originally an independent principality with its own language and culture. That ended after the War of Spanish Secession in 1714, when Catalonia picked the wrong horse, Spain was essentially united by the Bourbon Philip V of Spain and Catalan was replaced on all legal documents with Castilian Spanish.

But Catalonia has remained something of a separate part of Spain, with a unique culture. During the Spanish Civil War, Catalonia, which had socialist movements as an important part of its politics dating back to the mid 19th century sided with the Republic against Franco, which again led to a certain amount of repression when Franco won, including abolishing Catalan institutions and banning the official use of the Catalan language again. Things eased up in the latter part of Franco’s rule, and considerably more after Franco died in 1975.

While many people now want to see Catalonia gain its independence (and the Catalonian independence movement wants to join the EU as a separate, independent country) there’s an interesting detail that no one’s mentioning, and it definitely figures in.

Catalonia has always trended a lot more to the Left than the rest of Spain. And it is slowly but surely in the process of Islamization, aided and abetted by its regional government.   For more than a decade the Muslim population of Catalonia has been rapidly growing, because Catalonia’s politicians have made it a prime destination for Muslim migrants and ‘refugees.’ A large part of the population, now well over 7% of Catalonia, has become radicalized (or already were) and are calling for the establishment of a Muslim state in what they still refer to by the name of their former conquest, as ‘al-Andaluz.’

The Islamization was deliberately started and encouraged by the Catalonian separatist movement.

The central person of the Catalan independence movement is Jordi Pujol, who was  from 1980 to 2003 the president of the Generalitat de Catalunya, literally the governor of Catalonia. Aside from being indicted along with members of his family for massive corruption and money laundering, Pujol and his cronies decided that Islamic migration was the solution to Catalonia’s low birth rate and their plans for an independent Catalonia.

The separatists hoped to get lots of of cheap labor forces  which they could win over as Catalonian nationalists for the separatist movement. And they also figured that these new migrants would be taught to be Catalan speakers. After all, a worker, who could only speak Catalan and Arabic and was dependent on social benefits would hardly be able to leave Catalonia.

So the Muslim population grew to more than 500,000 and even more, when you  take the amount of illegal migration into consideration. In 2012, the second most common name in the province of Girona was Mohammed. In the region of Segarra (Lérida), 55% of the children born in 2014 had foreign mothers. Salt (Girona) has become a major center of Salafis and Islamists: 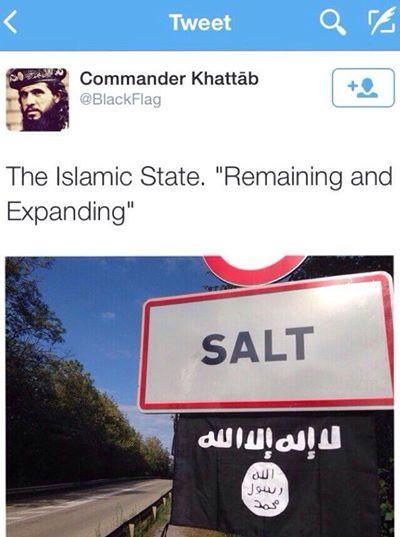 Besides Salt, other towns too became centers of Salafist Islam in Spain. The movement has its seat in Tarragona, but has important branches in Badalona, Calafell, Cunit, El Vendrel, Gerona, Lleida, Mataró, Reus, Roda de Bara, Rubí, Santa Coloma de Gramenet, Sant Boi, Torredembarra, Valls, Vic and Vilanova. Barcelona alone has 5 Salafist mosques. Just like elsewhere, the Salafists in Catalonia preach that the Sharia law is above Spanish law, they push the development of Muslim parallel societies, and have established sharia courts and morality police  that enforce the adherence to Islamic rules.

Catalonia’s seperatists made the same mistake Angela Merkel made. They never figured on Islam taking them over instead of integrating peacefully. Catalonia  is now one of  the most important Mediterranean centers of radical Islamists.And potentially a base in Europe for the takeover and expaniasion of Islamism into places like Spain, southern France and Italy.

The EU is likely to even encourage this scenario by extending EU membership and financial incentives to  a newly independent Catalonia in exchange for using it  as a dumping ground for the Muslim migrants and refugees countries like  Denmark, Hungary, the Czech Republic and Poland are refusing to take. And for the surplus Muslim migrants Germany and France want to rid themselves of.

Of course the catch for that brilliant plan is that these Muslims are unlikely to be content with retaking Catalonia, or even all of Spain. They will expand north, just as they did in the 14th century.

When you take these facts into consideration and consider Spain’s own history with Islam, the idea of an independent Catalonia takes on a very different aroma.

Paul Joseph Watson savagely eviscerates the ignorance, hypocrisy, and self-loathing behind Leftist attacks against whites and support for Islam. As always with Paul Joseph Watson videos, I have a few content warnings: Obscenity, sarcasm, rampant ridiculing of Leftist ignorance and hypocrisy, a failure properly to appreciate cultural relativism, an obsession [Read More]

Jihad UK – 5 Dead, Many Injured In Attack On British Parliament

March 22, 2017 JoshuaPundit World Comments Off on Jihad UK – 5 Dead, Many Injured In Attack On British Parliament

Today, there was yet another episode of Jihad UK as an attack on the Westminster Bridge occurred when a lone ‘Asian’ jihadi plowed his four wheel drive vehicle into crowds of people on the bridge, killing five and injuring dozens. The killer got onto the grounds on Parliament, exited his [Read More]