The latest revelations about both the fake Trump dossier was the basis for a huge lie, repeated endlessly by the trained seals in the Democrat media. The Democrat’s Russia lie has now imploded, and the fallout has revealed other aspects of actual collusion with the Russians, including a $148 million dollar kickback to the Clintons in exchange for in exchange for then Secretary of State Hillary Clinton green lighting a deal that gave Vladimir Putin and Russia control over 20% of the United State’s uranium production.

Not only that, but the new evidence has revealed facts that seem to point to collusion and the use of America’s intelligence apparatus for partisan political purposes.

Like most things concerning the Clintons, this is a very twisted web, and deliberately so in my opinion. I’ll do my best to try and unravel it so it’s easier to understand.

The Democrat’s Russia lie really went public when it was concocted by Mrs. Clinton and her campaign manager John Podesta on election night once she stopped screaming, pounding the walls and throwing things But as we now know, the groundwork was laid far earlier. The infamous fake “Russia dossier” created by a company called Fusion GPS was partly funded (if not entirely) by the Clinton campaign and the Democratic National Committee. And the sources of the ‘intelligence’ in that “Russia-Trump dossier” were senior Russian officials. 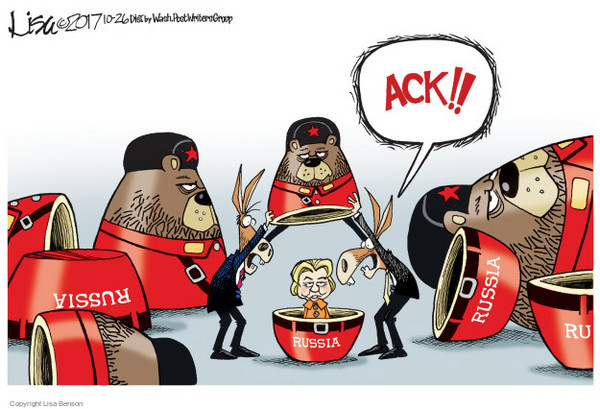 Let’s take a breath here to realize what we’re talking about. Here is a political candidate and her party colluding with Russia to attempt to influence our election.

As an aside, let’s recall that John Podesta is no stranger to Putin and the Russians, to the tune of, oh, a mere $35 million investment they gave a company once Podesta was named to the board. And a $170,000 lobbying contract with the Podesta Group, run by by John Podesta’s brother, Tony Podesta.

Fusion GPS claimed to reporters (though they refused to provide any evidence) that a Republican funded separate opposition research on Trump. But as the Washington Post,hardly a fan of President Trump itself reported, the dossier did not exist until after the Democrats hired Fusion GPS.

And as was later revealed, Christopher Steele, the former spy, got this ‘information’ by paying his sources, who happily supplied him with the most outlandish nonsense they could think of as long as they got paid. The dossier was completely bogus. It got basic facts about Russia wrong, and made numerous claims that were completely false, like the claim that Trump lawyer Michael Cohen met with Federation Council foreign affairs head Konstantin Kosachev in Prague. Cohen, as you’ll recall, proved he’d never been there at all.

But the worst it yet to come. It appears that the fake dossier was used by the Obama Administration to justify wiretaps and use America’s intelligence agencies to conduct surveillance on American citizens…because they were involved with the Trump Campaign in an election year. And – just a coincidence, of course – just before he left office, President Obama changed to rules for disseminating intelligence by executive order so that the identities of the people who were under surveillance and their personal information was unmasked and spread throughout numerous agencies. After which, of course, they were leaked to the media.

This included wiretaps on Trump Towers and what appears to be a deliberate attempt to pervert the FISA court system. And as former Obama DNI James Clapper let slip yesterday on CNN the wiretapping, in his words “began before the dossier.”

Let’s again look at exactly what this means. A sitting president used the U.S. intelligence agencies to spy on a presidential candidate from the opposition party in an election year. And later on, Clinton campaign opposition research using disinformation from top Russian intelligence officials was used as a license by the Obama Administration to conduct spying on an opposing political party’s campaign.

And the FBI was directly involved in this.They reimbursed the ‘expenses’ involved in collecting the ‘intelligence’ in the fake dossier, some of which may very well have involved reimbursing payments to the Russian officials involved. We don’t know for sure how much was paid or to whom, because so far the FBI has resisted all oversight by congressional committees looking into the FBI’s role in funding and use of the dossier. Rep. David Nunes, Chairman of the House Intelligence Committee is being very careful here, but Fusion GPS operative Christopher Steele has already admitted that the FBI reimbursed Fusion GPS. We’ll obviously know the full extent of this once their banking records are investigated, something the DOJ can provide.

You’ll notice that Tucker Carlson and Rep. Nunes briefly discussed the Uranium One scandal, which is directly connected to the entire Democrat’s Russian Lie. We’ll get to that in a bit. But first, let’s examine exactly who Fusion GPS is and what they do.

Fusion GPS is a company made up primarily of former journalists. They’re extremely well connected to a lot of the current cast of trained seals in the media. What they specialize in is ‘media relations’ which translates into using their connections to spike or downplay certain news items and promoting favorable narratives for their employers. And their employers? Some of the most repressive dictatorships on the face of the earth.

The Senate Judiciary committee has heard testimony about Fusion GPS working as advocates for corrupt Russian and Venezuelan officials, as well as hiding its work for foreign entities from federal authorities. They’ve also been accused illegally working as an unregistered foreign agent. And they’re currently refusing to comply with federal subpoenas for information on their foreign clients…like the one mentioned above regarding payments to Russian officials for the bogus dossier.

Fusion GPS peddled the fake dossier to their pals in the media, but it was rejected – at least in the beginning- by anti-Trump media outlets like the New York Times, the Washington Post, Yahoo News, The New Yorker, and CNN because it was so obviously fake. But it remained hovering over the newsrooms, with reporters running themselves ragged trying to confirm it.

The ball actually started rolling after James Clapper, Obama’s Director of National Intelligence told FBI head James Comey to brief President Trump on the dossier. After which, the story of the meeting was leaked to CNN, who published it. The meeting was an obvious set up, designed to give this garbage legitimacy. And once Buzzfeed released the text of the dossier, it became a part of the Trump/Russia collusion meme and shaped coverage at all these outlets.

Never have the American people been served so poorly by the press.

Let’s also recap that while Fusion GPS’s media pals were initially cautious above using the bogus dossier, the FBI and almost certainly their boss, Loretta Lynch used it as an excuse to collect intel on an opposing party’s campaign during an election year.

Now let’s briefly connect this with the Uranium One scandal.

During Mrs. Clinton term as Secretary of State in 2010, certain Canadian investors working on behalf of the Russian government wanted to acquire ownership of certain assets amounting to one fifth of U.S. uranium production. They were represented by the Podesta Group, who lobbied Washington for them.

Since this involved strategic materials, it needed oversight and a green light from Hillary Clinton’s State Department. That green light was received…after these same investors ‘donated’ $148 million dollars to the Clinton Foundation and arranged for Bill Clinton to receive $500,000 for a speech in Russia, more than double his usual fee. There are also some indications a donation to the Clinton Library was involved as well.

As the Hill revealed recently, the FBI had uncovered a bribery plot involving the Russians and uranium transactions in violation of the Foreign Corrupt Practices Act. They had substantial evidence, including eyewitnesses. The investigation also revealed that the deal involving the Clintons was part of the illegal bribery scam. Yet someone ordered the FBI not to reveal the details of their investigation or even to disclose it to Congress. Essentially, things were stonewalled fo four more years,until 2015, after Obama’s re-election. So the deal went through, even though the Obama Administration was fully aware of what the FBI had uncovered.

Oh, and the head of the FBI when this was going on? None other than Robert Mueller. Who is now special prosecutor investigating President Trump for Russia collusion! The irony is monstrous.

Either Mueller quashed the investigation himself or was ordered to do it by Obama’s Attorney General, Eric Holder. Mueller has some serious questions to answer, and no business investigating anyone else for collusion, especially with Russia.

Speaking of irony, it seems that everyone mouthing the Democrat’s lie about Trump’s collusion with Russia was – wait for it – colluding with Russia!

President Trump should wait a short while to allow this fact to become common knowledge, and then insist Robert Mueller recuse himself and end the open ended witch hunt that’s gone on a yuear without any evidence connecting President Trump with any Russia collusion. If Mueller refuses, Trump should fire him and tell the American people exactly why. And the president should order Jeff Sessions to appoint a special prosecutor to pursue a case against the guilty parties involved in these illegal acts.

I actually like our attorney general in many respects, but if Jeff Sessions can’t bring himself to do this, he needs to resign.

Why The ‘Indictment’ Has Me Laughing Out Loud

After two years and billions of dollars, we have the ‘indictment’ the Democrats and their trained seals in the media have been waiting for all these months. And here it is, solemnly being read by  Assistant AG Rod Rothenstein with all the pretentious faux drama he can muster up. I [Read More]