Ah yes, fake news, the latest gambit by the Left to marginalize and ban everything as ‘fake’ except for the Leftist propaganda their trained seals in the media put out.

The latest example is yet another attempt to rationalize their losing an election they thought they had in the bag, and of course, Hillary Clinton, the Democrats and their media presstitutes have latched on to it desperately. Of all people, Cenk Uyger, host of the ultra Left Young Turks show gets it exactly right:

Oh, and Mrs. Clinton? Speaking of fake news, no it wasn’t a riot over a video that got the four brave men you left to die in Benghazi killed.

In the latest use of this tactic, fake new promulgated by the Left’s media sycophants, President Barack Hussein Obama ordered a quickie review by the CIA, who came to the conclusion from ‘sources’ that it was Russia who hacked the DNC e-mails and caused poor Mrs. Clinton to go down in defeat.

Let’s examine this from several angles.

First of all, Julian Assange, who ought to know, has been adamant that the Russians were not the source of the DNC e-mails. And at this point, he has nothing to gain by lying about it. Assange has already done two interviews on who what and when these hacks took place. 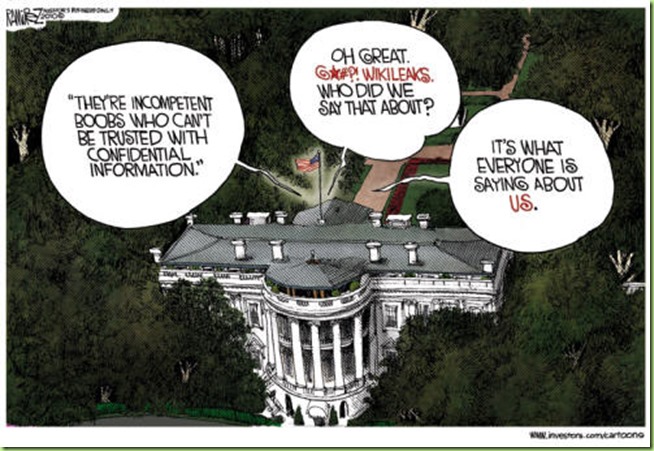 Second, no matter what the sources, were the e-mails fake? Did Vladimir Putin instruct the DNC to send e-mails revealing what corrupt, double dealing prog-facists they were? Did he tell them they had to detail how they rigged the primaries so only Hillary could win? Or to reveal their collaboration with their media allies, who sent articles to the campaign for their approval before running them? Did Putin tell them to take Donna Brazile  at CNN up on her offer to feed Hillary debate questions?

None of the players, not even serial liar John Podesta had the nerve to say these e-mails were fake…the most anyone said to their sympathetic media interlocutors is that they were ‘unverified,’ which is hilarious considering that everything else matched up and DNC head Debbie Wasserman-Schultz had to end up ‘resigning’ over them.

Another point worth noting is how many of these e-mails likely wound up on Hillary’s illegal unprotected server or Huma Abedin’s unprotected laptop she shared with her estranged husband Anthony Weiner, a number of which Hillary thought she deleted.  Did the Russians or whoever actually hacked into their e-mails somehow make  Mrs. Clinton and her chief aide break the Official Records Act by doing that?

And finally, lets look at the source of all this, John Brenner’s CIA.

(read more…it’s worth it)

Roundup; Debate Reactions The Morning After

October 10, 2016 JoshuaPundit Donald Trump Comments Off on Roundup; Debate Reactions The Morning After

The media are doing their very best to spin last night’s debate, even cooking the polls. But anyone who watched the debate knows that Donald Trump won a stunning and unexpected victory. The nearest thing I can compare this to is Richard Nixon’s famous Checkers speech, when he ran as [Read More]

Behind The Smoke And Mirrors -The New Clinton Email Scandal Explained

October 31, 2016 JoshuaPundit Politics Comments Off on Behind The Smoke And Mirrors -The New Clinton Email Scandal Explained

“Oh, what a tangled web we weave, when first we practice to deceive! “ – Sir Walter Scott The latest bombshell to hit this already explosive campaign season is an announcement by FBI director James Comey that the FBI has opened up a new investigation into the Clinton e-mail scandal…and [Read More]