Since March 30th, much of the world’s press and a chunk of the so-called ‘international community’ has been focusing on a series of what can only be called violent riots emanating from Gaza against Israel’s border.

Of course the media refers to them as protests, and the rioters as protestors and the UN as well as the usual channels refer to what has happened as ‘war crimes.’ So as a beginning, it’s perhaps helpful to describe these so-called protests and let the reader judge.

Israel understandably has a border fence with Gaza, a precaution against the numerous terrorist attacks on Israeli civilians by Hamas and Iranian proxy Islamic Jihad that have occurred in the past. The protests weren’t composed of people carrying signs and making a few speeches. They were mob attacks on Israel’s border, specifically on points Hamas had advised the mob were vulnerable. The mobs attacked the fence directly with Molotov cocktails, small arms fire, axes, wire cutters, explosives and knives. They used women and children as human shields, and had support from Hamas missiles and mortar shells. In other words, this was an attack, an act of war carried out against a sovereign nation. 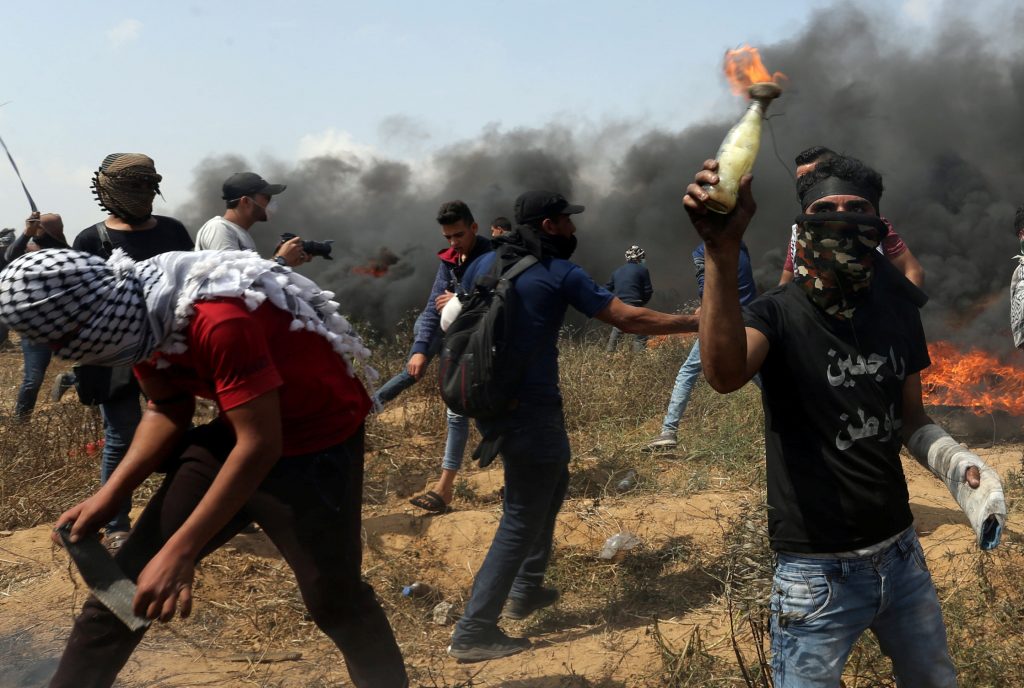 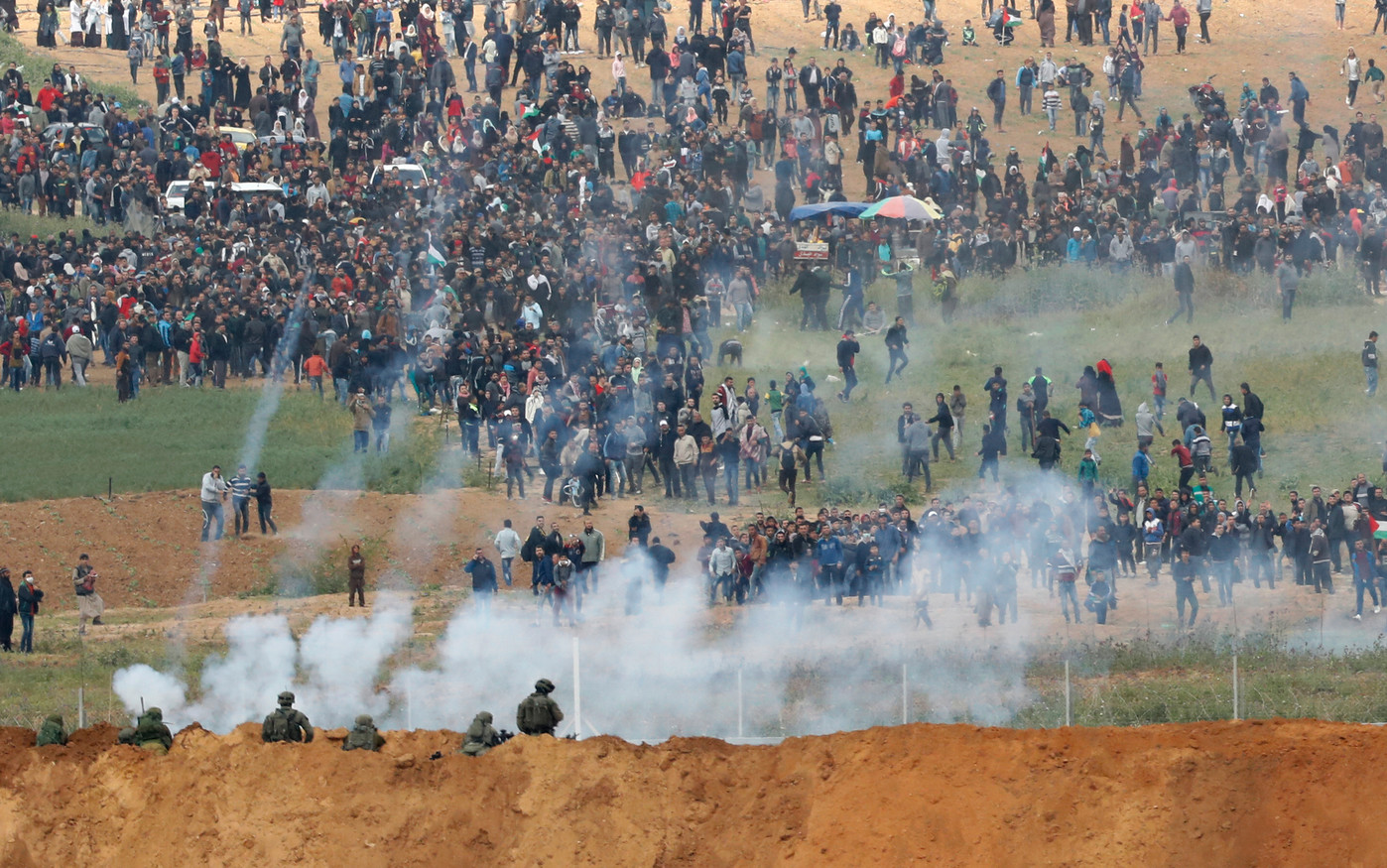 The IDF responded the way any country’s military would faced by this attack on their borders. After warnings to the mob in Arabic not to approach the border fence and tear gas didn’t stop them, the IDF soldiers opened fire when the mob charged the fence in response. It is a testimony to the cool heads, marksmanship and professionalism of the Tzahal that there were so few casualties, and that even Hamas admits almost all of them were Hamas or Islamic Jihad members. If a group of Jewish women and children had approached Gaza with an actual protest asking Hamas to stop firing missiles and mortar rounds at Israeli towns, does anyone doubt Hamas would have killed every one of them and celebrated afterwards?

Hamas’s Leader Ismail Haniyeh has made it clear that the riots and assaults of the fence will continue ‘until Jerusalem is liberated.’ And true to his command, the riots have continued, usually of Fridays after the imams have had a chance to stir up the mobs.

Another assault has been launched from the air. Incendiary kites, balloons and even inflated condoms have been launched towards Israel, resulting in fires that have already destroyed hundreds of dunams of Israeli land. One balloon containing an explosive device and a booby trapped detonator attached to the string was launched to be landed near an Israeli kindergarten only a half hour before the children were scheduled to arrive for class. Here’s what it looked like:

The leftist press reacted as expected. The AP, for instance in an article I won’t bother to link to had a whole sob story about how there’s such limited electricity nowadays and that it was making medical procedures like tending the wounds of would-be jihadis so difficult. Of course, what this Hamas PR piece didn’t mention is that the electricity in Gaza is so limited because a Hamas missile accidentally hit one of the Israeli towers that provides electricity to Hamasistan. And to add to the smell of what the AP and others are peddling, the Israelis aren’t able to make repairs because of the danger to the Israeli repair crew.

The UN also played its traditional role. An extremely biased UNSC resolution damning Israel for ‘war crimes’ was unable to pass thanks to a U.S. veto, but the same resolution passed in the General Assembly, 120-8, with 45 abstentions. About half of the EU voted for the resolution, including Spain, France and Belgium, with Switzerland, New Zealand, Iceland and Norway also voting in favor. The UK and Germany abstained. Of the major U.S. allies, only the Australians had the guts and decency to vote against this travesty openly…Advance Australia Fair indeed.

An amendment advanced by U.S Ambassador Nikki Haley condemning Hamas actually passed by a majority, but was disallowed by General Assembly president Miroslav Lajcak. While the resolution has the legal force of a stale piece of take out pizza, the fact that the UN was willing to vote to not condemn a clear aggressor against a democracy, and to actually vote in favor of establishing ‘an international protection force for the occupied Palestinians’ tells us quite a bit of what the UN has become. As Israeli Ambassador Danny Danon put it, if the UN approved the Palestinian resolution, “it will have signed in writing its unequivocal support for terrorism against Israel.”

“Let us not pretend,” Danon said. “If ISIS were to attack Stockholm tomorrow, ISIS would be held responsible for the attack. If al-Qaeda assaulted Paris, the UN would issue the strongest condemnation of al-Qaeda.”

“Only when Hamas attacks Israel does the UN seek to blame Israel.”

Well they did approve it, and a large part of the UN does approve terrorist attacks on Israel. And they have for a very long time.

So, how to fix this sorry situation?

Obviously the Israelis cannot depend on any cooperation at the UN. Nor can they depend on Hamas to stop attacking them or trust any negotiations Hamas makes with them. The latest laugher was Hamas’s offer for ‘comprehensive negotiation.’ You know what Hamas proposed? They will return the remains of two Israeli servicemen,Hadar Goldin and Oron Shaul they’ve held since the 2014 Operation Protective Edge. And they will return two kidnapped Israeli civilians, Avera Mengistu and Hisham al-Sayed, prisoners who the Red Cross has not even been permitted to visit.

What do they want in exchange? Oh, just to build a seaport and an airport. When you realize the Iran has now joined Turkey as Hamas’s paymasters, it’s easy to figure out they don’t exactly want these things for the tourist trade, but to fly and import weapons and missiles. The Iranians are particularly noted for using civilian airplanes for this purpose. And these attacks on Israel’s border are largely at Iran’s request, to open up another front against Israel and distract from Iranian attempts to militarize Syria.

And no mention of an actual peace treaty, of course. Israel is never going to be able to negotiate anything like that with people who would use a pretty, kid friendly balloon as a booby trap in hopes of murdering  Jewish children.

What Israel has done to date since the Hamas takeover is to wall Gaza off, destroy the terrorist tunnels into Israel and do their best not to allow Iranian heavy weapons to get into Hamas’s hands. Whenever the missile firings and mortar shelling get too intense, Israel engages in  what they refer to as ‘mowing the grass’ to take out as many Hamas military assets as possible and calm things down until the next time. Followed, of course by the usual media and UN hysterics,

This strategy actually helps Hamas, who care very little about the people they rule or about peace with Israel.It has become, essentially a war of attrition which favors Hamas.

I have a different solution, and it’s one I would implement if it were my decision to make.

Wars are won (or lost) when certain things occur. To end a war or the active threat of war, one side occupies enemy territory and subdues it while protecting its own. Or  one side simply destroys an enemy’s capacity to wage war and forces them to seek terms of surrender and peaceful coexistence.

Of course, not all wars are decisively won or lost, but that is how a war in which one side is victorious ends.

My proposal is that Israel treat this like the war that it is and do what’s necessary to end it. It would not be without cost, but is entirely possible. And certainly an improvement on the status quo.

First, I would inform the civilian population to leave to avoid undue hardship. Then, I would send the IDF over the borders, after announcing publicly to Hamas and the world that any hospitals, mosques, civilian dwellings or schools from which any missiles were fired would be considered  legitimate military targets and dealt with accordingly. After all, the UN is going to condemn anything Israel does anyway, so it makes sense to deal with this Hamas tactic properly, once and for all.

I would then shut off all electricity and water to Gaza. which is now provided by Israel. Men have survived for centuries without electricity, but never for very long without water. The IDF could simply dig in and besiege Gaza City and Khan Yunis while the air force and attack choppers took out the missile launching sites and anything else that was appropriate. Hamas would eventually have to come out to either face the IDF’s firepower or to surrender.

After vetting them, the Israelis could definitely let a large part of the civilian population flee to Egyptian Sinai and then close off the Rafah crossing while turning over the Hamas small fry that were captured directly to Egypt’s Mukhabarat for a nice, leisurely interrogation. Getting their hands on bunch of Hamas operatives is something I’m sure Egypt’s al-Sisi would appreciate, especially when they spilled the beans about their fellow Muslim Brotherhood comrades in Egypt. The Hamas leaders could be subjected to a nice sit down with the Shin Bet, who are noted for their hospitality and encouragement of interesting conversation in these situations. Most of the Hamas leaders could probably be turned over to the Egyptians afterwards. Sharing is caring, nachon?

At that point, the Israelis would control previously hostile territory, eliminating an Iran proxy and a probable war front. Mahmoud Abbas would certainly want it turned over to him and the corrupt PLO, but Israel could and should refuse outright, and annex the Gaza Strip. They could then start doing what Israelis seem to do so well, rebuilding and improving the mess, exactly what they did to Judea and Samaria after the Six Day War. There would be no more missiles from Gaza, and not much of a Hamas threat. Perhaps even some of the inhabitants from Gush Katif could resettle there, along with other Israelis. It could even become a haven for Arab and Middle East Christians and Yazedis, whose young men would become as good soldiers defending their new country as the Druse, Bedouin and Arab Christians have been. South Africa’s Jews, who are increasingly under threat from the government of their native land might be another good source of population.

And Gaza itself? It would become what it could easily have been with different rulers, a second Singapore rife with trade and prosperity. While Egypt might whine a bit about a large part of Gaza’s population settling in Sinai, the increased trade between Israel and Egypt, which Egypt badly needs would be a consolation. Egypt could also probably apply to the UN or elsewhere to get some support money for these new refugees.

The UN and the usual media clowns would go insane. But they do that anyway whenever Israel takes the least step to defend itself. They would never recognize Israel’s annexation of Gaza, but so what? They don’t even recognize Jerusalem as Israel’s capitol, or Israel’s annexation of the Golan Heights, which is 50 years old. Some European nations might not accept products from Gaza, but there would be plenty of trade with Asia, Eastern Europe and the Arab world to make up the slack.

Wars end with victory. It’s time this one did.

Honestly! Every time you think Leftists can’t take their socialist, identity politics, intersectional, American-hating madness any further . . . they do.