According to The Daily Kos, the guide is a “defensive approach purely focused on stopping Trump from implementing an agenda built on racism, authoritarianism, and corruption” intended to gin up the masses for the 2018 and 2020 elections is nothing short of guerilla warfare against the president, his administration and the GOP.

Who is Indivisible? Page 2 of the guide states:

“We: Are former progressive congressional staffers who saw the Tea Party beat back President Obama’s agenda.

We: See the enthusiasm to fight the Trump agenda and want to share insider info on how best to influence Congress to do that.

You: Want to do your part to beat back the Trump agenda, and understand that will require more than calls and petitions.”

The recommendations in the guide are starting points or so they say for the already unhinged.

“You: Should use this guide, share it, amend it, make it your own, and get to work.”

Its purpose as claimed is to “reveal best practices for making Congress listen.”

Notice the deliberate play on words, intended to deceive starting with the name of the organization “Indivisible” taken from the Pledge of Allegiance by the left who take a knee to the American flag and Pledge of Allegiance and “making Congress listen” a play on the phrase “make DC listen” coined by Senator Ted Cruz and used by the Tea Party which is an admission of that which Progressives have denied for years and that is the success of the Tea Party[i].

The Tea Party’s success was a disaster for President Obama’s agenda and for our country, but that success should give us hope today. It proved the power that local, defensive organizing can have.

With this in mind, we coordinated a group of former congressional staffers and advocates to develop “Indivisible: A Practical Guide for Resisting the Trump Agenda.” It takes a few pages from the Tea Party playbook, focusing on its strategic choices and tactics, while dispensing with its viciousness. It’s the Tea Party inverted: locally driven advocacy built on inclusion, fairness and respect. It’s playing defense, not to obstruct, but to protect.

The guide is informed by a simple principle: Federal policy change in the next four years doesn’t depend on Mr. Trump but on whether our representatives support or oppose him. And through local pressure, we have the power to shape what they consider possible….

“while dispensing with its viciousness…” The Tea Party, vicious? Really? Like a rabid fascist jackass shouting “love trumps hate” while bashing in a Trump supporters’ head or car windows. Indivisible, Organizing for Action and all other community organizations involved in the war against the Republic is the exact opposite of the Tea Party. Moving on.

According to its website, Indivisible “energizes and informs Americans about government’s potential and enlists them to imagine and create the government we need for all to have a safe, healthy, just and prosperous future.”

Not mentioned in the guide but very much involved is Robert Reich, who has created a series of propaganda videos such as 100 Days Resistance, Trump’s Infrastructure Scam, Trump Syndromes with several before, in between and the final two videos Tyrant and Town Hall Resistance Guide. Sedition!

The website instructs useful idiots on how to commandeer a town hall meeting, stalk track down and corner stalk Republicans. Especially since many Republicans have opted not to hold town halls during their break next week. Others will send their aides.

The purpose is to bully and distract Republican bureaucrats (such as GOP leadership in the House and the Senate the primary targets) away from their agenda which as we can see from the White House leaks had in some instances slowed the President down.

As you can see by the hysterics that Progressive leadership in both Houses, their pundits, and media machine are employing this tactic. They must have enjoyed President Trump’s press conference Thursday more than they’re letting on. It was at least an hour and a half that part of Obama’s legacy was not being reversed.

Below are some pages that caught my attention. 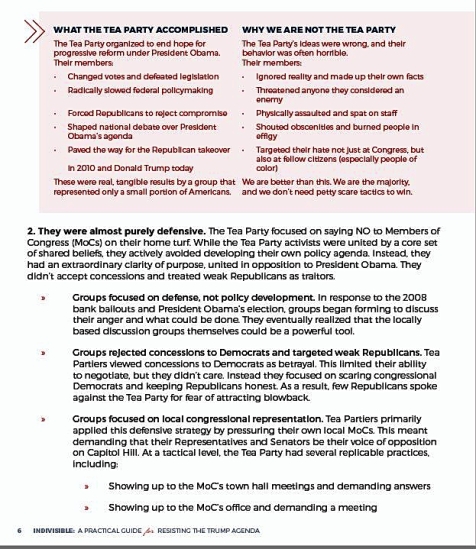 “For the next two years, Donald Trump and congressional Republicans will control the federal government. But they will depend on just about every MoC to actually get laws passed. And those MoCs care much more about getting reelected than they care about any specific issue. By adopting a defensive strategy that pressures MoCs, we can achieve the following goals:

Stall the Trump agenda by forcing them to redirect energy away from their priorities. Congressional offices have limited time and limited people. A day that they spend worrying about you is a day that they’re not ending Medicare, privatizing public schools, or preparing a Muslim registry….” 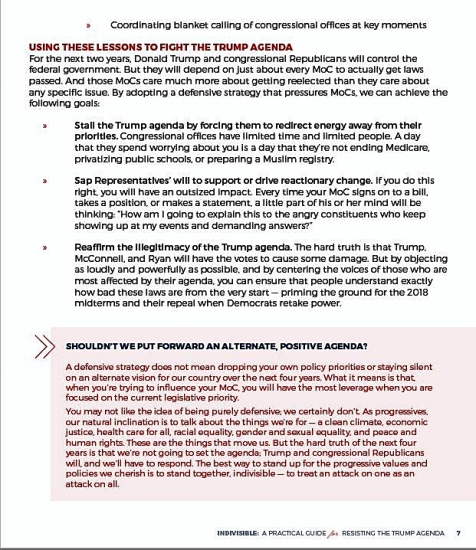 “We do not yet know how Trump supporters will respond to organized shows of opposition, but we have seen enough to be very concerned that minorities will be targeted or singled out. Plan your actions to ensure that no one is asked to take on a role that they are not comfortable with — especially those roles that call for semi-confrontational behavior — and be mindful of the fact that not everyone is facing an equal level of threat. Members of your group who enjoy more privilege should think carefully about how they can ensure that they are using their privilege to support other members of the group. If you are concerned about potential law enforcement intimidation, consider downloading your state’s version of the ACLU Mobile Justice app to ensure that any intimidating behavior is captured on film. Please familiarize yourself with your state and local laws that govern recording, along with any applicable Senate or House rules, prior to recording. These laws and rules vary substantially from jurisdiction to jurisdiction. 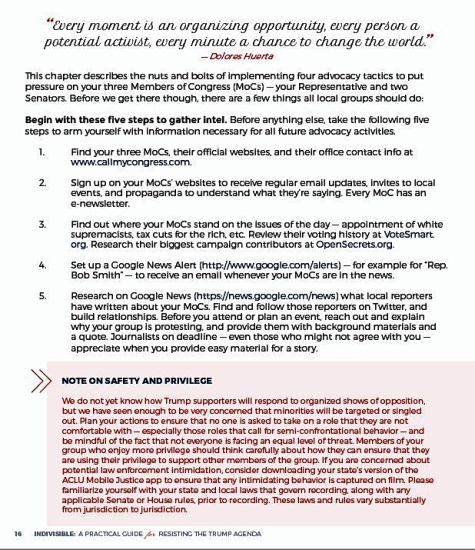 Pages 17 – 26 are about infiltrating, obstruction, alerting the media and recording of the town hall [my emphasis], district offices and public events, actions of which we have witnessed over the past eight years. See manifest in its entirety below.

READ  Yuuuuge crowd lining up for the Trump rally in Toledo, Ohio
View this document on Scribd

“We’ve got to have a civilian national security force that’s just as powerful, just as strong, just as well-funded. We need to use technology to connect people to service. We’ll expand USA Freedom Corps to create online networks where American can browse opportunities to volunteer. You’ll be able to search by category, time commitment and skill sets. You’ll be able to rate service opportunities, build service networks, and create your own service pages to track your hours and activities.

This will empower more Americans to craft their own service agenda and make their own change from the bottom up.”

Who would ever have imagined a former sitting American president plotting the destruction and termination of the presidency of the recently inaugurated president.

Who would have imagined former Congressional staffers under the former sitting president, the media, elected and non-elected bureaucrats colluding to delegitimize, impeach, thwart the agenda of and stage events with the aid of still federally employed staffers that would lead to prematurely terminating the tenure of a sitting president.

Staffers of whom are themselves strategizing to circumvent the president’s agenda? Suggested reading: Republicans want to investigate EPA employees for using Signal to strategize how to thwart Republicans.

I hope Scott Pruitt who has just been confirmed to run the EPA has the stomach for what’s to come.

What is playing out here is not a novel but Barack Obama’s army. Obama, Congressional staffers, the Progressive leadership, goons like the mental midget Robert Reich and media propagandists have given their blessings to acts of insubordination by federal employees, riots, assaults on Americans, hateful rhetoric all of which is threat to the Republic and the President of the United States.

While this is Obama’s legacy which must be denied, at what point is the line crossed into treason? Sedition?

When does it become necessary to find the head of the snake and cut it off meaning (better clarify that), start bringing people up on charges and throw them in prison?

Will it come to that?

[i] These organizations have nothing in common with Conservatives and fleeing Democrats who last year voted Republicans into all three branches of government. What the left will never acknowledge is that we had help from a higher authority.

Will there be “shy” Trump supporters voting this coming November?

July 30, 2018 Bookworm Donald Trump, Elections Comments Off on Will there be “shy” Trump supporters voting this coming November?

I have three reasons for thinking that conservatives will turn out at the polls and support Trump’s agenda this Fall, despite that alleged “Blue Wave.” The doom and gloomers, including the relentless NeverTrumpers, are saying that there’s a good chance that the Democrats will retake the House, because who doesn’t [Read More]

THE DAY THE MUSIC DIED; THE LOSS OF INNOCENCE ON AMERICA’S COLLEGE CAMPUSES

April 15, 2019 Puma ByDesign Culture Comments Off on THE DAY THE MUSIC DIED; THE LOSS OF INNOCENCE ON AMERICA’S COLLEGE CAMPUSES

Vassar Bushmills The lines of a ditty from the early 1960s suddenly popped into my head, recently. It was late lest September, as well as I can remember While strolling though the park in tipsy pride Not a word did I utter, as I lay down in the gutter And [Read More]

I realized the other day that, in a very visceral way, I’m actually looking forward to a Trump presidency. This realization comes as a surprise because (a) I still don’t like Trump’s style and (b) Republican presidents never follow through on the change they promise. And yet. . . . [Read More]