Faced with having her government collapse, Angela Merkel surrendered entirely to the demands of her interior minister, Horst Seehofer. Here’s the agreement, in English and then in German:

In order to better regulate, control and prevent secondary migration, we come to this agreement:

1. We agree to a new border regime at the German-Austrian border, which ensures that asylum seekers whose asylum procedures are the responsibility of other EU countries, will be refused entry.

2. To do so, we will establish transit centers, from which the asylum seekers will be directly sent back to the responsible countries (refusing entry on the basis of the legal implication of non-entry). We do not want to act in an uncoordinated fashion, but come to administrative agreements, or establish communication, with the countries concerned.

3. In those cases where countries refuse administrative agreements, the rejection at the German-Austrian border will be on the basis of an agreement with the Republic of Austria. 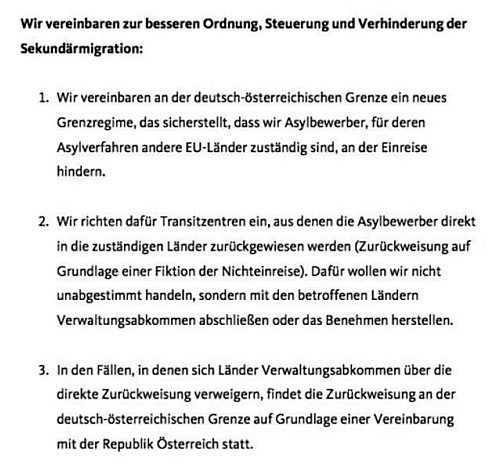 Like I said, complete capitulation. Hort Seehofer had the best weapon possible in this kind of negotiation, the willingness to walk away from the table and take his CSU party with him. Needless to say, he was attacked ferociously by the Leftist German press, but he stood his ground, a man with courage and conviction.

Merkel’s facesaver in this agreement is one single sentence: “We do not want to act in an uncoordinated fashion, but come to administrative agreements, or establish communication, with the countries concerned.”

Since the ‘countries concerned’ have already said no to more Muslim migrants, that question is essentially settled anyway, nicht wahr? But it looks nice on paper.

The true issue here was whether Germany actually has national borders and can refuse people entry or not. Merkel wanted to have a Germany with no borders and no real nationality, just a province in a non-democratic EUSSR.

This is a great day for both Germany and Europe, a victory for the German people’s right to self-determination, and a major setback for the forces of multi-culti and slavery.

Don’t be surprised if Seehofer ends up as the next German chancellor.

A Newsreel Cameraman’s View of D-Day

This footage of the events leading up to and around D-Day was a lucky find thanks to fellow blogger and WWII veteran, Mr. G. P. Cox of Pacific Paratrooper. The National Archives Unwritten Record Blog by Audrey Amidon Jack Lieb went to Europe in 1943 with two movie cameras: He [Read More]

A fed up Germany offers €3000 to migrants to return home.

December 4, 2017 Puma ByDesign Culture, Islam, World Comments Off on A fed up Germany offers €3000 to migrants to return home.

Long story short, Germany is willing to pay Muslim invaders who failed to receive asylum €3,000 if they leave the country and return home to their countries of origin by March 2018. Is this way of Germany admitting that Angela Merkel’s open border policies to Muslim migrants from Africa, the [Read More]

Angela Merkel is in deep trouble, and has a very good chance of being ousted from power. And Germany itself may be making a long overdue change for the better, as the German people finally tire of the Muslim migrants and the rapes, the murders, the crime and the huge [Read More]