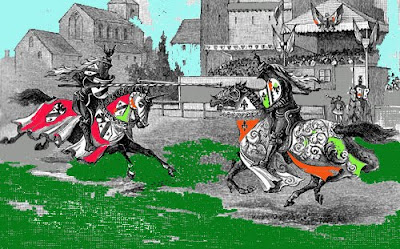 Welcome to this week’s Head To Head, where the issues of the day are hotly debated by some of the sharpest minds in the blogosphere.

This week’s Head to Head takes on the Big Question in DC-Land today…Which is a better course politically for conservatives – to allow a government shutdown if Democrats refuse to embrace massive spending cuts or to compromise for a lesser amount of cuts in order to keep the government running?”

Today’s match up pits the Council’s own The Noisy Room against Council alumnus Soccer Dad…and away we go!

The Noisy Room: “Cut it or shut it!” has become the rallying cry of the Tea Party and rightly so. As our US national debt creeps towards $14.5 trillion, with estimates ranging to over $76 trillion in unfunded liabilities, the visage of a painful remedy to our debt ailment looms over the American landscape. Shutting down the government will not be the end of the world, just a necessary inconvenience and essential services will be kept going according to Boehner. Time to sweep out the temple and close the golden doors until some small smidgen of fiscal sanity returns to Capitol Hill. It’s the fiscally responsible thing to do.

I believe the majority of Americans favor such a shutdown. Time to take away the government credit cards and look at our spending in the harsh light of day. It’s ridiculous for the Democrats to balk at cutting any debt – in fact Obama wants to ADD $26.3 trillion more to the debt. And the spending goes on and on and on… Why, it’s almost like the left wants to break the back of America financially. How very Cloward and Piven of them. No kiddies, someone has to have a spine and play the adult and say no to the greed, the entitlements, the ruse that says there is plenty of money, cheered by those who evidently can’t balance a checkbook. There is only so much money to pay so much debt, unless you keep printing, digitizing money and monetizing the debt. And we all know how well that worked for the Germans, right?

The Democrats are threatening extortion if they don’t get to continue on their merry, suicidal, spending spree. They won’t even tolerate a $60 billion dollar cut, which is ludricous. They say they will hold up ATF approvals of firearms and other tasty bits of threat du jour, as if that will sway the rednecks of America into blessing their progressive monetary agenda. Wrong. The majority of Americans have something that most politicians don’t recognize, because they don’t have it – a spine. We’ll deal and we’ll swallow the pain so our children won’t have to endure monetary suffering and enslavement to the elites. We took the pain in the early 1900s and came out stronger for it – we’ll take it today and clean our political house while it is closed to the progressives in our midst.

Paul Ryan is proposing $6 trillion in cuts over 10 years. That’s a good start. But much more will have to be done. Slash the debt, shutdown the government. Do not compromise with the left. You do not plug a breach in the hull of your ship with a pacifier. If you do, you still sink, you still drown. I say fight radicals with radical measures. Shut it down and bring it. This is our line in the sand.

Soccer Dad:Let me start by acknowledging that I am part of the problem not part of the solution. I am a federal employee. This also means that to argue for a shutdown is arguing against my own narrow interests.

However I think there is a very strong reason for Republicans to compromise and avoid a shutdown over the budget. The current budget battle is for the 2011 fiscal year. Democrats having abdicated their responsibility by not passing a budget in time for the current fiscal year, which started last October 1, when they still controlled both houses, are seeking a showdown over the current budget. Their hope is to put the Republicans on the defensive politically, and to avoid the hard choices the nations must make to get spending under control.

I realize that with the previous shutdown, public employees were perceived in a more positive light than they are now, so perhaps a shutdown won’t hurt the Republicans as badly. But the bigger budget battle is for 2012. Representative Paul Ryan has proposed a budget that will start to rein in federal spending. It may not be perfect but it’s an excellent start to reverse the excesses of the past two years. For now the 2011 is a sideshow and as long a Republicans can get reduced spending they should take a compromise deal. The negative publicity of a government shutdown will make passage of of the “Path to Prosperity” that much more difficult.

The Noisy Room: As my esteemed colleague has correctly pointed out, Ryan’s proposed budget is an excellent “start.” But that is all it is and there is a strong argument for the cuts being even more severe and over a much shorter period than 10 years. I realize that it is true that the Democrats did not pass their budget and are trying with all their progressive might to lay this at the feet of Republicans, specifically the Tea Party. But we know the game is afoot. As Mike Pence so eloquently put it: “If the only alternative is continuing spending at unsustainable levels, then I say shut it down.”

This is not just a fiscal issue, although that in itself is life and death for America now. This is a moral issue that stretches across time and into the lives of our children and grandchildren. We do not want to hear the whispered repercussions from the future that for political expediency we compromised with the left and sold our collective souls for a few pieces of silver and comfort.

As we debate, Obama has laid the blame squarely on the Conservatives and then departed in an obvious display that he wants a government shutdown so he can claim the high ground. Our own CBO does not see a way for our economy to continue to exist on this path past 2037. Digest that for a moment – no more America – period… Ryan says if we keep the spending up our debt will reach 800% of GDP.

I say we don’t compromise. We do the right thing come hell or high taxes. We are playing for all the marbles kiddies and there is a Marxist bully rampaging the playground. J. McCauley had it right: “It is the season for the Perfect Storm, and it is starting to rain.” We either stand for what has made America great, take our lumps and do the right thing or we fall as a nation. If we don’t “cut it or shut it,” we will absolutely fall as a country, but we will have no way to ever recover. Compromise and wanting to win elections got us into this mess, principle and American backbone will get us out of it.

One last quote from Rush Limbaugh: “If there’s to be a future, if there is to be a United States as we’ve known it, we’ve gotta get this budget deficit under control. The two alternatives to do that are cut the level of spending or raise taxes to 88%. Take your pick.”

Soccer Dad: Even as a start, Ryan’s proposed budget is the only comprehensive alternative out there. The question remains, what’s the best way to get to Rep. Ryan’s plan? If it need adjusting in the future, so be it.

A government shutdown would weaken the Republicans politically. Ace doesn’t think so:

We can safely assume that almost everyone blaming one or the other is that side’s partisans. The numbers are about right, 39% blame the GOP, 36% blame Obama. 17% say both. That’s pretty much the D/R/I breakdown.

Now, going forward, I’d expect those numbers to change a bit as independents began taking sides but there’s no very good reason to think they’d break against us.

I disagree. Public opinion broke against the Republicans in 1995, and I expect it will do so again. The MSM will not report that it was the Democrats who failed to come up with a budget when they had full control of the legislative and executive branches. Not being fully informed independents will be swayed by media reports of Republican intransigence and never hear of Democratic bad faith.

Right now we have a path to get government under control, a government shutdown will almost certainly put a pothole in that path.

What say you, readers?