There’s a fair amount of attempts among the usual suspects to present Islam as a religion of peace in defiance of all the evidence to the contrary. While there are quite a few Muslims who are peaceful and decent people, that would likely be the case no matter what faith they followed. But much of the religion itself is not at all peaceful or tolerant, and people see that every time Islam’s veil slips and it reveals that.

Davis, California is a small city in northern California just west of Sacramento, the state capitol. It has a well established Islamic center. The Islamic Center of Davis’s imam is one Ammar Shahin.

Last Friday,Imam Shahin called explicitly for the annihilation of Jews in his sermon. Since it was mostly in Arabic, he felt safe to communicate this kind of bigotry. Unfortunately for him, a video of his sermon slipped out and was translated into English by the Middle East Media Research Institute (MEMRI). These are brief excerpts of the entire two hour hate fest, but I assure you they are utterly representative of the whole.

What the Imam is referencing comes from the Hadiths, the Muslim scripture basically equivalent to the Christian Gospels, since they consist of Mohammed’s deeds and words as recorded by his most devout followers. This is what Mohammed told them:

From Sahih Muslim, Book 041, Number 6985: Abu Huraira reported Allah’s Messenger (may peace be upon him) as saying: “The last hour would not come unless the Muslims will fight against the Jews and the Muslims would kill them until the Jews would hide themselves behind a stone or a tree and a stone or a tree would say: Muslim, or the servant of Allah, there is a Jew behind me; come and kill him; but the tree Gharqad would not say, for it is the tree of the Jews.”

And from Sahih Bukhari, Volume 4, Book 52, Number 177: Narrated Abu Huraira: Allah’s Apostle said, “The Hour will not be established until you fight with the Jews, and the stone behind which a Jew will be hiding will say. “O Muslim! There is a Jew hiding behind me, so kill him.”

While many Muslims are NOT antisemitic, a large number are, simply because when you read the Qur’an and a number of the Hadiths, as I have, you find that it is rotten with hatred of ‘unbelievers’ and especially of Jews.

The reason for that is that when Mohammed fled Mecca (the Hejira) he went to Medina, a city established by Jews and mostly populated by them. They allowed him refuge but weren’t interested in his new religion. That was when Mohammed ‘discovered’ new verses for the Qur’an promising plunder, sex slaves and paradise for warring against ‘infidels.’

Mohammed’s new Qur’an, known to Islamic scholars as the Medina Qur’an was quite successful in increasing his adherents among the Arabs. And his accounts to the folks back in Mecca were instrumental in his recruiting an army. Mohammed attacked the Jews who had given him refuge, plundered their wealth (a substantial part of the Qur’an concerns exactly how to distribute sex slaves and booty) massacred all the males after they had surrendered and took his pick of the sex slaves, one of whom he raped just after she had seen her husband and her father beheaded in front of her.

The Hadiths are the Muslim equivalent of the Christian gospels in that they are Mohammed’s deeds and words as reported by his closest followers. The Hadith in question appears in several of these accounts and has been formally authenticated by all four major Muslim fiqhs.  And it is is also part of the Martyr’s Oath every Hamas members swears.

The mosque’s immediate response was fairly typical. It claimed the imam’s remarks were mistranslated, that MEMRI is a ‘right wing, pro Zionist group’ and that Israel is guilty of ‘war crimes’ like the ‘settlements’ so of course the Imam’s emotional sermon was understandable. And besides, the parts of Islamic scripture quoted were taken out of context, because as we all know, Islam is a religion of peace.

Aside from the fact that many Israelis speak Arabic fluently (Arabic is one of Israel’s official languages) MEMRI is known for its accurate translations. The problem the Davis Islamic Center and others have with MEMRI is that its translations area little too accurate. They don’t like it when Islam’s veil slips.

And if these are such poor translations and the quotes so out of context, why have so many Muslims been acting on them for over 1400 years? The death toll, according to some fairly conservative estimates could be as high as 200 million, all murdered to the tune of that ancient battle cry ‘Allahu Akbar’ and the Qur’anic Verse of the Sword…”Fight those who believe neither in Allah nor the Last Day, nor what has been forbidden by Allah and his messenger, nor acknowledge the religion of Truth, even if they are People of the Book, until they pay the tribute and have been humbled. – (Qur’an 9:2)

In other words, all non-Muslims are to have three options. To convert to Islam on pain of death, to become corpses or to pay a huge tax, jirzyah in money or in slaves. That’s what Mohammed told his followers before he died and that’s what many Muslims still regard as their operative mission on earth and act on it to one degree or another. Unlike most other religions, Islam does not play well with others or coexist with them willingly. It never has and for the most part, likely never will. It was never designed that way.

Why would the imam even use terms like this unless he was calling for the annihilation of Jews? And even a cursory search reveals that this is nothing unique. The imam is just one of many. For instance, there’s Sheikh Qaradawi, one of the most popular figures in the Muslim world whose sermons are broadcast over al-Jazeerah in Arabic on select channels. Is he also ‘quoting out of context?’ when he calls for a new holocaust against the Jews, praying to Allah that ‘this time, may it be at the hands of the Believers?”

And blaming it on  what’s happening at the Temple Mount right now? Here’s an excerpt from their official statement

“On July 21st, 2017, Imam Ammar Shahin gave a sermon at the ICD. The sermon was about the theological virtues of one of Islam’s holiest sites, Al-Aqsa Mosque. He also addressed the recent horrific events including the illegal closure, occupation, and attacks against Al-Aqsa Mosque, in addition to the killing and injuring of Muslim worshipers, including the wounding of the Imam of Al-Aqsa Mosque, and the prevention of worship and the call to prayer at the Mosque. Specifically, the Imam was referring to individuals that are contributing to this oppression.”

I’ll be discussing the Temple Mount in an upcoming article, but let me briefly unpack the outright falsehoods in that one paragraph:

First of all, the al-Aqsa mosque is not one of Islam’s holiest sites.’ Jerusalem and the Temple Mount are mentioned numerous times in the New Testament and the Hebrew scriptures. They aren’t mentioned once in the Qur’an or Hadiths. Until the late 1920’s the mosque stood in deep disrepair and was falling apart. It only became important once the Muslims decided it was necessary as a political weapon against eh Jews, and Hitler’s pal Haj Amin al-Husseini, the British appointed Grand Mufti of Jerusalem raised funds to renovate it, appointed an imam and instructed his followers to start worshiping there. Here he is shaking hand with another pal of his, Heinrich Himmler: 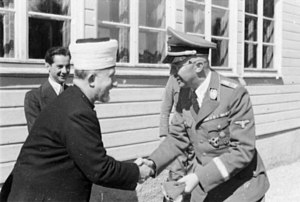 Fun fact: Muslims pray facing Mecca. When they prostrate themselves to pray at the al-Aqsa mosque, their rear ends  face what the Islamic Center of Davis calls ‘one of  Islam’s holiest sites.’

The ‘horrific events including the illegal closure, occupation, and attacks against Al-Aqsa Mosque, in addition to the killing and injuring of Muslim worshipers, including the wounding of the Imam of Al-Aqsa Mosque, and the prevention of worship and the call to prayer at the Mosque?’ Here’s what they’re actually referring to.

Two of the ‘worshipers’ smuggled firearms into the mosque itself and then murdered two Israeli police (both Arab Druse) in cold blood, literally shooting them in the back.Both of the killers were shot and killed in response, which led to  a violent riot by the other ‘worshipers’ who attacked the police with rocks, knives,bottle and sticks. The police had to actually charge into the mosque to defend themselves and end the riot.Afterwards, they searched the mosque and found a number of weapons inside, including knives, axes, firearms and ammo.  So they installed metal detectors, in common with the Vatican, the main Mosque in Mecca. There was no Israeli prevention of worship at al-Aksa mosque. They merely insisted that people attending services there go through the metal detectors for obvious reasons. It was the imam of the Mosque and the Jordanian waqf who administer the mosque who called for a boycott of al-Aqsa until the metal detectors were removed. And prayed in the streets, followed by more violent riots. And continued incitement to violence of course.

Oh, I see. Except that’s not what he said. He specifically mentioned the annihilation and murder of Jews at the hands of Muslims. Although I will certainly concede that he wants to bring his congregants back to that ol’ time religion, circa the 7th century no matter how he lies about it now.

The Blind Sheikh, the late Omar Abdel-Rahman, the man who masterminded th efirst World Trade Center bombing and a few other like minded ‘holy operations’ (his words, not mine) once said something that’s always stuck in  my mind…”There is only Islam and not Islam. There is nothing else.”

By saying that, he was merely being honest.  And unfortunately part of what Islam is consists of what Imam Shahim had to say, no matter what kind of taqiyyah spin he and the Islamic Center of Davis try to put on it.

I personally would not be at all surprised to find out that the Islamic Center of Davis was built with funds from overseas and financed by either the Islamic Society of North America (ISNA) or the North American Islamic Trust (NAIT). Both are Muslim Brotherhood front groups, and that sort of thing has gone on all over America, with these groups also in control of who the imams are. Is it any wonder that young Muslims become ‘radicalized’ and seek to carry out what they’re being fed by people like Imam Shahin?

We are going to have to decide one day soon how we’re going to deal with the inherent violence, misogyny and intolerance built into Islam. It is incompatible with a free society, and even a number of American Muslims who came to America to get away from the kind of society Islam has a tendency to create understand that.

Heated congressional races are yet another reason to curse open primaries….

October 5, 2016 Bookworm Elections Comments Off on Heated congressional races are yet another reason to curse open primaries….

I hate open primaries. In a post a few years ago, I explained why, and I’ll repeat myself here: The point of the primary system is to give citizens who are members of a specific political party the opportunity to pick that candidate who best represents their views. Then, in [Read More]