Angela Merkel is in deep trouble, and has a very good chance of being ousted from power. And Germany itself may be making a long overdue change for the better, as the German people finally tire of the Muslim migrants and the rapes, the murders, the crime and the huge financial cost most of them bring with them.

Even the Germans it seems, with their almost inbred preference for social order at almost all costs seem to have finally reached their limit. Even Germany’s pro Merkel Leftist press and what amounts to near censorship of opposing views aren’t hiding things anymore.

Mutti Merkel’s original plot involved saving Germany’s out-sized social welfare system. With the Germans no longer having children as they used to, she decided to open the gates to thousands of Muslim ‘asylum seekers’ and migrants. The majority were Muslim men between the late teens and mid-forties, which of course includes a lot of Muslim men who claimed to be children to gain asylum and benefits but were proven to be much older, usually in connection with various criminal trials and investigations.

Merkel’s idea was that these men would both increase Germany’s population by impregnating German women and would work in Germany’s industries, increasing the tax base.

Well, part of the plan worked, at least in theory. These Muslim migrants were quite happy to try and impregnate German women and girls, whether those women or girls were willing or not. And as in Britain, Sweden and other countries, the new migrants saw these infidel females as prey and treated them accordingly, to the point where over a third of Germany’s women admitted that they were actually afraid to go out at night in the most recent polls…this in what used to be one of the safest countries in Europe!

Even worse was the Merkel government’s response, which essentially was to make a few public statements and do absolutely nothing except to do their best to brand anyone opposed to these suicidal polices as ‘racist,’ something that worked well in Germany for some time because of its past. And to censor news of these events as much as possible. And insist that it was a minor problem that could be overcome with a little education. I won’t even bother to tell you how little those efforts worked. Unglaublich.

The new migrants, who were almost entirely unskilled also found out quickly that they had no real reason to work, because of the German government’s incredibly generous benefits they received. So much for the rest of the plan.And as more and more of them found out about the gravy train waiting for them, more and more of them surged into Germany. Since they have to have housing, German families are actually being moved out of their apartments and migrant encampments are being erected in German towns whether the populations wants them or not. As these towns and cities experience this sort of cultural enrichment, a number have simply refused to accept any more of it.

Think of the irony…instead of the Muslim migrants becoming tax slaves for the Germans, the exact reverse is happening!

And that’s not Merkel’s only problem. She also has a major scandal on her hands because a number of Germany’s asylum processing centers have been caught taking bribes to grant people asylum status for money. And then, there’s the problem of President Trump, who has not only raised tariffs on German goods. Infuriated by the refusal of Germany to stop empowering the hideous Iranian regime with trade that actually includes chemical weapons technology, the US president has doubled down and said there will be significant trade sanctions against any country importing Iranian oil.That means a trade war Germany can’t win, and the Germans know it.

Chemical weapons from Germany to Iran to be used to shoot poison gas at Israel and the Jews? Sounds like the bad old days, nicht wahr Frau RiechsKanzler?

President Trump’s new ambassador to Germany, Richard Grenell is also mentioned in the above linked article, which brings us to the matter at hand. You see, Grenell has formed bonds with Merkel’s new EU problems, the new, nationalist and anti-migrant governments in Austria and Italy both of which are outspoken Trump admirers. And with Merkel’s chief German political problem, German Interior Minister Horst Seehofer. 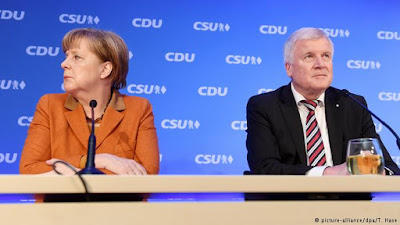 Seehofer is also the head of the the Christian Social Union (CSU), Bavarian sister-party to Merkel’s Christian Democratic Union (CDU) and a major coalition partner. You might recall that Merkel’s CDU needed months to be able to form a working coalition in order to govern and had to go to bed with the Socialists,FDP and Greens, an unwieldy partnership at best.

Seehofer is concerned because in the last election, a lot of CSU votes went to Alternative für Deutschland(AFD)instead, making the nationalist, anti-migrant party the third largest in Germany. And with another regional election coming up, he wants to staunch the bleeding. Bavaria, like most of Southern Germany is much more right leaning then say, Berlin. And AFD is polling even higher than it did when the last election was held.

This latest showdown between Merkel and Seehofer involves a dust up in the EU itself, because the Muslim migrants keep pouring in.With several EU members refusing to take any more, and in some cases haing always refused to take any at all, Merkel used Germany’s power in the EU to try and force compliance. An early attempt at an alliance with France’s President Macrom failed when his ideas were even more unrealistic then Merkel’s. Another idea, putting ‘asylum registration compounds’ in places like Libya at a cost to the EU of 20-30 billion euros annually failed because those countries refused to allow the compounds on their territory. Merkel even claimed at one point that ‘an EU deal has been made’ only to be contradicted by several EU leaders like Hungary’s Victor Orban that nothing like that had even been discussed,let alone agreed on.

Seehofer wants a stricter migration policy in all regards, but the specific disagreement was Seehoffer insistence that migrants who originally land in say, Greece or Spain and who had already been registered elsewhere cannot travel to Germany because of the higher benefits and apply for asylum in Germany. Merkel refuses to budge, so Seehofer can either defy her because he controls the Federal police and implement the policy, which means she would have to fire him. Or he could simply resign.

Either action would man that the long alliance between the CSU and CDU is over, and that Merkel’s coalition would fall to pieces, forcing a new national election.

It’s not impossible that the CSU and AFD would even form a political alliance, which would give them almost enough seats to govern.

This scenario should play out very soon.

February 13, 2017 JoshuaPundit World Comments Off on Merkel’s Trying To Buy Her Way Out of Germany’s Refugee Crisis

Germany’s Chancellor Angela Merkel is facing new elections and is not doing at all well in the polls. Quite simply, the Muslim refugees she imported en masse to Germany have turned into a nightmare, with violent crime including sexual assaults at unheard of levels. And most of these refugees, rather [Read More]

While we’re paying attention to Russia’s corrupt dance with the Obama administration and the Clintons, don’t forget that Islam is still at war in Europe. My wanderings across the internet today put two closely related things before my eyes, one of which is a news report and the other an [Read More]