I always have understood that a scandal was an unusual and unexpected immoral or dishonest behavior from a person or institution previously considered moral, honest and reputable. So I admit to being confused.

The fracas appears to be about some anti-semitic cartoons the Time printed. The one above is an example, trashing Israel, Jews, President Trump and Israeli PM Netanyahu all at the same time. Kinda resembles this old Nazi cartoon of a Jew leading Churchill around, doesn’t it?

The new wrinkle is showing the Jew as a dog. As Imam Mohammad Tawhidi, a Muslim reform advocate reminds us, Islamist texts refer to Jewish people as descended from “ pigs, monkeys and dogs.”

At any rate, for some reason the Times caught hell for this, although not from too many of their usual readers I’m sure. They stonewalled things for what, 48 hours before removing the cartoon and claiming it was an ‘editorial mistake’, something that must have made anyone with newspaper or journalism experience laugh out loud. Cartoons usually get okayed by at least 4 people at most places before they run. Their little explanation didn’t contain an apology, of course. That came a day or so later. and was followed by this: 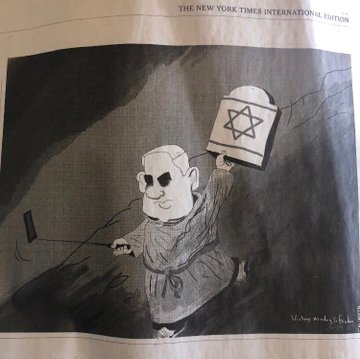 My my, two anti-semitic cartoons in a row! This one shows Netanyahu dressed as Moses, coming down from the Mount carrying a tablet emblazoned with the flag of Israel, while narcissistically taking a selfie and holding up a Jewish star. OHHHKAY, right after two synagogue attacks. Imagine what would have happened at the New York Time’s building if they had printed a similar cartoon mocking Islam or blacks?

I still don’t see why this is a New York Times scandal. The Times has always been anti-Israel. Like the BBC, they consistently bash Israel while cozying up to and rationalizing atrocities committed by Israel’s enemies. One way the Times does it is to hire anti-Israel writers like Tom Friedman and Roger Cohen with obviously Jewish names to cover for them. This is nothing new, believe me. So what New York Times scandal? Why the shock and surprise?

Weren’t these the same people who cheered and rationalized Barack Hussein Obama’s Iran deal? So what if Iran’s leaders have constantly talked about their goal of wiping Israel off the map? Or at best, forcing Israel back to indefensible borders? Of course the nice folks at the New York Times, the BBC and other ‘news sites’  aren’t anti-Semitic, are they? When it comes down to it, they merely support having 7 million Jews obliterated as long as someone else does the dirty work. And if a few Jews get beaten bloody in Crown Heights or shot down in their synagogues, well, these things happen, you know and they can always blame Donald Trump, right?

I particularly like the touch of putting President Trump in a yarmulke, a Jewish skullcap. Both the Poway shooter and the Pittsburgh killer referred to our president as a ‘Jew lover’ in the most obscene terms. Nothing like revving people like that up, right?

You see, this isn’t a scandal. This is business as usual for these people. They’re the same sort of people who collaborated with FDR to keep news of what Hitler was doing to the Jews from the American people. Who knows,  they might otherwise have pressured him to actually do something about it like bombing the train tracks leading to Auschwitz. Or pressuring the Brits to open the Palestine Mandate to Jewish migrants fleeing a hideous death as they were legally supposed to do instead of closing it to them. These are the same kind of ‘journalists’ who lied about what a great place Stalin’s USSR was, and who kept the Ukrainian Holdovar quiet. This was a largely unknown genocide that saw at least 2-3 million people die on Stalin’s orders. This is the same paper that deliberately published classified information on US troop movements in Iraq that could have cost US servicemen their lives.

READ  Yuuuuge crowd lining up for the Trump rally in Toledo, Ohio

So there isn’t any New York Times scandal here. Except, perhaps the fact that Pravda on the Hudson is still considered a legitimate newspaper. That’s a real scandal, and it ain’t nothing new.

So how does all this end, hmm? Tweets, editorials and condemnation of these cartoons  mean absolutely nothing.  And even those were lacking from every Democrat running for president in 2020. If you think I’m mistaken, just look at how the blatantly anti-Semitic statements of recently elected congresswomen Ilhan Omar and Rashida Tlaib were defended by their party. And how every Democrat 2020 hopeful boycotted AIPAC’s recent event except Senator  Corry Booker, who has a large Jewish constituency in his home state.

What we have here is one of our nation’s two major parties becoming a haven for Jew hatred, just like Labour in the UK.  This sort of thing needs an active response. When there’s no price to pay, nothing like this changes. America’s Jews had best understand that they are gradually becoming a target, in the Leftist media, on campuses and even while praying in synagogues.