In response to agitation by the Palestinian Authority over President Trump’s decision to recognize Israel’s capitol and move the U.S. embassy there,the UN Security Council (UNSC) hurriedly put together a resolution criticizing it. The entire process was little more than bad Kabuki theater, since the U.S. said openly it would use its veto as one of the five permanent members. The other 14 members all voted for it.

A look at who these members are is illuminating:

Some of these countries are actively hostile towards Israel, especially the Muslim majority nations. Others have large groups of restive Muslims they need to appease, others have important trade relationships with the Muslim world and some have a combination of all three.

U.S. Ambassador Nikki Haley correctly diagnosed this as an insult to the U.S., who hosts the UN on its soil and funds a disproportionate part of the organization’s budget. Here’s what she had to say:

“The United States will not be told by any country where we can put our embassy. What we have witnessed here is an insult. It won’t be forgotten. It is one more example of the UN doing more harm than good in addressing the Israeli Palestinian conflict.”

Well, true enough. Israel at the UN remains the Jew among nations..despised, discriminated against for the most part and singled out as the chief evil in the world community. For instance, non-permanent members of the UNSC serve rotating terms. One nation  that will never get a chance to serve on the UNSC is Israel, and that’s deliberate because many countries in the region Israel was lumped in with  don’t even recognize its existence let alone go along with allowing Israel to serve.

What happened next is that Iran and Yemen advanced a resolution in the UN General Assembly, which allows no veto and where every member gets a vote. This one passed 128-9, with 33 abstentions and a pretty fair share of no-shows, as the chart below shows. 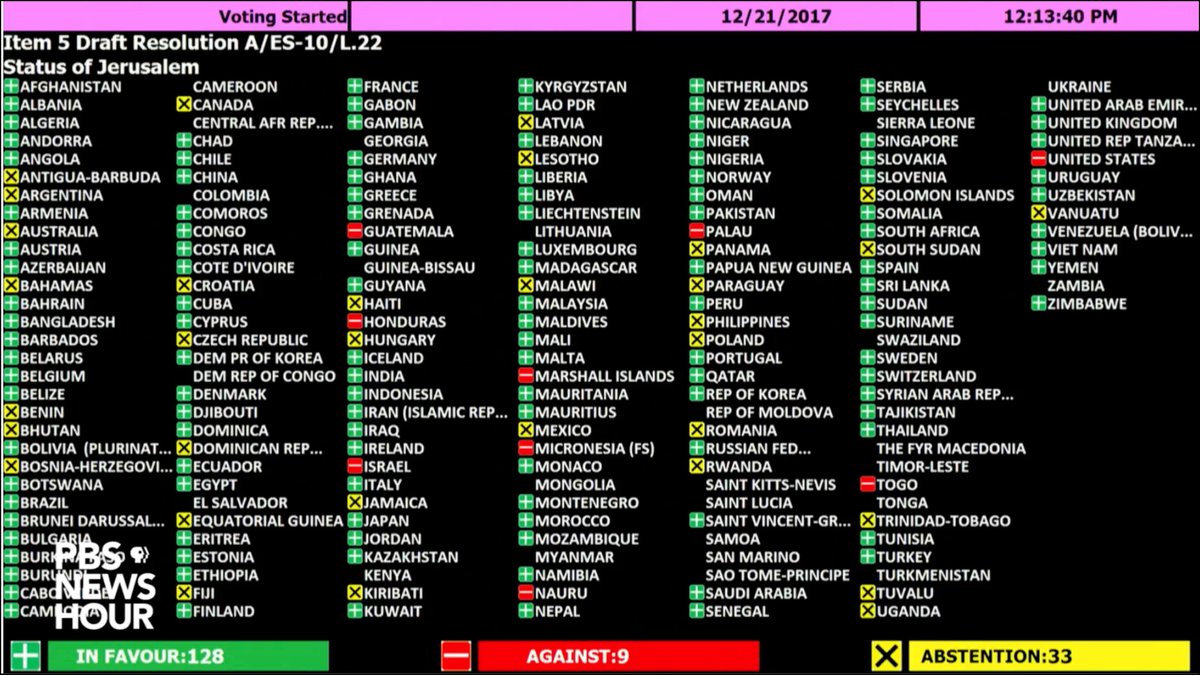 Again, there are certain patterns. For instance, you’ll notice that all of the Western EU members with large numbers of violent restive Muslims they imported voted for this resolution,like the UK,France, Sweden, Belgium, the Netherlands, and Germany. So did EU countries historically biased against Israel like Ireland and Norway. Most of the EU countries in Eastern Europe voted against it, abstained or simply didn’t show up for the vote.

Most majority Muslim countries voted for it, as did most countries with a substantial Muslim population. But Turkmenistan did not. Neither did Kenya, which enjoys a very good relationship with Israel in terms of trade and security cooperation. India, which likewise has a great relationship with Israel voted for it, largely because of commercial interests and their large Muslim population.

So what does all this mean? Here’s what today’s UN vote really meant.

The same is true of the UNSC vote earlier.

Like all the other UN diktats involving Israel, this one is worth about as much as used toilet paper. Only Security Council resolutions with a Series 7 category mean anything or have any legal standing at all, and all the ones Israel has supposedly ‘ignored’ are Series 5 at best.

Fun fact…the UN, of course only abides by what it want to, even when it comes to Series 7 resolutions that supposedly have consequences for violations.

In 2006, Israel had overcome a poor start in its war against Hezbollah once the always incompetent Ehud Olmert realized that he actually had to have a real plan rather than just sending the IDF into battle piecemeal with zero support. And a real professional soldier with command experience running things. So he told his far left  Defense minister Amir Peretz to go hide somewhere and put Ehud Barack in charge. The IDF under his command was able to regroup , beat Hezbollah at  its own game  and advance to the Litani River, where they had Hezbollah in an iron ring. At that point, GW Bush’s dysfunctional Secretary of State Condaleeza Rice stepped in and bullied Olmert into accepting a ceasefire.

As an incentive, Ms. Rice engineered a Series 7 UNSC resolution, UNSC #1701. It called for the disarming of Hezbollah, for UNFIL(United Nations Forces in Lebanon) forces on the border to stop Hezbollah from simply returning to its old bases in South Lebanon and sanctions and penalties on any country that rearmed Hezbollah and replenished it’s missile arsenal.  The resolution  passed, Olmert stupidly agreed and removed the IDF from Lebanon instead of finishing off Hezbollah once and for all.

The minute the IDF left and UNFIL took over, Hezbollah started creeping back to its old bases in the south, When Israel complained about UNFIL not abiding by UNSC 1701, the commander of what were mostly Pakistani troops simply laughed at the Israelis and replied that stopping Hezbollah from moving back to the border wasn’t his job, no matter what any UNSC resolution said. Needless to say, Hezbollah was never disarmed, and Syria and Iran started re-arming Hezbollah and replenished Hezbollah’s missile arsenal in record time.

The UN is dysfunctional at this stage for one simple reason. Democracies simply don’t do well when  they’re dealing with despotic non-democratic countries…especially when two of those non-democracies have veto power and can obstruct and gum up the works at will. The minute the UN opened its doors to despotic countries like the Soviet Union, it was eventually doomed to failure.  It would have been far better to allow these countries to address the UN in discussion but limit voting to the democracies. The scramble to admit brand new countries with ‘strong men’ in charge that followed WWII and introduced tribalism and ethnic blocs into the equation only sped up the process of decay.

As for today’s shadow show, yes, what today’s UN vote really meant was… nothing.

For a number of countries that have good relationships with Israel to abstain from this fiasco or even vote yes is simply a case of not buying trouble by indulging in a worthless display. And believe me both Trump and the Israelis know it. India, Japan, Azerbaijan, Bulgaria and Vietnam, all of whom have great relations with Israel voted yes, and like Canada, Australia, who also has great relations with Israel abstained. I guarantee you that countries friendly to Israel who felt compelled to vote yes or abstain talked to them about it beforehand. And of course, Israel isn’t going to abide by it anyway.

Even voting on this nonsense one way or the other is giving it more importance than it actually has, although I wouldn’t be surprised if Trump administers some puppy training to some of the ‘yes’ voters in a few cases. Because it is an insult, to tell America who or what it can recognize and where it can put its embassies.

And when you deliberately insult someone, there are certain results. Especially when that someone is your landlord and paymaster.

Oh, and those nations who voted no, abstained from voting or the 21 nations didn’t cast a vote? Ambassador Haley is giving them a party. There are certain results that come from supporting the U.S. too.

According to Israel’s Hebrew calendar, today marks the Jubilee celebration of Israel’s Six Day War and the liberation of Jerusalem. Take a good look at the three men standing there, along with Israel’s Deputy Foreign Minister Tzipi Hotovely, Dr. Yitzhak Yifat, Tzion Karasenti and Chaim Oshri. they took a tour [Read More]

November 5, 2017 Bookworm Donald Trump Comments Off on I’m not a hypocrite when I don’t see Trump as a sexual predator

I have six reasons why I don’t think Trump is a sexual predator akin to the Hollywood mashers. Do you agree? And if you do, do you have even better reasons? I was with a group of friends yesterday, all of whom are anti-Trump Progressives. (And yes, I do have [Read More]

By: Mike McDaniel    As regular readers know, climate hysteric Michael Mann is among the leaders of a discredited science that regularly engage in serial predictions of the doom of mankind. So often has our collective doom been predicted, it’s hard to tell if the Earth still exists and if [Read More]