Every Tuesday, the Council nominates some of the slimiest, most despicable characters in public life for some deed of evil, cowardice or corruption they’ve performed. Then we vote to single out one particular Weasel for special mention, to whom we award the statuette of shame, our special, 100% plastic Golden Weasel. This week’s nominees were all slime-worthy and disgusting,but in the end the overwhelming winner was….the envelope please…

The Right Planet : Brian Williams claimed the helicopter he was aboard was forced down after being hit by an RPG (rocket-propelled grenade) during the Iraq invasion in 2003. But military personnel who were there at the time claim Williams was not in the Chinook helicopter that received shrapnel damage from the RPG. Brian Williams then admitted his “mistake” in a lengthy Facebook post, blaming the ‘fog of memory over 12 years.’ Now, there are a number of allegations going around claiming Williams has a history of embellishing his experiences, including saving puppies from a fire, seeing dead bodies float down a river during Hurricane Katrina, and Katyusha rockets whistling past his helicopter while he reported from Israel in 2006. Maureen Dowd recently wrote NBC execs were warned a year ago Brian Williams was “constantly inflating his biography.” Interestingly, some so-called “insiders” allege Williams has been lying for years, and NBC knew all about it. If true, why did NBC choose to do nothing about it?

Virginia Right! : My nomination this week is Lyin’ Brian Williams the NBC News Anchor who prefers to embellish the news and be the news rather than just read it.

I’m not sure what it is about the Middle East. All the Liberals seem to have delusions of grandeur and feel the need to put themselves in harm’s way, but only in their minds.

NBC already had credibility problems and replacing Williams will not be easy. There is no such thing as an honest left wing journalist. There are only those that have been caught lying and those who have yet to be caught lying.

Let’s have some fun and look at a few of the other Lyin’ Brian snapshotz: Now, all this does sort of make you stop and think. OK, Brian Williams has told a heckuva lot of lies,but then he’s not really a journalist – he just plays one on TV. He’s really just an actor hired for his ability to sell the Leftist narrative anyway. So why does he catch all kinds of hell and lose his job when those whom tell  lies that do real damage, like President Obama , the Clintons, and a host of others get a pass..usually by people like Brian Williams?

I think I understand why.

Think of the Left and its ideas as one big seedy carny, where the rubes and their wallets are lured by loud, impressive carnival barkers with a swift line of gab to patronize third rate acts and rigged games where it’s next to impossible to win any of the flashy prizes on display. Impossible, that is unless you’re a paid shill working for the carny to ‘win’ something and draw a crowd of people whom swallow the con and line up to try their luck. 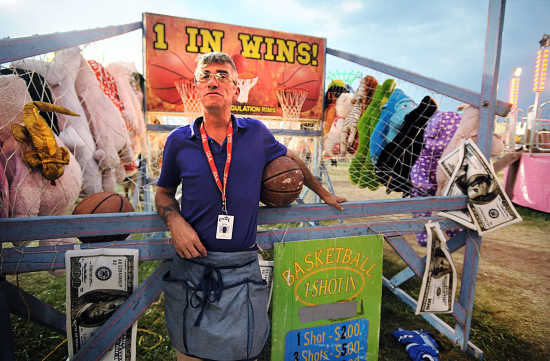 Ever been to one of those?

Now, if people really thought about it, they’d realize that the cooch dancer in the tent they bought  $5 tickets to see do her erotic snake dance wasn’t really a young, sexy blond like  the barker said but probably someone’s bored middle aged overweight wife whose act was nothing worth anywhere near that much. And they’d realize that they might be able to buy some of those stupid prizes at the games outright for far less than playing them for 20 minutes or a half hour was going to cost them, and in the end, they’d actually have something for their money instead of a sheepish grin and an empty wallet.

What reeled them in, of course, was belief, belief that they were actually going to get something special. Belief stoked by the barkers and the shills.

And that’s why Brian Williams got slammed.

You see,   Brian Williams was one of the barkers, the guy selling the con.  If one of those screws up and gets caught, well, you simply  hire another one, and maybe recycle somebody like Brian Williams a few months down the road when everybody’s forgotten all about what happened. Meanwhile, he can sweep up or clean out the concession stands or something else  backstage to make himself useful until his ‘comeback.’

But  Hillary Clinton, Barack Obama, the other usual suspects and the crap they’re peddling are the con, and that’s very different. They’re the tawdry merchandise barkers like Williams, the crowd at MSNBC and the New York Times are selling. It’s one thing to axe a salesman or a shill who got clumsy and got caught. It’s another thing entirely when the rubes find out the product is garbage, the acts aren’t nearly as appealing as they were told they were and that all important  belief gets suspended. Then the marks stop showing up with money in hand, the whole carny is merely seen as the predatory animal it is and the show could go out of business.

So let’s award Brian Wilson his well-earned Golden Weasel.. If anything, what happened is that he forgot he was just the carnival barker rather than the talent itself. Trying to stretch things so that he was the show rather than just another shill was where he went wrong.