I pick Gloria Steinem for her decades-long attack on traditional America and her general spreading of venom, especially for men.

This is her latest tweet. It’s a nonsensical but subtle and demeaning attack, something she is expert at.

Gloria Steinem: “If [Cis] Men Could Get Pregnant Abortion Would Be A Sacrament”….

JoshuaPundit: If you remember the comic book heroes of your youth, you will be astounded by what’s become of them lately.

Like America’s movies, they used to be a part of America’s culture that nurtured heroic values and provided role models for America’s youth. 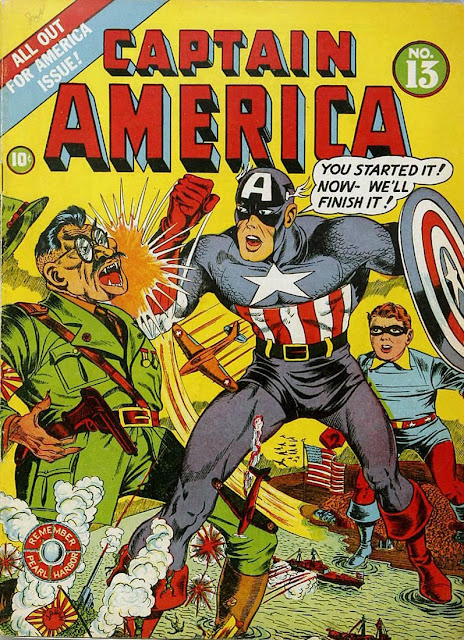 Nowadays, Superman has renounced his American citizenship in favor of working for the UN because “I’m tired of having my actions construed as instruments of U.S. policy.”

And Captain America? His enemies aren’t America’s any more either. Nowadays, Disney (who owns Marvel Comics)has him fighting – wait for it – evil Republicans and ‘right wingers’ who oppose amnesty for illegal aliens:

Like a lot of corporations who promote Leftist ideas, Disney loves illegal alien workers and abusing H1B visas on tech workers to keep wages on the plantation low and keep the servants from getting any ideas above their place.

They’ve even got the ‘right wingers’ in this comic wearing the hoods so beloved of Democrats in the not so Good Old Days. And of course, Captain Marvel’s race has changed, for obvious reasons.

I once heard Rush Limbaugh say some time ago that ‘Liberalism is like an acid that distorts and ruins everything it touches.” At the time I thought that was over the top, but I know concede he was largely correct..except, of course, I never use the word ‘liberalism’ to describe these prog fascists.

From the day they enter school, turn on a TV, or yes, read a comic book, America’s kids are subject to this kind of mind rape. That’s why a willful perversion like this is important.

The Watcher:The United Nations Educational, Scientific and Cultural Organization (UNESCO) has a resolution before it to vote on, submitted by the Arab members of the organization on behalf of the Palestinian Authority, which has observer status in the UN.

The resolution would designate the holiest site in Judaisim,the Western Wall in the Old City of Jerusalem known as the Kotel as an integral part of the Al-Aqsa Mosque.

In reality, the Kotel predates the mosque by a mere 6 centuries, and the mosque was literally built on top of the Kotel as a sign of conquest during the brief Arab possession of Jerusalem.

In addition to designating the Western Wall part of the mosque, the resolution also exclusively condemns Israel for responses to terrorism attacks on Jews in Jerusalem. It’s apparently not enough to try rob Jews of their heritage. As an added bonus, the resolution blames them for defending themselves and supports those attacking them.

The resolution is almost certain to pass…your tax dollars, about $400 million at work.

Considering the vicious lies told by Palestinian dictator Mahmoud Abbas about how Israel is attempting to change the status quo on the Temple Mount, UNESCO’s attempt to actually do so is despicable while blaming Israel is despicable.

Islam does not play well with others, and this is what always happens when you try to share anything. If this passes, Israel would be both well advised and justified in evicting the Jordanian Waqf that now has custody of the Temple Mount and putting some Israeli Muslims committed to peace in charge of the mosque.