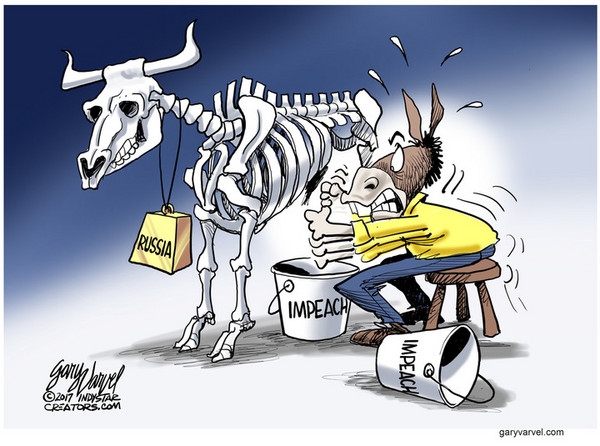 By the very talented Gary Varvel…see more of his work at Gary Varvel.com

Ah, the plight of the poor Democrats,still hoping to get milk from a dead cow. All the lies, faux indignation and insults as well as the time and money spent have resulted in…absolutely nothing. Except an increased reaization by most Americans that the Democrats and their media aren’t to be trusted on e bit.

There actually is an impeachment bill circulating among the Democrats right now, based on a twisted and totally inaccurate reading of the 25th Amendment, originally designed to allow removal of a president if he was incapacitated and unable to perform his duties.

25 House Democrats have signed on to it, with the bill being sponsored by a radical leftist congressman Jamie Raskin (D-MD) and con-sponsored by – wait for it- disgraced former DNC head Debbie Wasserman Schults(D-FL) and the serially corrupt John Conyers (D-MI).

Raskin is pretty vague on the constitutional grounds for this and he and his pals are totally clueless about what the public reaction would be, but are going ahead anyway.

Trump’s Speech To Congress… A Shining Moment in American History

President Donald Trump made a speech last night to a joint session of congress. During the preceding day, the usual suspects in print and broadcast media put out a narrative that Trump’s speech would ‘tone down Trump’ and show a new ‘moderation.’ There was talk about Trump compromising on his [Read More]

Has Sen. Chuck Schumer’s Own Racist History Comes Back To Bite Him?

January 6, 2017 JoshuaPundit Politics Comments Off on Has Sen. Chuck Schumer’s Own Racist History Comes Back To Bite Him?

Democrat Minority leader Chuck Schumer has always been one to call Republicans ‘racist.’ He’s done it repeatedly to Donald Trump, tried to paste the label on the late Justice Alito and has promised to attack Attorney General nominee Jeff Sessions,the judge who destroyed the Klu Klau Klan in Alabama as [Read More]

The Communist media complex is up in arms this morning over the confiscation of journalist, Ali Watkins phone and email records  by federal investigators, incident of which is connected to Thursday’s arrest and sealed grand jury indictment of former long-time staffer of the Senate Select Intelligence Committee, James A. Wolfe. Wolfe, the [Read More]