For full disclosure: my beloved uncle was one of the many (disproportionately many) young Jews that went to Spain to fight against Franco, losing several of his good friends, enduring the fate of other “displaced persons” in the French camps, joining the Red Army and fighting with distinction till the demise of the Nazi regime.

So when I see how a piece of human refuse uses a solemn and politics-free occasion to throw his feces at Jews, it surely boils my blood. Wish I could have been there… But see for yourself.

Tosh McDonald:
The account below is by the gentleman representing Jewish soldiers at the wreath laying ceremony. @McDonaldTosh @ASLEFunion pic.twitter.com/fbjAi92Di4

For better viewing of the Jewish gentleman’s report, click on the image below:

Oh, and accidentally: tell me who your friends are… 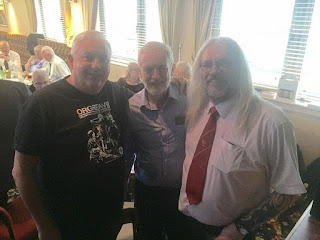 About Snoopy 19 Articles
Snoopy the Goon grew up in the Soviet Union, and now lives in Israel. He blogs at Simply Jews