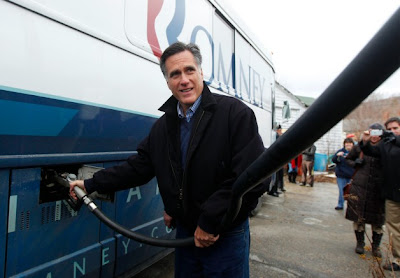 As you know, the Watcher’s Council represents the cutting edge of political thought in the blogosphere. You already read their weekly offerings on the issues and if you’re really on the ball, read their incisive and stimulating sites.

With that in mind, as a regular item we’re going to feature Council members ( and some very interesting non-Council guests) presenting short takes on the day’s important issues as they come up.

Today, the Watcher’s Council weigh in on what advice they’d give to GOP nominee Mitt Romney if he wants to win in November.

Bookworm Room: “It’s easier to say what Romney should not do. He should not try to out cool Obama. Trying to be ‘hip’ will not work, both because it’s not part of his natural persona and because the media will savage him. Romney should cultivate a pater familias demeanor. We already know Obama is Eddie Haskell, the cool hustler who invariably gets you into trouble. Romney needs to project himself as Ward Cleaver, the wise parent who comes to the rescue after Eddie has done his dirty work.It’s a role that Romney is well suited to play, as long as he avoids condescension.

The Noisy Room: My suggestions to Mitt Romney; come up with a solid. decisive economic plan that includes massive sending cuts, deficit reduction and a flat tax plan;a proposal for ending illegal immigration and guarding our borders; an energy plan that includes, oil, coal, fracking and a revamping of our power grid;a plan for a military buildup and a strong stance against Iran; a return to constitutional principles and a mandate for smaller government, including the repeal of ObamaCare; and confront radical Islam head on.

Joshuapundit: I’m going to keep my advice very general.Aside from hiring me to write speeches for him, first of all, Mitt Romney needs to excite and motivate the base, something he’s already shown he’s capable of doing.They’re already motivated by the prospect of an Obama second term,now he needs to motivate them for a Romney presidency.A good start would be scheduling an interview on Rush Limbaugh’s show, and courting Sarah Palin’s support,even if it’s covert. Second, he needs to devote a great deal of thought as to his running mate. With the right choice, there are some significant goodies obtainable in the electoral market.Third, he needs to keep asking Reagan’s question, “Are you better off now than you were four years ago?” And finally, use ridicule and humor to attack President Obama’s abysmal tenure..not only will it play well, but this president is perhaps the most thin-skinned in living memory, won’t handle it well, and will remind the American people about everything they dislike about him.

The Political Commentator: The job for Romney is really quite simple as I see it. It is to try and force Obama to do what he wants to avoid at all costs. Make him face his actual record for the years in the White House and not allow Obama to make the election a referendum on the haves versus the have nots in the country or any other topic that pits one group against the other. To get into that type of debate is a losing strategy as this would help to mobilize the constituencies that helped Obama win in 2008 and who have become disenchanted with this President over time. This needs to be an election based on hard facts and actual ideas for how we take the country to where it needs to be. If it turns into a campaign of slogans, class warfare and the blame game Romney will most likely lose.At all costs he must not let the Obama campaign dictate the conversation but he needs to steer the conversation to where it needs to be. The quantifiable failure of the Obama presidency and how a Romney presidency will lead the country forward!

Rhymes With Right :There’s a really simple answer to the question — keep your eye on the ball . Mitt Romney needs to remember that this is an election about the economy. When Obama and his surrogates try to make the issue about something else, he needs to bring it back to the economy. When the attacks begin on his religion, he needs to swat them down as a distraction and ask why the president and his supporters don’t want to talk about the economy. When they point to the cost of Ann Romney’s clothes or the size/number of his homes, he needs to point out that he earned his money creating jobs for Americans — and point out that Obama hasn’t worked in the private sector since he was a high school kid scooping ice cream at Baskin Robbins. Indeed, mitt Romney must conduct a campaign that revolves around a single theme that he hit in his victory speech a couple weeks back — “It’s still about the economy …and we’re not stupid.” That should be on every bumper sticker and campaign button — and in every ad.

The Independent Sentinel: I think Romney has to stay in the middle with the independents – the right will vote for him. He needs to tell us the specific policies and ideas that would turn around the Obama economy and get us jobs. Obama’s phony unemployment numbers might go below 8% so the economy won’t be enough. He should brag about how he made things happen, not the firings :), but the mechanics. He is very generous and sent his entire company to save a missing colleagues daughter’s life and succeeded – he should get those things out there. I’d like to see the Dept of Energy and the EPA Greatly downsized, the dept of Ed eliminated, all czars fired and have him actually listen to his dept secretaries and a small number of advisors so he has his hand on the pulse. I want him to sound very confident, strong, unwavering, funny

The Razor :Leave social issues out of it. Romney needs to imagine what Rick Santorum would do or say on a particular social issue, then forget that and focus on the economy. Any social conservative who sits out this election because Romney doesn’t promise to make the kids pray in school or bring back the ban on gays in the military isn’t a conservative at all. He or she is simply a moron.

I might also add that Obama is going negative, and the best thing Romney can do is to go positive. Remind Americans about what unites us as a people, not what divides us. That doesn’t mean he should ignore the attacks: he personally shouldn’t respond to them but the campaign should have a war room that has a talking head rebutting any particular charge in minutes and firing back. That’s what the GOP party is for. In summary, Romney needs to be like Reagan. He needs to inspire and be above the fray while his campaign and the GOP do his dirty work for him.

The Right Planet: Don’t apologize because you are financially successful–embrace it! Be proud of your accomplishments. Don’t ever back down from it. Of course, the Left will hate it. Pour it on thicker. The Progressive Left is waging a War on Prosperity–free market itself. Point it out forcefully.Additionally, I hate it when I see a Republican take a strong stance on an issue and then turn around and apologize for it because the MSM came after them tooth, fang and nail. Of course the MSM will come after you tooth, fang and nail! Go after them tooth, fang and nail.

Finally, Obama loves to marginalize and isolate his opponents per Saul Alinsky. Turn the tables on him. Don’ be afraid of attacking Obama. If any president ever needed to be attacked for his disastrous policies that are destroying our economic future and national sovereignty, it’s Barack Hussein Obama.

Gay Patriot: To win, he needs to do one thing he started to do during the campaign for the GOP nomination, talk about his business success. And put that in the context of the numerous opportunities available to entrepreneurs — and aspiring entrepreneurs. He needs a quick response team, similar to that of Bill Clinton’s 1992 “War Room,” ready to deflect attacks and fire back when necessary.

He, however, must keep his focus on the policies he wishes to put into place to replace the failed ones of the past 3 1/2 years and avoid getting in a tit-for-tat with Obama on the bright shiny object of the day. In short, he should focus on the issues, never attack Obama personally, maybe even acknowledge some of the Democrat’s good qualities, appreciating his appeal (he’s going to need to win a whole bunch of voters who backed the Democrat in ’08; insulting them won’t win them over). As much as possible, he should leave the attacks to his surrogates and focus himself on promoting an optimistic vision of America’s future and a list of policies that will make that future possible for an increasing number of Americans.