“”No solution can be reached with terror except by striking it with an iron fist.” “ – Syrian Leader Basher Assad

“You don’t despair about something like the Middle East, you just do the best you can.”– PJ O’Rourke

“Above all, it is not decency or goodness of gentleness that impresses the Middle East, but strength.”
– Meir Kahane

This week’s winning essay by a hair is Joshuapundit’s Syria Splits Apart As Assad Digs In Against ISIS . While the main focus of attention for the media these days is on Iraq, interesting things are going on in Syria that could shape the Middle East for some time, and this was my take on it.Here’s a slice:

While a lot of attention is being paid to ISIS’s successes in Iraq, few people have been watching the changes going on in Syria.

As I predicted just shy of three years ago, Syria, a made up country to begin with appears to be fracturing pretty much along the lines I saw back then.

Assad’s hold on Syria depended on two things – how long the carnage could continue on one side or the other before it reached the point of no return and how long the Russians, Hezbollah and Iran would continue to support him. That point has apparently been reached with a quarter of a million deaths and the reduction of Assad’s army from its beginning strength at 300,000 to something like 175,000 men from Assad’s regular army, pro-regime Syrian militias and foreign fighters mostly from Hezbollah and Iran.

He simply no longer has the forces necessary to hold all of Syria. And his allies are gradually moving on.

The latest gain for ISIS was their successful offensive on the ancient city of Palmyra in Eastern Syria,which gave them a strategic path to assaults on the regime’s key cities of Homs and Hama. If they’re successful, they would literally cut off Damascus from the rest of Assad’s territory.

The victory by Isis was celebrated Old School style:

Eye-witnesses have reported the streets are strewn with bodies – the latest victims of the Islamic State’s unrelenting savagery – on the same day photographs of captured Syrian soldiers have emerged.

It follows the killing of nearly 300 pro-government troops two days after they captured the city, now symbolised by a black ISIS flag flying above an ancient citadel. 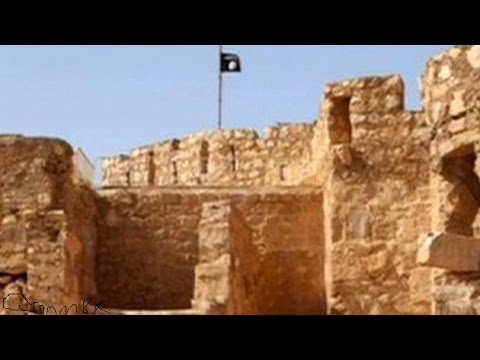 What Assad is hoping for now is that he has enough troops to hold on to his strategic corridor in North and west Syria..Damascus, Homs and Hama and the coast areas of Latakia and Tartus, key cities where the majority of Alawites, Assad’s Shi’ite oriented sect live.

What he’s doing is attempting a strategic withdrawal into territory his forces are better able to hold,something his allies are likely insisting on because their own commitments are becoming strained.

For the Russians, supplying Assad with the tools of the trade has become an expensive proposition, one Russia has increasing difficulty meeting. Putin is still selling Assad ammunition and other supplies, but the Russians have cut way back on the more expensive toys like attack helicopters and are taking a wait and see attitude.

As Hezbollah’s casualties have increased in Syria, its leader Sheik Nasrallah has come under massive pressure to cut back on the number of troops being sent to Syria from Lebanon. Hezbollah troops are still fighting in Qalamoun along the Lebanese border,one of the few areas where the Assad regime is taking the offensive, but massive casualties incurred during Assad’s failed offensive in February on Aleppo have taken their toll.

This all puts a great deal of pressure on Iran. Aside from the financial cost, the strategic cost is huge. As Assad is forced into a defensive redoubt, the Shi’te bloc Iran thought it was creating from Tehran to Beirut is increasingly unlikely, especially with the pressure ISIS is putting on Iran’s Shi’ite allies in Iraq. They will undoubtedly have to commit a lot more resources, human and otherwise just to keep Assad holding on.

For Basher Assad, his task will be to hold on to Damascus, the highways between Damascus and Beruit and Damascus and Homs, as well as the coast cities like Latakia and Tartous. With his reduced supply lines and less territory to defend, Assad has a decent shot at hanging on, especially since his part of Syria would contain about half of the country’s population.

More at the link, including an interesting update on ISIS’s latest moves.

In our non-Council category, the winner was Western Journalism – Why The Mass Media Are Silent On The Largest Human Rights Disaster Of Our Time submitted by Joshuapundit. It features a must-see video by Ray Ibrahim that explains exactly why the mass media are keeping quiet.

Here are this week’s full results. Only Don Surber was unable to vote this week, but was not subject to the usual 2/3 vote penalty for not voting: