“This morning in Jerusalem Palestinians attacked Jews who were praying in a synagogue.To have this kind of act, which is a pure result of incitement, of calls for ‘days of rage,’ of just irresponsibility, is unacceptable.”

“People who have come to worship God in a sanctuary of a synagogue were… murdered in a holy place in an act of pure terror and senseless brutality and murder.” – U.S. Secretary of State John Kerry

“There are two races of men in this world but only these two: the race of the decent man and the race of the indecent man.” – Victor Frankl, Auschwitz survivor, in ‘Man’s Search For Meaning‘

“It’s not enough for us to say: ‘There are those carrying out Ribat’ (religious war over land claimed to be Islamic). We must all carry out Ribat in the Al-Aqsa [Mosque]. It’s not enough for us to say: ‘The settlers have arrived [at the Mosque]’. They have come, and  we have to prevent them, by any means necessary, from entering the Sanctuary. They have no right to enter it. They have no right to defile it. – Mahmoud Abbas, inciting violence on Official Palestinian Authority TV

This week’s winning essay was Joshuapundit’s –The Blood Of Zion Cries Out It was my reaction on the day four rabbis and a Druze traffic cop who tried to stop the killers were murdered with guns and meat cleavers in a Jerusalem synagogue. Here’s a slice:

Early this morning, four Jews at morning prayers were murdered in a synagogue in Jerusalem after two Palestinian broke in and assaulted the worshipers with gunfire and meat cleavers.

Many others were wounded and four are in critical condition.

The terrorist attack took place in Har Hof a predominantly Orthodox neighborhood at the at the Kehilat Yaakov synagogue on Agasi Street.

The Murder victims were identified as Rabbi Moshe Twersky, the head of the Torat Moshe yeshiva, 59; 40-year-old  Rabbi Aryeh Kupinsky; 50-year-old Rabbi Kalman Levine; and 68-year-old Rabbi Avraham Shmuel Goldberg(HY”D). Rabbi Kupinsky, Rabbi Levine and Rabbi Twersky were all American citizens, while Rabbi Goldberg was a British subject. A Druze policeman, 30-year-old Master Sergeant Zidan Sif subsequently died of his wounds as well, and all Israel will mourn and honor him.

The killers stormed the synagogue at 7 AM local time. There was no warning and no way for the victims to defend themselves.The rabbis were murdered during the sacred prayer of Shimoneh Esrei, with siddurim (prayer books) in their hands and their tefillum on.

Eye witness Ya’akov Amos said: ‘The terrorist moved to within a metre of me then started shooting. One, two, three, bang, bang, bang. I immediately hit the ground and tried to protect myself with a prayer stand. He kept screaming ‘Allah hu’Akbar’.

There was blood everywhere, so much that one of the medical workers slipped in it and broke his leg.

The international reaction was interesting. Even U.S. Secretary of State John Kerry seemed shocked, with his voice quavering. He even used the “T” word and called for an end to incitement against Jews.

Phillip Hammond, Britain’s Foreign Secretary contented himself with a bloodless statement that ‘both sides’ should seek to ‘reduce tension.’ President Obama, of course, said much the same thing. Somehow, I doubt they would have merely talked about both sides reducing tension if four imams had been murdered by a Jew and Qu’rans profaned in this way.

Israel’s economics minister Naftali Bennett was interviewed by the BBC today, and provides us with another indication of exactly how sick and depraved Britain has become when it comes to Israel and the Jews.

Notice how the interviewer doesn’t even address the issue of Abbas inciting terrorism, but pulls the case of an Arab bus driver who died yesterday, as though that made the savage murder of four Jews at prayer legitimate. That Arab driver, by the way, had a full investigation and an autopsy done on him and there is no doubt he committed suicide. Unlike the Palestinian Authority, Israel jails murderers no matter who they are.

I really felt like saying ‘Kol Hakavod’ when Bennett held up a picture of one of the victims, which the interviewer hastily told him to put down lest he upset the gentle sensibilities of her viewers. I think it is absolutely essential to do just that – to let the British public see what their government is funding and supporting. And I hope it upsets them to the point of utter shame.

At the end of the interview, Bennett says that Britain is going to have to make a choice of whether they support the Free World or not. As I’m sure Bennett knows, the British Government has already made that choice.Which is why, perhaps, they feel compelled to put up with soldiers being beheaded in broad daylight and no go areas for police and non-Muslims in London and other large British cities. 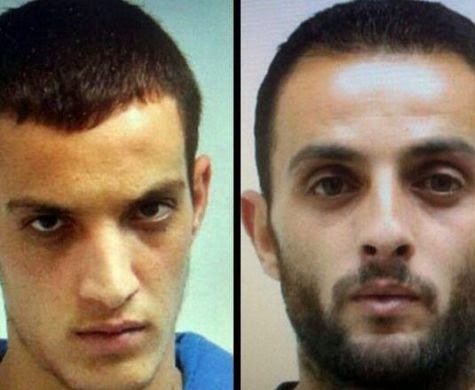 The murderers were both killed in a shootout with police at the scene. They were Ghassan and Oday Abu Jamal from the Jabal Mukaber neighborhood in east Jerusalem. Needless to say, they were acclaimed as heroes and martyrs by all the factions of the Arabs whom call themselves Palestinians. 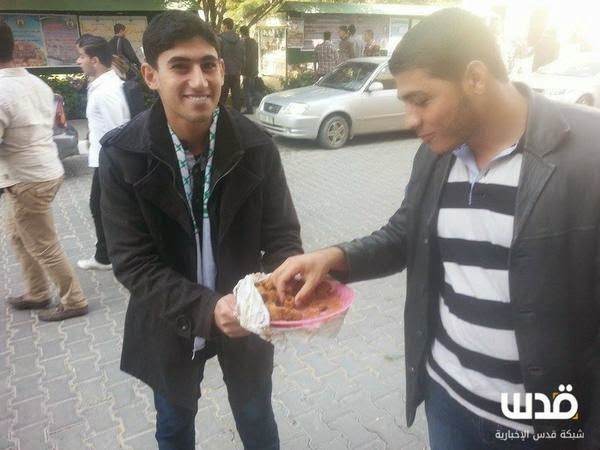 “We responded with shouts of joy when we received the news about their deaths,” Ala’a Abu Jamal said of his cousins Ghassan and Uday Abu Jamal to Yedioth Aharonoth. “People here distributed candies to guests who visited us, and there was joy for the martyrs.”

In a message published on its official new website Al-Resalah, Hamas said the attack was “a quality development in fighting the occupation. We highly value the heroism of its operatives.” Hamas spokesman Sami Abu Zuhri praised the attack on Qatari news channel Al-Jazeera as “heroic,” calling for more attacks of the same kind.

The Arab killer is asking ‘Where are they hiding?” Needless to say, in spite of what this cartoon shows none of the worshipers were armed.

And Fatah? Mahmoud Abbas, AKA Abu Mazen issued a ‘condemnation’ that wasn’t one. In a statement (in English, not Arabic)it said that “The Palestinian presidency” condemns violence “from whatever source” and “demands an end to the invasions of Al-Aqsa Mosque and the provocations of the Settlers.”

In other words, ‘So sorry, but unless you surrender Jerusalem to us expect more of the same.’

This is the same Mahmoud Abbas who accused Jews of “contaminating” Al-Aqsa Mosque last week, who just a few days ago was telling his people, in Arabic, to ‘defend Jerusalem’ by any means necessary. This is the same Mahmoud Abbas who said nothing when Fatah published cartoons and Facebook posts encouraging terrorist attacks on Jews and “days of rage” to defend the ‘threatened’ Al-Aqsa.

Tawfik Tirawi, former chief of the Palestinian General Security in the West Bank and a member of Fatah’s Central Committee made it even plainer, and in Arabic. Today he told a radio station in Hebron that the attack was “nothing but a reaction to the recent crimes of the occupation and the settlers in occupied Jerusalem and across the nation. The threats of the occupation against our people and the Palestinian leadership, represented by the president, will only increase our efforts in safeguarding our rights.”

His remarks were reprinted on Fatah’s official Facebook page.

I should make something clear here. This is not the fault of Abbas, or Hamas, or any of the Arabs who identify themselves as Palestinians.

It is the fault of the Israeli government.

A significant number of the Palestinians are simply acting as they have always acted since the 1920’s, and these tendencies were unleashed even further once Arafat and the PLO were allowed in to take over after Oslo.

Israeli governments since Oslo have always allowed themselves to be pressured to ignore these instances of sheer horror…to release  convicted murderers, to make concessions to the terrorist entities on Israel’s borders, and most of all to avoid  finishing them off entirely when their violence and bloodshed mandated a response. This has been especially true since Barack Obama, who styles himself as the Palestinian’s very own community organizer entered the White House.

Is it any wonder that this sort of thing continues to happen? Is it really so puzzling that after allowing Hamas to continue in Gaza and maintaining any kind of relationship with Abbas and the PLO once they allied themselves openly with Hamas that they would resort back to Arafat’s tactics?

Yasser Arafat himself outlined for his followers what this war was really about. On Jordanian TV, right after signing the Oslo Accords he was criticized for signing a peace agreement with the Jews. He responded by reminding his audience of the Peace of Hubidiyeh, a treaty Mohammed made with the Quraysh tribe that he violated as soon as he was strong enough to massacre them, a story every Muslim knows. And then he outlined exactly what this war was about, saying that “either the Jews will push us into the sea or we will push them into the sea.”

Arafat, the leaders of Hamas and numerous members of Fatah have sung the same songs for years. Is it their fault that Israeli governments for years have refused to take them seriously?

In our non-Council category, the winner was Victor Davis Hanson – A Moral primer submitted by Joshuapundit. Hanson is an old classicist among his other virtues.In this essay, he looks at the state of America and the world, and especially the president who leads us and sees a lack of political and personal morality as a deadly problem, possibly a terminal one for our republic. Do read it.