The L.A. teacher’s strike involves over 30,000 unionized  Los Angeles Unified School District (LAUSD) teachers and other school employees have gone out on strike to demand higher pay and ‘smaller class sizes.’ The truth of the matter? The entire strike is an outrageous fraud.

What the teachers and administrators want is a clear indication that this is a lot more than a labor dispute.

The unions want what they call fully staffed schools, meaning more teachers, librarians, nurses, admin staff, and counselors, with limits on class sizes. And of course, a 6.6% raise with back pay for
the 2017-18 school year.

Let’s examine this in detail, shall we?

For working 8 months per year, the average pay of LAUSD teachers is -wait for it-$75,504, based on last year’s numbers. And that’s a median figure, which includes brand new teachers with no experience. Teachers with a few years experience can earn a lot more, and that includes a generous benefits package most workers could only dream of.Principles and administrators earn a lot more: 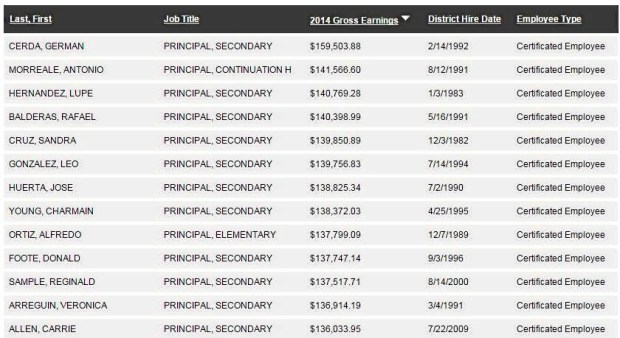 Even for pricey Los Angeles, these are very good salaries, especially when you add the value of their benefits package and the fact that there’s nothing stopping these teachers from taking temporary employment while school’s out. Teachers on the low end also have the opportunity to make more money teaching summer school or doing after school tutoring and coaching once their six hour day is over.

But what are the parents of California’s public school students getting for all this money?

California spends $9,417 per pupil, with the LAUSD spending $10,000 to educate each student, with additional funding for low-income students, English-learners and foster youth.

That puts the state at number 35 in the nation, but that number includes how much is spent for salaries for teachers, administrators and their oversized benefits. Only 29.2% of fourth graders in the state are proficient in math, and only 27.8% are proficient in reading — each the third lowest share of any state. The 8th grade NAEP proficiency: 27.1% (math) 28.4% (reading).

Gotta round those figures up, right?

80 per cent graduate from LAUSD’s high schools according to their figures, but with those low proficiency numbers, we have to know that social promotion has to account for a decent percentage of those graduates.

And these dismal results are what the teacher’s unions want a huge raise for producing!

But wait a minute. What about those overcrowded classrooms? Doesn’t that effect things?

Here are a few factoids to play with.

The Education Trust-West, a non-partisan think tank estimates roughly 250,000 undocumented children between the ages of 3 and 17 are enrolled in California schools, with the highest concentration in Los Angeles County. The group estimates 750,000 K-12 students in California have undocumented parents.

Among other reasons, these parents come to California and Los Angeles schools because it’s a both a sanctuary state and city, and because of policies that shield them from ICE. And then there’s the  vast resources and support provided by the district… and the teachers union.

UTLA has an “Immigrant Rights for Educators Workshop,” for example, to arm union employees with legal information, resources, and “a network of concerned community members and educators who stand up for immigrant students and families.” The union’s Social Justice & Action Resources also shows union members how to “Shield Against Immigrant Detention and Deportation.” And of course, how to vote.

Union members have actively participated in several rallies calling for “Freedom for Immigrants!” and declaring illegal immigrants are “Here to Stay.”

So much for the Union wanting those uncrowded classrooms. In fact, they’re actually encouraging classrooms to become even more crowded.

And here’s another interesting factoid. LAUSD district enrollment numbers show that the overall number of students in public schools has actually been declining.

Student enrollment in LAUSD schools has dropped to about 600,000 students this year, and it’s obvious why. As the failure of many of the LAUSD’s unionized public schools become more and more evident, parents are either going to charter schools, which are mostly non-unionized and have far better stats, or to parochial or private schools which have even better stats.

I can testify to this one myself. I yanked my own kids out of the LAUSD school system as soon as feasible and sent them to a private Jewish day school. Aside from the moral armor and self discipline this provided them with, the school was a totally secure environment with no gangs or problems with theft or acting out. Both religious and secular education were provided by dedicated teachers (non-union) and my children received a first class superior education for a fraction of what the LAUSD spends per pupil. When my kids moved on to high school, they were easily two to three years ahead of what their friends in public schools were studying. I’m certain parents in private schools or parochial schools had similar results.

And an increasing number of parents are opting for homeschooling (which California tried and failed to make illegal) or to independent charter schools, which are typically not unionized. Since 2002-03, the number of students attending charter schools increased from less than 50,000 to well over 100,000 for 2018-19, according to the superintendent of school’s final budget.

So in a very real sense, for the teacher’s union keeping illegal immigrants in LA schools and encouraging even more to come is important when it comes to keeping dues paying  UTLA members employed, since the overall number of students in LAUSD schools has declined to 600,000 this year, As it has declined every year since 2002-03, when it peaked at 746,831 students.

Those ‘crowded classrooms’ these self serving teacher’s union parasites scream about would be a lot less crowded with less illegal migrants, now wouldn’t they? But of course that’s not at all what the teachers Union really wants.

In spite of all this, there’s no doubt in my mind the teacher’s union will eventually get what it wants.

Yesterday, I had business in downtown Los Angeles to attend to. Normally that’s not that much of a problem provided you find parking. As it happened it was a rainy day, which always greatly increases the traffic problem. Yet this was the same day the Democrat run city of Los Angeles acceded to the union’s demand and closed off whole sections of downtown and blocked off major streets so the union could march with their signs. It caused a major mess beyond even what I’ve experienced in New York City. Cars were sitting there without even moving more than a foot at a time if they were fortunate. I actually had to cancel my appointment because the area I was headed for and where parking had been reserved for me was simply inaccessible. And I’m sure I wasn’t alone.

The media, of course, didn’t report much on this, or on the political slant of this march with anti-Trump signs, pussy hats, and pro amnesty signs.

The reason the city of Los Angeles allowed this is simple. Like most public employee unions, the teacher’s union contributes money and manpower exclusively to the Democrats at campaign time.

The teacher’s union has already rejected an offer by the Los Angeles Unified School District to add nearly 1,200 more educators, counselors, nurses and librarians, with hard limits on class sizes. The district also bumped up its previous offer by $24 million, with a proposed 6 percent raise and back pay for the 2017-18 school year…almost exactly what union wanted, but UTLA President Alex Caputo-Pearl described LAUSD’s offer as “woefully inadequate.”

A lot of the union’s signs had the slogan, ‘We’re striking for our students.’ 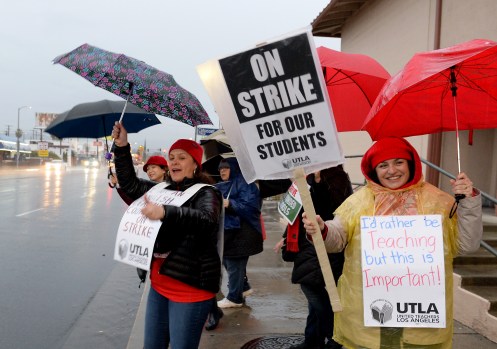 Now you know what the L.A. Teacher’s strike is really all about. And that who they’re really striking for isn’t the students.