People are dying on the streets of Iranian cities. Not people with rifles or stones in their hands: just people who are unhappy with the extremist regime of Ayatollahs. Regime that prefers to spend their people’s money on fomenting terror over the globe and producing more and more weaponry to become a regional superpower.

Accidentally, that same regime that the last POTUS, Barack Hussein Obama II, decided to befriend from the start of his first presidency. We all know how it ended: with a nuclear agreement hardly worth the paper it was written upon and with “Death to America” demos continuing and even increasing in frequency on the streets of Tehran.

And how do the Western progressive liberals respond to the unrest in Iran? My first jaw-dropping experience with that response was via an article in NYT:

How Can Trump Help Iran’s Protesters? Be Quiet.

The headline is quite sufficient to understand the trend, but here is what is probably the main passage of that (frankly revolting) opus:

One reason to worry that Mr. Trump may try to seize the moment by championing the protesters is that it has become an article of faith among President Barack Obama’s critics than in 2009 he missed a golden opportunity to do just that, when many Iranians took to the streets after a disputed election result. But it was never clear what difference American rhetorical support would have made then, other than allowing the Iranian government to depict the protesters as American lackeys, giving the security services more of a pretext to crack down violently.

Of course, this bit of circular logic (or poisonous wisdom, you name it) is applicable to any tyranny in this here world. And, if you learn a bit about the author of this dreck, one Philip Gordon, who appears to be “a senior fellow at the Council on Foreign Relations and an assistant secretary of state and White House coordinator for the Middle East during the Obama administration“, you shall understand better the roots. You shall also understand better what kind of “assistants” the last POTUS has chosen – to sing hosannas to his international politicking…

But this is not about the POTUS, it is about people dying in the streets, to remind you. Something that should be protested and fought against. And I guess it will be vociferously protested if it were to happen on the streets of, say, San Francisco or London or Buda… no, it is too Eastern for the true progressives, let’s say Berlin instead , OK?

Tehran is where all these brown people live, after all. They have their own customs and their own culture, they have that Religion of Peace thing that we are obliged to respect, so it is not our business to stick our noses where our noses definitely don’t belong, right?

And speaking about the right: Mr Gordon here is a living proof, among many others, of how the modern progressive left has made the successful voyage to the place where the ultra-conservative paleocons with their non-involvement motto lay in wait for their victory. Now these two, ostensibly mutually exclusive gangs, could lay down together in the same bed.

Of course, Mr Gordon is only a single example. Here are more, from different (oh well…) media giants (headlines only, you can imagine the contents):

Iran: By supporting protests, Donald Trump may inadvertently be helping the government’s cause

The progressive echo chamber at its full glory. And bless the fact that you can’t smell the said glory as well…

And here is a slightly different source, one Iranian-British citizen, Aaron Bastani, a Labor activist: 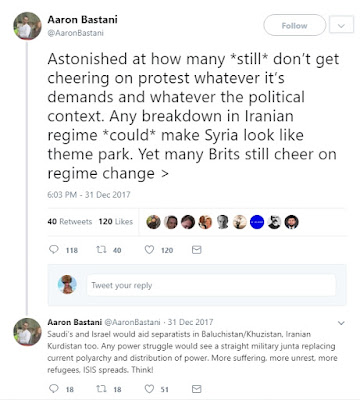 Imploring y’all to desist with your wishes for a change (Remember, the CHANGE?), because the results will be frightful, not to mention the usual suspects fomenting unrest… sweet, ain’t it?

Oh well, so what can we all learn from this progressive thing? Only this, I am afraid:

About Snoopy 19 Articles
Snoopy the Goon grew up in the Soviet Union, and now lives in Israel. He blogs at Simply Jews