By now, many Americans are aware of France’s Socialist President Emanuel Macron’s acid comments to U.S. President Donald Trump about how a new EU Army was needed for protection from, “China, Russia and even the United States of America.”

This was particularly insulting since Macron made his remarks on an occasion when President Trump was in France to commemorate the end of WWI and to honor the American soldiers who fell in places like Belleau Wood and the Argonne Forest and literally saved France from defeat at the hands of the German Army. Without the heroic efforts of those American soldiers,that  last German offensive in 1918 would almost certainly have broken through the exhausted French troops, many of whom had mutinied against their own officers just months ago.

Germany’s Chancellor Angela Merkel was quick to second Macron’s remarks at a speech the very next day to the European Parliament, saying, “we have to work on the vision of one day creating a real European army.”

This is quite interesting. Germany’s Bundeswehr is an under equipped, under manned and under financed joke, and Germany refuses to even meet their NATO commitments financially. As for France, most of their army is stationed within France itself, trying to maintain a semblance of order in France’s cities, and France’s economy is in a dismal recession. To do what Macron and Merkel are planning would cost billions that neither country would likely be able to afford, especially if, as Merkel said, they plan on staying part of NATO.

So what’s behind this call for a new EU Army is actually easy to see if we look at the similarities between Merkel and Macron.

Both are by nature, totalitarians. Macron is a lifelong socialist and EU functionary who was part of the Hollande regime. Angela Merkel was a member of East Germany’s notorious secret police, the STASI. And it’s certainly easy to see these tendencies at work at when you look at how the EU and their individual countries are being run. 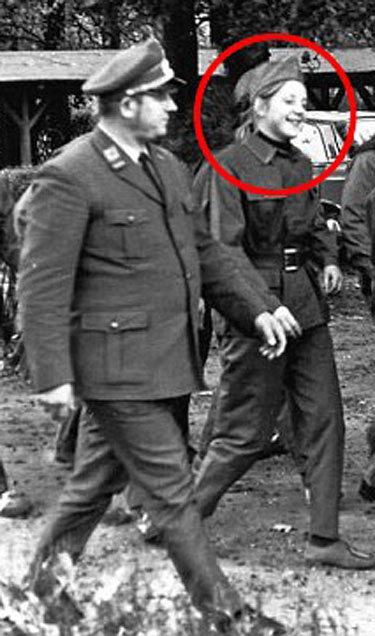 Both are seeing their grip on power severely threatened. Macron’s popularity has plummeted severely, now that the French have begun to realize how badly they were conned and lied to in the last election.  The French are increasingly pessimistic about their future.  And Angela Merkel,while still  Bundeskanzlerin of Germany has seen her own Christian Democratic Union (CDU) party reject her, along with their historic coalition partners, the Bavarian-based Christian Social Union (CSU). Both  are now at record lows in approval ratings, and Merkel probably won’t finish her term unless something drastic happens.

While Macron’s mishandling of France’s economy contributed to his unpopularity, both he and Angela Merkel are deeply unpopular because of the problems caused by Merkel’s decision to open the EU’s borders to Muslim migrants and Macron’s eager acquiescence to that policy for France. For all the efforts of most of the press in these countries, the sexual assaults, violence, vandalism and crime that have occurred are no secret any more to the average German or French citizen.

Both leaders are also childless by choice. People with that mindset  tend to have a very different view of the future than those who have children.

So, let’s put the pieces together, shall we?

The original bright idea Merkel and and other EU leaders had was to solve a growing problem: their native populations were simply not having children and rapidly graying. This tends to happen in socialist countries, and it was particularly true in Germany. And that meant fewer taxpayers to keep the socialist welfare state these countries had created solvent and running. Merkel hit on the idea of importing thousands of Muslim migrants to Germany, most of them young men of military age. She stupidly thought they would assimilate, adopt German culture and become taxpayers to keep Germany’s social welfare system afloat.

What actually happened in both France,Germany and other countries stupid enough to try this is that the vast  majority of these young Muslim men didn’t assimilate at all. After all, their own religion and culture was the best, wasn’t it? Why imitate the kuffars? Nor did they particularly want to work, not when living on the dole gave them a lifestyle far better than they had back home, with free housing, medical care, and a generous cash stipend. And for amusement, there was crime, gang rapes, rioting, gay bashing, attacking Jews and simply behaving overall like the conquerors Mohammed and the Qur’an told them they were.

Merkel and Macron’s new idea is simply a variation on their former one. If they can’t get these migrants off the dole and working, why not conscript them? Which is exactly how the new EU army would be created. While they might not be much use against the Russians, the new EU army could be used to threaten or even to attack EU nations like Hungary, Italy, Austria, Poland, and the Czech Republic who aren’t abiding by the EU’s diktats and bring them to heel. And of course, to discipline any dissidents in their own countries who need to be taught a lesson about co-operating with the New Order. It could also be used to deal with those uppity Jews in Israel who won’t do as they’re told by the EU. And of course, it would get a lot of these migrants off the dole. Given their inherent nature, making them into horde-like shock troops shouldn’t be too hard, should it?

If it works the way they see it working, the entire populist movement in the EU nations can be crushed. And it’s a great way for leaders like Merkel and Macron to stay in power, nicht wahr?

Of course, in reality this would backfire in a hideous way. Armed and trained Muslim migrants aren’t going to obey the orders of their infidel masters for very long.  They will simply use the opportunity they have been given to take over whatever they can manage to conquer and turn it into Dar Islam, which of course they will rule under shariah.

You would think Angela Merkel and Emmanuel Macron would be smart enough to see how badly their last experiment with Muslim Migrants turned out and avoid this sort of thing. But remember, they were dumb enough to do it  in the first place, and to insist on  bringing more migrants in,  even when it became obvious what a huge mistake it was.

And the U.S.? Since much of Western Europe now regards America as  dangerous, would we get involved? It depends.

I’ve seen others write about what a great  thing a new EU army would be, because we could simply take our troops out of Europe and forget about it. They forget that France has nuclear weapons and even some ICBMs and that Germany’s Kiel shipyards are fully capable of building nuclear capable submarines. Would it really be such a great idea to let the Muslims get their hands on them?  So yes we probably would pull at least France out of the fire again, unless we simply decided to bomb the French nuclear facilities and German shipyards and have done with it.

Also, in spite of what Angela Merkel had to say, when as they have their new EU army in place, NATO will  be history. But that isn’t going to apply to Eastern Europe, Italy, and quite possibly the UK if someone like Boris Johnson, David Davis or Dominic Raab takes over from Theresa May, which is very likely. And yes, if they’re attacked, we might see US forces involved.

Let’s hope Merkel and Macron’s idea of an EU army turns out to be just trial balloon with a hole in it. These leaders consider America a greater threat to them than an aggressive Islamist Iran, to the point where they appease the Ayatollahs at every turn and put their hopes in a bogus ‘deal’ Iran never even signed.

Based on that, I wouldn’t count on a new EU Army being on our side in the event things hit the fan.

And connect with him on Linked In

Vassar Bushmills “Trade War” is a term the enemies of Donald Trump use to denigrate his proposals for restoring a balance to American trade policies. Only it’s not “trade war” but trade brinkmanship, which, as it was first used to define JFK’s strategy against the USSR in his years in the White House, were intended [Read More]

France’s Election – A Vote For the Failed Status Quo

May 8, 2017 JoshuaPundit Politics, World Comments Off on France’s Election – A Vote For the Failed Status Quo

The choice has been made, France’s election is over and the French have chosen the status quo. Emmanuelle Macron won in a landslide over Marine Le Pen by better than two to one. Marine Le Pen’s astute and piercing observation, that France was going to be ruled by a woman [Read More]